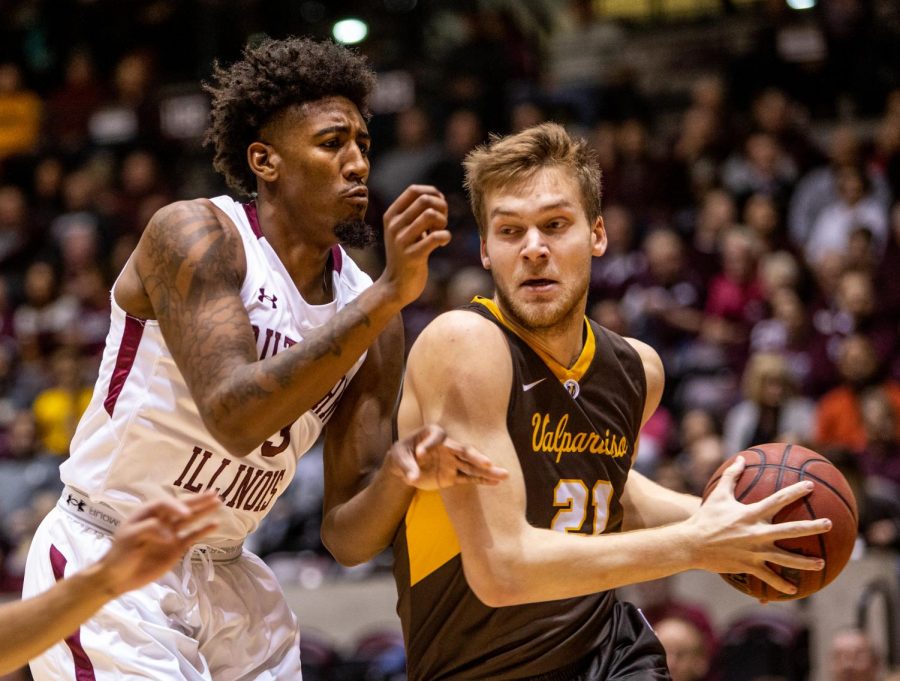 Senior center Kavion Pippen defends the ball, on Saturday, Jan 12, 2019, during the Saluki's 61-65 loss against the Valparaiso Crusaders at the SIU arena.

Prior to this evening’s game, Southern played two conference games in Iowa and returned to Carbondale with a 1-1 record, winning their first matchup against UNI and losing their second against Drake.

After winning tonight’s game Valpo remains the number one team in the conference with an undefeated record in the MVC.

“Anytime in this league that you can get a win, it’s a big deal,” said Valpo head coach Matt Lottich. “Especially against a team as talented and well coached as Southern Illinois is.”

“They did a great job offensively,” Barry Hinson, Southern head coach said. “They knew where they were going to put the ball and they got it there. We just didn’t have an answer for it.”

A put back basket by Fletcher opened scoring for the night.

Fletcher went on to finish the night with a double-double scoring 13 point and pulling down 10 rebounds.

The two teams scored back and forth on the next six possessions with the Crusaders notching two three pointers and a layup on the board, while Southern’s team posted one three pointer from senior guard Sean Lloyd and a dunk from senior center Kavion Pippen.

Two more back-to-back layups from Lloyd and Pippen as well as a three point jumper from Fletcher put the Dawgs up 14-8.

As the game progressed, Valpo seemed to be pulling ahead, outscoring the Salukis four baskets to one, until a fast break dunk by junior point guard Aaron Cook brought the score within one and got SIU fans on their feet.

This excitement was short lived as the Crusaders then went on a 4-0 scoring run to put the Dawgs down 23-32.

“Gaining momentum, then losing it the next second really drains your energy,” Fletcher said. “We did a good job of fighting, but we have to do that for the entire game.”

A tip in by freshman guard Darius Beane added two points to the SIU, but this still left Southern behind with the score at the end of the first half being 25-32.

Valpo came out of the locker room with momentum in the second half scoring two straight baskets on the Saluki defense.

“I think a lot of it was our turnovers,” Fletcher said. “We had a lot of silly turnovers in transition and we lost our man getting back on defense.”

A layup by Pippen and two baskets from Fletcher added seven more points to the SIU effort but fouls called on the Dawgs continued to send the Crusaders to the free throw line and this caused the point deficit to grow even more.

A deep three point jumper by senior center Rudy Stradnieks brought the score within eight points at 37-45, but Valpo continued to put points on the board.

“I think that our bigs today led us, like Pippen and Armon,” Hinson said. “Rudy made a big three for us in the second half, but we have to make more shots.”

Four straight baskets by Pippen seemed to give Southern an edge, but the Crusaders continued to apply pressure to the SIU defense scoring five more buckets to keep them ahead 59-46.

Pippen went on to finish as the team’s high scorer with 23 points.

A three pointer from senior guard Marcus Bartley and a three point play from Beane sparked a Saluki comeback effort.

Two more baskets from Pippen and Cook brought the Dawgs within three points of Valpo giving them the smallest deficit they’d had since the first half.

“We just came out of the huddle wanting to play really aggressive, so that we could come back and take the lead,” Pippen said.

Fletcher was fouled in the last 50 seconds of the game, making only one of his free throws to put the score at 63-61 with the Salukis down by two.

The Crusaders scored another basket in the last seconds of the game to make the score 65-61 taking away Southern’s chance to tie or win the game.

“It was a great play and draw up from their coach,” Fletcher said. “We have to do a better job of seeing the whole floor and being in help side.”

SIU was unable to score any additional baskets as time expired from the clock and they lost the game 61-65.

“The last play of the game was really upsetting because we didn’t have any help on the cut,” Hinson said. “We have to figure out how to guard the basket better.”

Southern will return to the floor again this Tuesday at 6 pm in Redbird Arena to take on Illinois State.

“Tomorrow we have to get ready for ISU,” Fletcher said. “That’s what conference play is all about, not dwelling too long on a bad loss or a good win.”