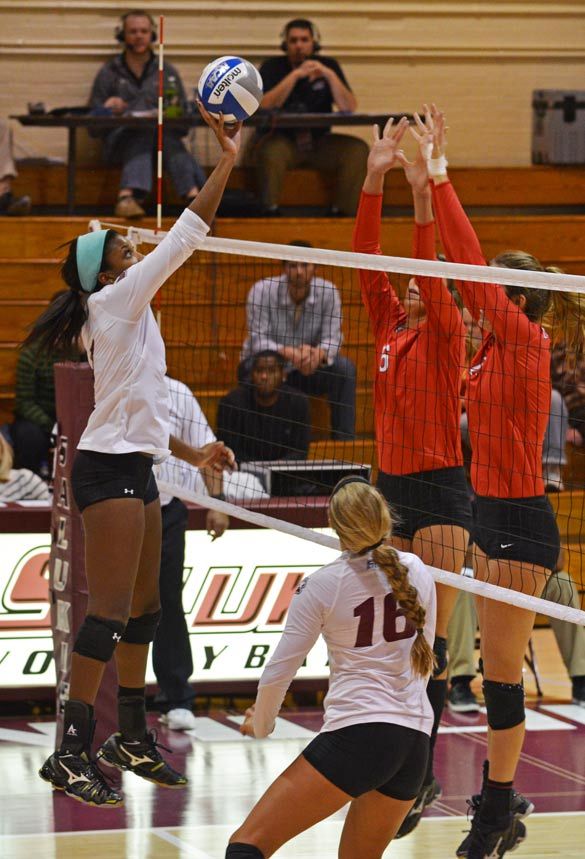 After the final point was lost, coach Justin Ingram said it is going to sting, but his team will have its heads held high.

SIU finished in second place Saturday after falling to the No. 1 seed Wichita State University Shockers in the Missouri Valley Conference Championship tournament.

Ingram said after the season they have had, there is no where to go but up.

The Salukis brought plenty of hardware back to Carbondale after the tournament. Senior outside hitter Jessica Whitehead and sophomore middle blocker Taylor Pippen were both named to the MVC All-Conference First Team. Pippen was also named to the MVC Scholar-Athlete First team.

Pippen said getting those accolades made her want to work harder in the conference tournament.

“It was a really good feeling,” Pippen said. “I wasn’t expecting the First-Team All-Conference so getting that was a great feeling.”

Freshmen Meg Viggars and Hannah Kaminsky were selected to the All-Conference Freshman team and Kaminsky was named the MVC Freshman of the Year.

In the match against Bradley, the first three sets pushed both teams to the brink. The Salukis took the first set 26-24 and were looking to take a two set to none lead. SIU led 24-20 in the second set, but Bradley kept fighting and took the set 28-26. Whitehead had the final kill to win the third set for the Salukis 25-23, and take a two set to one lead.

“The team was really excited because we knew we were going to take this fourth set,” Whitehead said.

SIU cruised to a 25-15 win in the fourth set to grab a spot in the semi-finals. Whitehead led all players with 25 kills in the match while Viggars finished with 10 kills and 10 digs. The win against Bradley was Coach Justin Ingram’s 40th win as a Saluki and his 100th overall.

In beating Bradley, it set up a match against the Panthers of Northern Iowa. The Salukis had already beaten UNI twice this season.

Despite the two wins against the Panthers, Ingram said just as he has all season that any team could lose on any given night.

“I think we need to reset some things and make sure we’re playing a bit more loose, but loose with purpose,” Ingram said.

The Salukis came out strong against Northern Iowa winning the first two sets, 25-21 and 25-20.

Side out percentage, which has been a key stat for Ingram this season, fell below 50 percent in the third set while the Panthers went up to 63 percent. UNI took the third set 25-18.

“Our ability to side out was low in the third set and we struggled with errors and serve receive,” Ingram said.

SIU was able to get key service points from Kaminsky in the fourth set en route to a 25-21 set win and a 3-1 match win. The offense and defense were working for the Salukis in the match. They had three players with double-digit kills and four with double-digit digs.

The Salukis’ final match of the season put them against the Shockers for the third time this season. Wichita State swept SIU in Kansas earlier this season, but SIU was able to get a five-set win at Davies Nov. 2.

SIU had a hard time finding its rhythm from the start of the match. They had a small lead in the first set until the Shockers went on a roll to take the opening set 25-20. The Salukis had a .136 hitting percentage in the match and only had one set where they had a sideout percentage of more than 50 percent. Wichita State took the second set 25-17 and was able to get the sweep with a 25-18 win in the third set.

Whitehead led SIU in kills for every match in the tournament; she had 11 in the championship match and had 55 kills in the tournament. Whitehead and junior defensive specialist Alex Rivera each made the MVC All- Tournament team.

Ingram said the team proved a lot this season.

“When we look back at everything this group has done, these girls are proud, proud of their accomplishments that have happened and certainly the level of play that the group has put forth,” Ingram said.

SIU ends its season with a 20-13 record and will lose three graduating seniors this season, but have the rest of its roster returning.