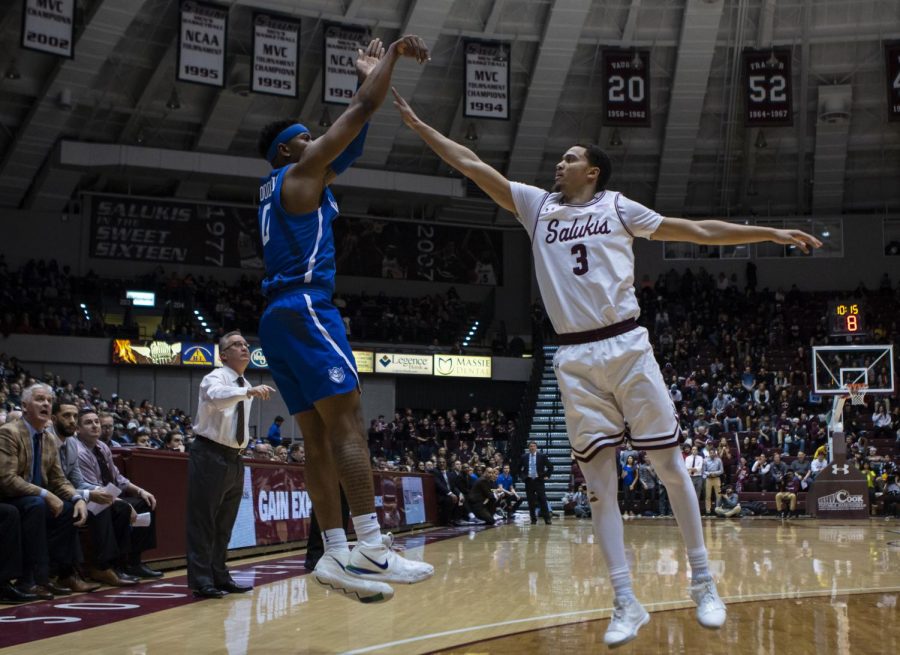 The Salukis have won of five out of their last six games and were on a three-game winning streak coming into the game.

In the all-time series between the two teams SLU holds the advantage with a 30-26 record, the teams have played annually since 2011.

Three of the last four games have been decided by five points or less, with the Dawgs losing last year to the Billikens in St.Louis.

“We talked all week long about toughness, competing and fighting,” head coach Barry Hinson said. “Give credit to St.Louis it’s what you have to do in order to beat those guys.”

After the Salukis came out with an early 4-0 lead with four points from senior center Kavion Pippen, SLU scored four points on two layups to knot the score at 4-4.

Senior guard Sean Lloyd Jr. was fouled on a drive to the rim, in which he made both of his free throws to put Southern ahead 8-4.

Pippen scored his sixth point of the game on a putback layup to keep the Dawgs ahead 12-8 with 12:07 left in the half.

Pippen hit a jumper to maintain the SIU lead, but the Billikens responded with a three-pointer to make it 15-13 with 9:20 left in the half.

Senior guard Marcus Bartley turned it over to give Saint Louis their first lead of the game at 20-19, but Bartley responded with a layup to regain the lead for Southern at 21-20.

Senior forward Armon Fletcher made a jumper to pull out to a 23-20 lead, but the Billikens scored on a three-pointer to knot the score up at 23-23 with 3:48 left in the half.

After the timeout freshman guard Darius Beane scored to put SIU back ahead and a turnover by SLU led to a basket by junior guard Eric McGill to make it 27-23 with less than two minutes left in the half.

Junior guard Aaron Cook fouled sophomore guard Jordan Goodwin of SLU with one second left in the half, but the Billikens were unable to convert as Southern led at halftime 27-23.

Pippen traveled in the post coming out of halftime to turn it over to Saint Louis and the Billikens scored on a three-pointer to pull within one at 27-26.

Pippen finished with ten points and five rebounds for Southern.

Pippen dunked it off an assist by Bartley, the Billikens turned it over on the following play which led to a score by Lloyd after he rebounded it to put Southern ahead 39-34.

Saint Louis was within one early in the second half but a 7-0 run led by Fletcher with three points to make it 42-34.

“You train to keep shooting through the misses and not get down on yourself,” Fletcher said. “That’s what great players do they think next play next shot.”

A layup and a three-pointer by Lloyd pushed the SIU lead out to ten with less than eight minutes left in the game at 50-40.

“Once you see one of your teammates knock down a three,” Fletcher said. “It propels everybody, you get the bench going, the crowd going.”

Lloyd finished with 13 points and nine rebounds for the Dawgs.

Bartley hit his first three-pointer of the game to extend the Southern lead to 53-41 with 6:45 left in the game.

Fletcher got the assist on an alley-oop to senior forward Thik Bol which maintained the lead for the Salukis at 56-46 with less than five minutes in the game.

Bol finished the game with six points and five blocks for Southern.

“I came in there thinking to block everything,” Bol said. “That’s what the coaches told me to do before the game.”

All of Bol’s five blocks came within the last five minutes of the game and the Dawg Pound responded to it with chants of M-V-P.

“It’s been a long time since I’ve been in a game where a guy literally in eight possessions just changed it all by himself,” Hinson said. “What Thik Bol did tonight was as impressive as I’ve seen on the defensive end.”

After a three-pointer by SLU the lead was 56-52 for Southern with 56 seconds left in the game.

A foul by Saint Louis put the Salukis into the double bonus where Fletcher made both of his free throws to give SIU the 60-54 lead with 35 seconds left.

Fletcher finished tied in the team lead for points with 13 and contributed five rebounds for SIU.

Fletcher made one of his two free throws to give the Salukis the win over the Billikens 61-56 extending the win streak to four games.

“If I’d told you we were going to beat Saint Louis by five points before the game started, everyone would be happy,” Hinson said.

SIU will be back in action Saturday at SEMO with tip-off set for 6:30 p.m. in Cape Girardeau.