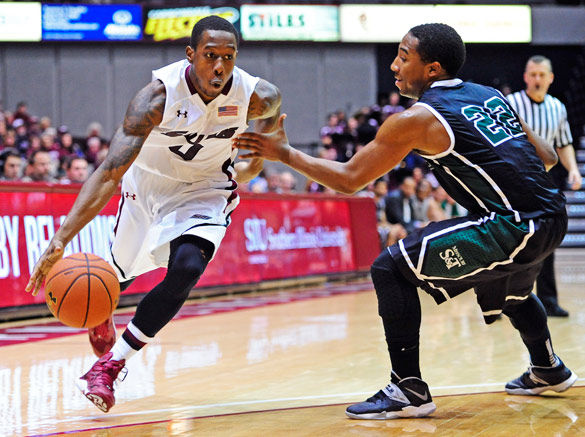 For the first time in 11 meetings, the Cougars of Chicago State University beat the Salukis, as SIU had a season-high seven 3-pointers in the game.

SIU (2-6) wrapped up a tough stretch Saturday during which they played six games in 11 days. Chicago State (3-4) took full advantage of the situation to get an 88-84 win in front of its home fans.

It has not been the start SIU fans expected, considering the last time the Salukis started 2-6 was the 1985-1986 season.

“When you’re not very tough, you don’t play with a lot of energy and you don’t communicate, those are three ingredients for an unsuccessful recipe,” Hinson said. “We’re not playing very good basketball right now.”

The first half looked as if it was going to end well for the Salukis, and they would only trail by three heading into halftime, but Chicago State’s Quinton Pippen hit a 3-pointer with one second left to put the Cougars ahead at the midway point, 39-33.

Hinson said some players on his team lack the ability to play solid defense; it showed in the second half.

“We didn’t guard,” Hinson said. “We looked like we’re standing in concrete the entire second half.”

SIU’s only lead of the game came with 16:54 left when senior guard Desmar Jackson scored on a layup to put the Salukis up 43-42. Jackson finished with 22 points, 20 came in the second half.

Junior guard Mike Balogun came into the game shooting 6-of-19 from the 3-point line and tallied a season-high 21 points in the loss and five 3-pointers.

Every time SIU would shorten the Cougar lead, Chicago State would answer.

“We made a couple of runs there, but every time they hit back at us, we wouldn’t hit back,” Hinson said.

The Cougars had six players score at least 10 points with Pippen leading them with 17. SIU was out-rebounded 32-28 in the loss.

Hinson said he takes the blame for the way his team has been playing.

The Salukis have the week off before they welcome the Hilltoppers of Western Kentucky University Saturday at SIU Arena.

Hinson said he knew the schedule his team had in place was not going to be easy, but they will have time to work on things in the coming weeks.

“Our schedule wasn’t really conducive to start off with a lot of success,” Hinson said. “We got ourselves beat up. We don’t have a lot of confidence right now. We have a stretch here where we can get a lot of practice.”