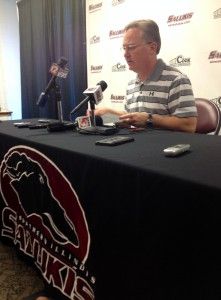 Hinson said he regrets singling out one player but he stands behind his other comments.

Sophomore guard Marcus Fillyaw said he didn’t agree with the jokes Hinson made during the rant, but he did agree with Hinson’s critique of his play on the court.

“His statement about me was accurate, about my performance,” Fillyaw said. “It was embarrassing that the whole world knows now.”

Hinson said he made a mistake speaking about Fillyaw during the press conference at Murray State.

“I take full responsibility for it, I should not have done it,” Hinson said. “I apologized to him personally and I apologized to the team for singling out an individual.”

Fillyaw said Hinson has always told them he wears his emotions on his sleeve and everyone was down after the loss.

“I know he’s going to be upset after that game, I was upset, our whole team was upset,” Fillyaw said. “It’s not really a huge surprise.”

During the 18 minute press conference, Hinson seemed almost choked up at various times.

Hinson said if people have a problem with being called “momma boy’s” then they can’t come to southern Illinois.

The Salukis battle Ball State University Saturday and Hinson said after the game he’ll walk into the press conference and be exactly who he has been.

Hinson said he’s not going to apologize for being passionate and energetic.

“I will not apologize for loving my players and coaching them and demanding the best out of them on a daily basis,” Hinson said. “Whether it be on the floor or off the floor.”

Hinson said he is a specific type of person right now and he doesn’t look for that to change in the future.

“I am old-school, I wear that banner, I wear it proudly,” Hinson said. “Although it gets me in trouble, I’m not going to change, I’m always going to be old-school. I’m going to be the guy that thought viral meant somebody had a virus.”

Tyler Dixon can be reached at [email protected] or tdixon_de on Twitter.