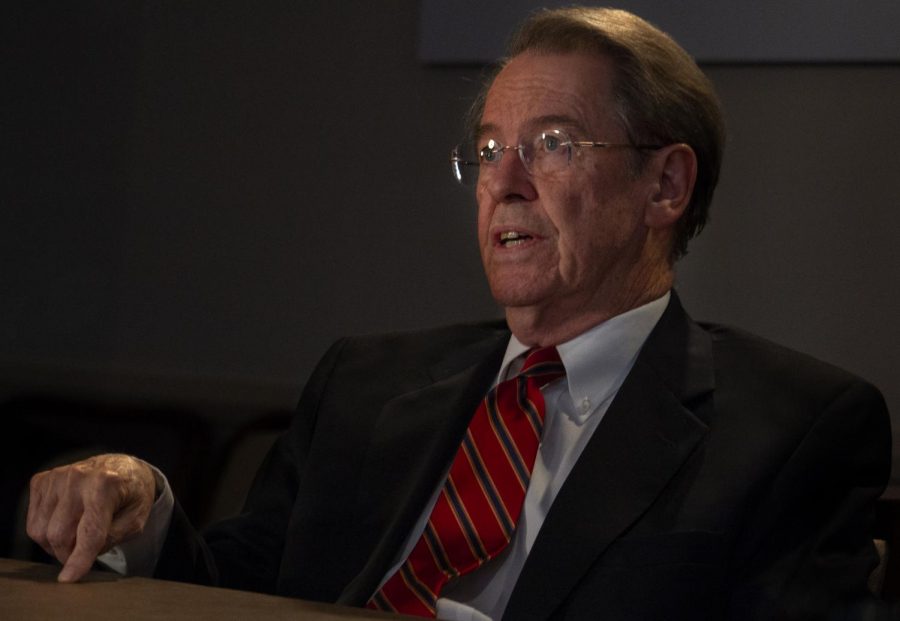 “I honestly don’t think it is going to impact them very much at all,” Dorsey said. “[…]  I think there is going to be a lot of changing signs on doors but the processes should remain very similar, and hopefully intuitive for students as well, change is hard.”

When asked if students would have input in the selection of the next permanent chancellor, Dorsey said the search committee would have representatives from a lot of different faculty, staff and student groups.

“I think they wind up having a look at candidates and typically there are open forums where a candidate is trotted in and I think to a certain extent, we have gotten almost too good at this,” Dorsey said.

Students were also concerned about when results of the fee allocation study would be available, and what the president’s office will do when the results suggest a change.

The fee allocation study, is completed by an outside independent firm, that was hired to determine how funds should be distributed throughout the SIU system.

According to President Dorsey, historically the splitting of funds between Carbondale and Edwardsville is 60-40.

Dorsey said the firm would have information to report by April.

When asked about the current financial state of SIU, Dorsey said SIU’s two main sources of revenue, tuition and state funding, were not doing well.

“What really crippled all of the state institutions was […] when they said alright you are supposed to get however many million it was and we got 29 percent of what we were allocated,” Dorsey said.

That is a problem, Dorsey said. The Carbondale campus was in a pretty substantial hole, I don’t remember what it was maybe 74 million.

“The state budget for this next year is likely to be good, people have talked about increases in the teens, others closer to 10 percent,” Dorsey said. “It would not surprise me if we got an 8 percent or more increase.”

Dorsey said Carbondale is still paying off debt to the system and will be for the next few years.

“An increase is a godsend. But the problem is we have got a lot to pay back, and as you know, nationwide the number of students is declining, so we can’t count on that.”

Another question was: How can a University strive for diversity and inclusion, but not promote classes like Africana studies and Women, Gender, Sexuality Studies, that target against oppression to minority groups?

“That is a complex question. How do you strive for diversity?” Dorsey said. “You have to have a culture that is welcoming and I think we have got an inherent problem on this campus.”

Dorsey described SIU as rural and below the Mason Dixon line, surrounded by sparsely populated towns with a mostly white population.

When asked what it meant to have a commitment to diversity and how he saw himself demonstrating it, Dorsey said to judge people as individuals, not as groups or stereotypes, and to give everyone a chance.

“I think [in] judging everybody as an individual, [it] would help that we have a critical mass, so we don’t just have one of this or one of that,” Dorsey said. “There is somebody else in the room that looks like me so I can feel supported, not alone, and not be worried that they are all against me as it were. I try to hire chairmen, associate deans that way.”

A student question asked why SIU was so segregated, Student Trustee Brione Lockett further explained this question to President Dorsey and said the question was asked because the large majority of administration is white.

Dorsey said he didn’t know why.

“If I had the answer I probably would have taken the show on the road and told people about it. I depend on people like you to give me suggestions and concerns,” Dorsey said. “I am no wizard.”

Staff reporter Kallie Cox can be reached at [email protected].