Madison Riden: The ‘mom’ of the Marching Salukis 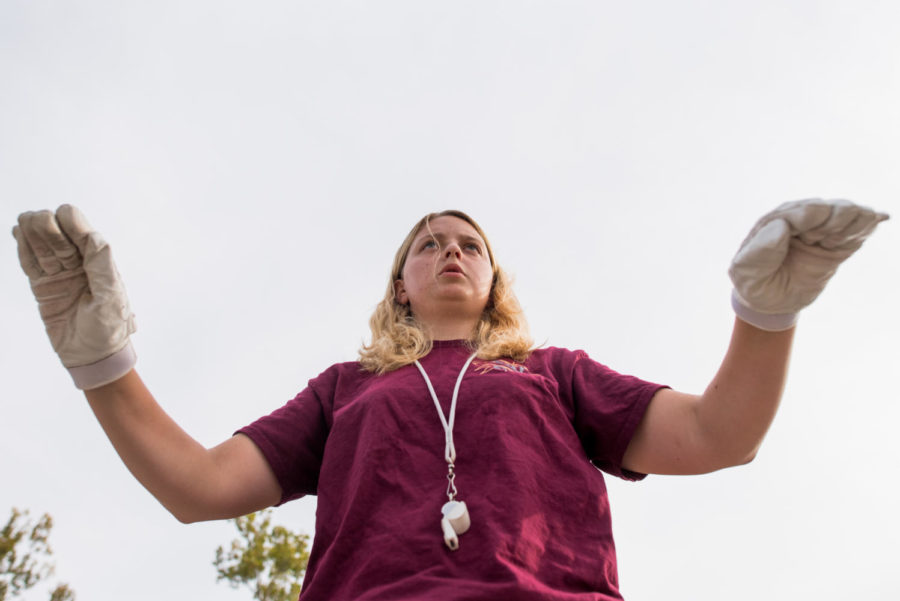 Madison Riden has been one of the two Marching Salukis drum majors for the past two years.

“I would say that my experience is pretty complete here,” Riden, a senior studying anthropology, said. “I went from being a normal member to a section leader to two years as drum major, which was an honor to get two years back-to-back because it’s very rare that Dr. George Brozak does that.”

This past season was her second and final year serving the band as a drum major.

“I’ve worked with Madison for two years, so it has been really nice getting a rhythm with her going,” Tristan Osterhues, a junior studying music education and a drum major, said. “We are kind of hive-minded a little bit.”

Riden said she started off playing the trumpet, but switched to baritone in the last two years of high school. She’s been playing baritone ever since.

Riden said transferring over to college was easy because being in band is something that she really loves to do.

“I didn’t really see a reason not to join the Marching Salukis,” Riden said. “I enjoyed marching band all throughout high school, and I knew that it would be the same kind of communal sense of family that it was in high school.”

Riden said she was never drum major in high school.

“I did audition, but I didn’t get in. The only leadership role I had in high school was that I was a section leader of the baritones my senior year,” Riden said.

Riden said she felt like she could do more for the Marching Salukis.

“I was always taught that the best way to lead something is to serve them,” Riden said. “So, I thought trying out for drum major or even getting it was a good way to serve the band, and give it my all.”

Emma Wallander, a former Marching Saluki and a recent SIU graduate, said Riden was like a mom for the entire band.

“She’s very patient, very organized and gets along with everybody,” Wallander said.

Trystan Anderson, a senior studying communications studies, said Riden was such a great leader for the Marching Salukis.

“I was lucky to work with her these last few years as a section leader under her leadership as drum major,” Anderson said. “Maddie was always looking for ways to improve herself as a drum major and leader.”

Riden said there are multiple positives of being a drum major.

“One is that there’s a lot of respect that comes with it, and I appreciate that,” Riden said.

However, Riden said it’s a lot of pressure and a lot of stress involved with the title and the job.

“Whenever there is a problem, automatically some of the blame is going to be on you, that’s just the thing that happens,” Riden said. “It’s very physically exhausting, which it doesn’t seem like it because we’re not holding an instrument, but I just started physical therapy because of how rough it has been this semester.”

Rachel Brady, a senior studying music and a former drum major, said even as a freshman, Riden jumped in with both feet and was frequently asking how she could help Brady and the other staff.

“She was never someone that needed their hand held,” Brady said.

Brady said as a former drum major she can say the job requires a lot of time.

“The other members of the band may not see or be aware of that,” Brady said. “If rehearsals are running smoothly that means the drum majors are doing their job and frequently others’ jobs as well.”

Riden said her favorite moments of being a drum major are the one-on-one teaching moments.

“I really love the moments where you see that light bulb go off in their head,” Riden said. “Those are always the most rewarding experiences for me.”

Anderson said Riden is such a joy to be around. She is always putting the well being of the organization first and is always willing to do whatever it takes to make it better.

“I’ll miss the groove we have,” Osterhues said.

Riden said it really hard closing that chapter of her life right now.

“I’ve been in band for 12 years, and it has been such a huge, amazing part of my life,” Riden said. “So, I’m going to miss performing, learning drill, getting to see everyone everyday and doing something that I love to do. I’m going to miss all of it.”