Nathan Colombo, a board director of the Varsity Center, announces his run for Mayor of Carbondale 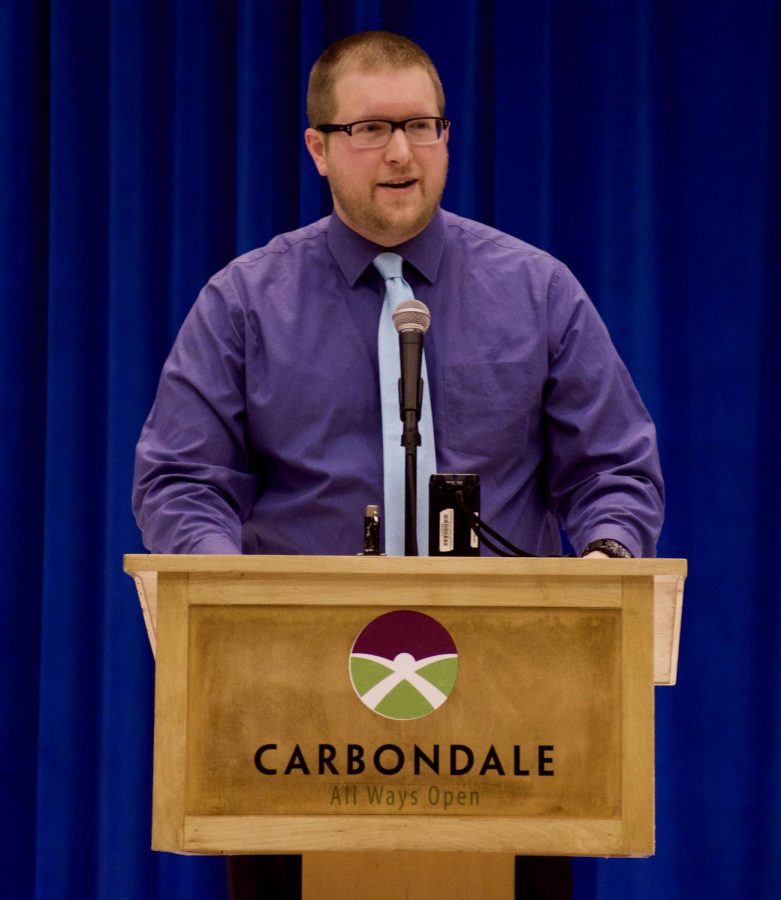 Nathan Colombo, a board director of the Varsity Center, announced his campaign for Carbondale mayor on Monday.

He said his campaign for mayor will see a number of different activities designed to increase engagement from folks throughout the community.

“Whether it’s going to houses and having small group conversations, visiting businesses and having industry discussions or having events and inviting students to come to participate,” Colombo said.

Colombo said he’s a comedian and entertainer which allows him to throw a party to get people out and engaged.

Colombo’s main goal overall is to restore public confidence in municipal policymaking from a city perspective, he said.

“I’ve been working on it for the last two years, trying to get it through and in this particular case we’ve got an SIU alumnus who works for the top 20 YouTube channels in the world,” Colombo said. “[This alumnus] has created a script and offered us the opportunity to come here and produce this video for free.”

Colombo also said he thinks about seizing opportunities that we have with all of our alumni and their connections, he can ask them for just “sweat equity.”

“Not their money, [but] asking for their time that will afford us the ability to reach out to a new generation that we want to see come to SIU, Carbondale,” Colombo said.

Colombo said he believes what needs to be changed in relation to what current Carbondale Mayor Mike Henry is doing, is better engagement with the city’s public.

“One of the reasons I’m running is because I brought considerable issues with the city’s logo and branding project council and felt repeatedly denied by Mike Henry specifically,” Colombo said.

Colombo also said because of those interactions he was driven to seek the mayoral office against Henry.

“I think that by simply electing the youngest mayor that Carbondale will ever have we will see an immediate revitalization of attitude in our city,” Colombo said. “People are saying I feel the energy.”

Colombo also said this will make residents want to follow along in rebuilding our city and maintaining that Carbondale experience.

“That many of the folks here now have experienced long before I was even born,” Colombo said.

Colombo said as a municipality Carbondale needs to market itself to citizen climate refugees to combat Southern Illinois’ decline in population.

Colombo said that’s one of the reasons he brought on board a former SIU student trustee to help run the campaign.

“I decided to join Colombo in his endeavors toward running for Mayor of Carbondale because he wants what is best for the community and seeks to explore innovative ideas toward making Carbondale more marketable to the outside world,” Naomi Tolbert, Colombo’s campaign manager said.

Tolbert also said over the last few months she has received the chance to learn of his great character and authentic love of Carbondale.

“He is a good candidate because he is committed to this city and is cognizant of the importance to the inclusion of all of the various voices existing within town,” Tolbert said.

Tolbert said if Colombo is chosen, she does not doubt he will do what is needed to lead successfully and produce better economic outcomes for the community.

“[He will also], increase positive relations with the SIUC campus and continue to incorporate the voices of the people within all legislation passed on the council,” Tolbert said. “I would say Carbondale deserves a breath of fresh air.”

Colombo said in regard to students specifically, his campaign is centered on giving them a seat at the political table.

“They’re a big reason why Carbondale is even here and for too long there has been a disconnect between the student body and our municipal government,” Colombo said.

Colombo also said finding a way to bridge that gap is going to be very important in this campaign.

“We have a lot of work to do […] partnering with the university is a huge one,” Hennrich said.

Hennrich also said the current mayor has threatened to fire him because he doesn’t like him, but Henry says he wants someone with fresher ideas.

“I’ve got a great way for the mayor to get rid of me on the Human Relations Commission, all he has to do is vote for me for City Council,” Hennrich said.

Hennrich said there is currently no way for the Mayor, city council or city manager to put an item on the agenda so people can redress their grievances with the government.

“If there’s only one function of a governmental body that’s suppose to represent the people it’s to be able to vote on the things that people bring before them,” Hennrich said.