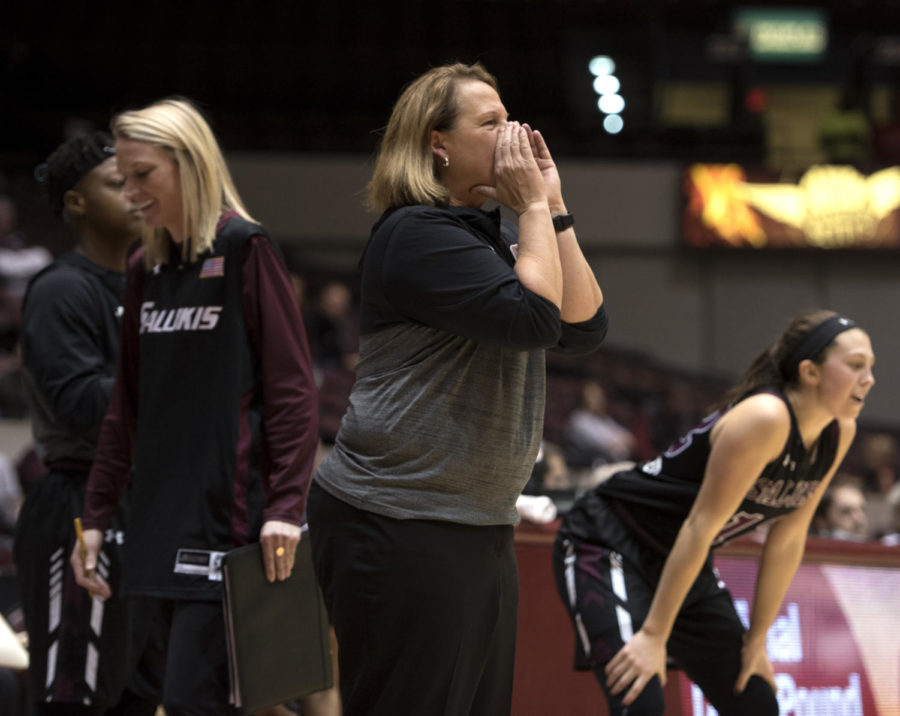 Head coach Cindy Stein calls out to her players during overtime Friday, Jan. 26, 2018, during the Salukis' 71-69 win over the Missouri State University Bears at SIU Arena. (Reagan Gavin | @RGavin_DE)

The Southern women’s basketball team (1-1) won against  Southeast Missouri State (0-3) 60-40 in the home opener for the Salukis.

The game marked the annual field trip day for the Dawgs, where students from around southern Illinois were welcome to attend the game free of charge.

The Dawgs also marked this game as their Military appreciation game and took time within the game to allow all veterans to stand and be recognized for their service.

This game was the home opener for Southern and they have won four straight home openers under head coach Cindy Stein including last years win over UT Martin.

SIU has won four straight games against the Redhawks as the Dawgs have a 28-7 record all-time against SEMO in a series that dates back to 1961.

The last time the two teams met the Salukis claimed a 79-74 over the Redhawks in overtime at Southeast Missouri State.

Both teams were searching for their first win on the young season, as SEMO fell to Missouri Valley Conference foe Bradley 85-79 on Saturday.

Southern was looking to take a win after the 95-94 loss at UT Martin on Friday.

A cut down the middle of the lane by junior forward Nicole Martin put SIU on the board first making it 2-0.

Martin finished with the team lead in points with 19 and eight rebounds.

After Martin made one of two free throws the Redhawks answered with a three-pointer to tie it up 3-3 early in the first quarter.

After a layup by junior forward Jocelyn Taylor SEMO pulled out to a 7-3 lead over Southern with 5:38 left in the first quarter.

“I thought we started trying to win the game in the first two minutes,” Stein said. “The energy of the kids kind of got to us.”

After a backdoor pass by freshman guard, Taelour Pruitt for an assist the Redhawks extended their lead to 15-3 with just under two minutes left in the first quarter.

“They came out pretty hot,” sophomore forward Abby Brockmeyer said. “They were denying everything to begin with, they guarded the ball screen well.”

SEMO fouled junior guard Kristen Nelson on a layup which she made and then she made the free throw to make it a three-point play making it 15-8 for the Redhawks.

The elementary students in attendance started multiple SIU chants in the first quarter which ended with SIU pulling within seven to make it 15-8.

“We came out pretty slow, I think our defense was really slacking,” Brockmeyer said. “We came into a huddle and Coach Stein said we gotta get together.”

A rebound by Brockmeyer resulted in a three-pointer for her for the first points of the second quarter pulling Southern within four to make it 15-11.

Junior guard Brittney Patrick stole it and scored on a layup to knot the score up at 15-15 for SIU with 8:49 left in the half.

After the early lead by the Redhawks in the first quarter the Salukis responded with a 16-0 run fueled by multiple turnovers by SEMO to open up a 19-15 lead midway through the second quarter.

“Towards the end of the first half, they started getting gassed too, so we started to run them,” Martin said.

SEMO recorded their first points in the second quarter on a layup with 4:37 left in the half to make it 21-17 Southern.

SIU held the Redhawks to only five points in the second quarter which tied the school record for points allowed in a quarter since the 2015-2016 season when the NCAA went to quarters.

“We got back into the game because of our defense,” Stein said. “Our defense is what got our offense going.”

The Southern defense forced 15 turnovers in the first half which helped to spur a 22-5 run for the Dawgs to put them up at halftime 25-20.

“Coach Stein stressed defense,” Martin said. “I feel like we came out on d but they came out as well.”

Silvey finished with 17 points and three steals for Southern

Southeast Missouri State made one of their two free throws after a foul by junior guard Kristen Nelson to slim the Southern lead to 39-29 with 2:19 left in the third quarter.

An assist by Martin to Brockmeyer put SIU on the board first in the fourth quarter to make it 44-34 for the Salukis.

Brockmeyer finished with the team lead in rebounds with 13 and 11 points with two blocks for the Dawgs.

Brockmeyer made a layup and was fouled, and she made the free throw after the foul to push the Southern lead out to 49-36 with 6:24 left in the game.

Silvey made two free throws with just over six minutes remaining to make it 51-36 for SIU in the final quarter.

A foul by the Redhawks brought Brockmeyer to the line with less than three minutes remaining as she made one of two free throws to make it 57-40 for Southern.

Nelson dribbled out the rest of the clock for the Salukis as they claimed the victory in their home opener on field trip day over SEMO 60-40.

“This team works really hard, so it would have been disappointing to not come out victorious,” Stein said. “We’re so close to being really really good.”

The Salukis will be back in action on Saturday, Nov. 17 at SIU Arena against Marshall, tip off is set for 2 p.m.