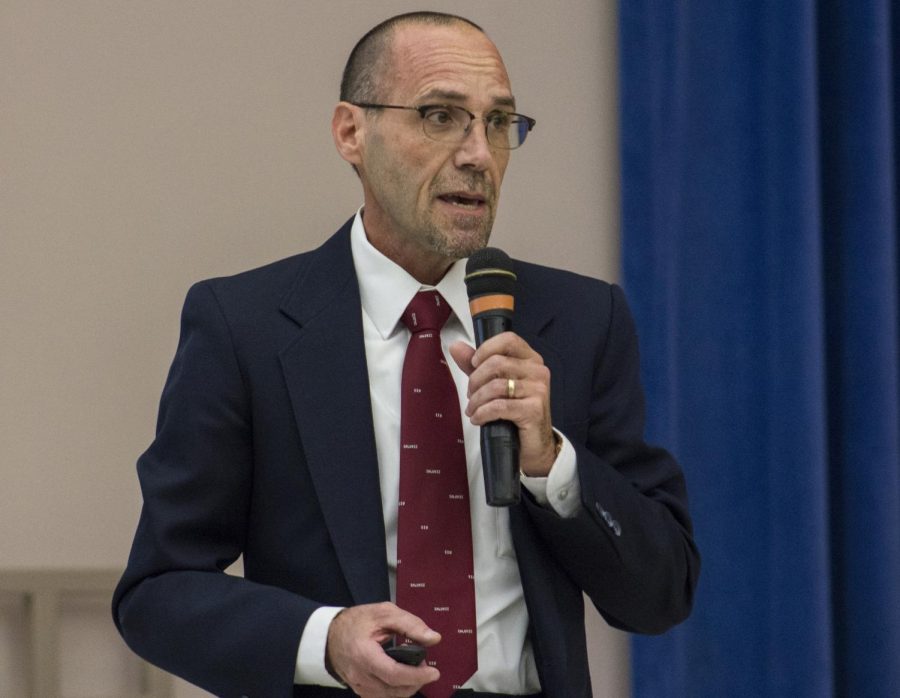 Scott Ishman, the interim dean of the college of science at SIU speaks to the Carbondale City Council, Tuesday, Nov. 13, 2018 inside the Carbondale Civic Center. (Isabel Miller | @IsabelMillerDE)

Ishman was one of six SIU faculty members who were sent by Chancellor Montemagno to Arizona State University in April to learn from their faculty, staff, and administrators about the process they took to improve their college.

Ishman said Arizona State University went through a major transformation and is now the top university in the state.

“They were seeing very similar issues that we are here,” Mike Eichholz, an associate professor of zoology, said. “They had declining population, funding was going down, so they were going through almost exactly what we are.”

Jerrold Hennrich, Human Relations Commission chair, asked whether the university was considering decreasing tuition costs. Lowering tuition rates was one of the points of discussion brought up at the Commission’s Sept. 13 roundtable discussion.

“With our enrollment numbers now, it’s very difficult to do that and be able to maintain the quality of education that we’ve historically been able to provide,” Ishman said. “Unless we come up with some other revenue stream that can replace that reduction in tuition, that’s going to be difficult to accomplish.”

Eichholz said one of the things Arizona State president did was recognize that universities need many different revenue streams. He said currently about 20 percent of SIU’s funding comes from the state.

“The chancellor’s goal was actually to wean us off the state budget completely in ten years,” Eichholz said. “If we can do that, then we don’t have to worry about the budget.”

Hennrich also questioned a statement Ishman made about enrollment not being a part of SIU’s mission.

“I just can’t believe… you said the mission is not to increase enrollment,” Hennrich said. “That’s a huge thing that we need to do; that doesn’t make any sense.”

Eichholz said the statement meant SIU needs to focus on the actual mission statement first and enrollment would follow. He said some previous chancellors have tried using what he refers to as “cheap tricks” to try and increase enrollment.

“If we achieve that mission, enrollment will increase,” Eichholz said. “I think all of us are confident that will happen.”

The group has contacted 28 regional chambers of commerce and has upcoming presentations scheduled with three so far.

Staff reporter Rana Schenke can be reached at [email protected].