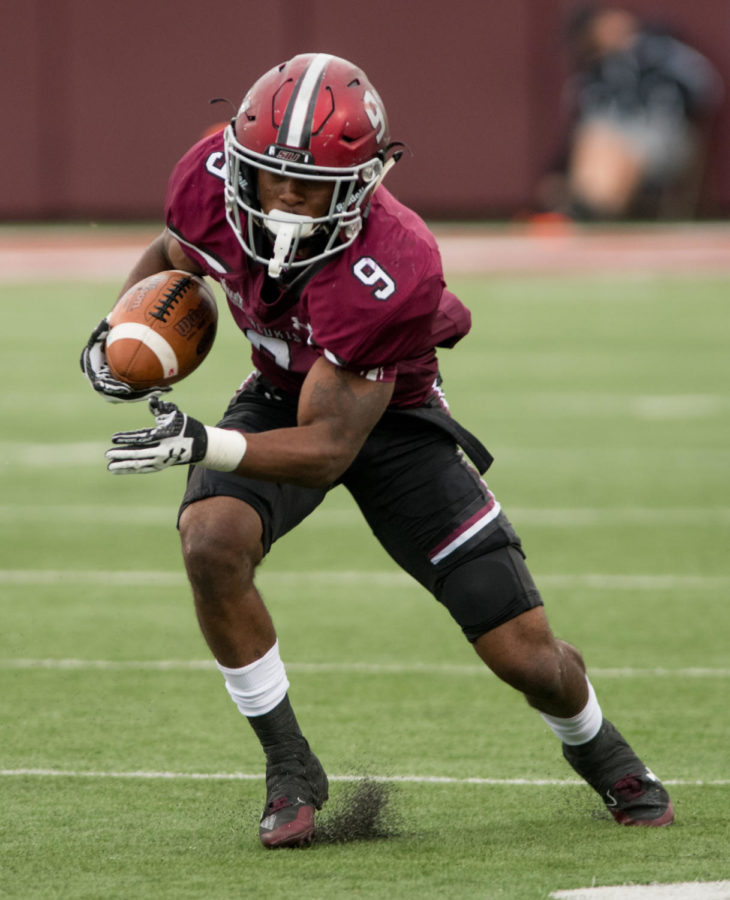 Junior running back D.J. Davis has shown to be an all around player for the Salukis, as he leads the MVFC in all purpose yards.

Davis is from Pompano Beach, Florida, from a family of six with three brothers and one sister.

“I have four siblings,” Davis said. “Three brothers and one sister, I’m the middle child.”

Davis is the only member of his family that is currently involved in collegiate sports, however there is a rich sporting heritage within his own family including an NFL player in Eddie Jackson.

“I have a cousin, he was at Alabama,” Davis said. “Now he’s playing for the Chicago Bears.”

Even from a young age Davis was willing to take the hard hits in football, and the first time he used equipment he was scared.

“I was five years old, my first year playing football,” Davis said. “I was terrified when we first started using equipment, and started hitting in pads.”

From the age of six he knew that football was his sport as he adjusted to wearing the pads and excelling in the sport.

“I was six or seven years old,” Davis said. “And dominantly one of the best players in the league.”

Davis enjoys the camaraderie found in football and how a group of men can come together and be like family.

“It’s a group of guys coming together, becoming one, a family,” Davis said. “It’s like a big family away from home, I have a hundred brothers.”

In high school the Florida native proved to be a versatile player lining up in several positions in all aspects of the game.

Davis’ speed in high school transitioned to the track field his freshman and sophomore year of high school.

“I just ran track my freshman and sophomore year,” Davis said “The one hundred [meter] and the four by one.”

Even though his high school team made it to state in back to back years, he remembers the second round of the playoffs fondly.

“My playoff game,second round there were 17 seconds left on a fourth and long,” Davis said. “We did a hail mary to me that won the game.”

At the end of his high school year only two Missouri Valley football conference teams were willing to give him a scholarship.

“I had Southern, Western [Western Illinois], that was basically it,” Davis said.

Running backs coach Nate Griffin loved the athleticism and Davis’s approach to the game, even in high school.

“He had all the attributes you wanted,” Griffin said. “Not just athletically but his mental side is a huge part of why he’s successful.”

Senior running back Jonathan Mixon also appreciates the mental approach that Davis brings on and off the field.

“His mental capacity, he is a really smart player,” Mixon said. “Off the field when we’re in the room going over plays, he’s the main one asking questions.”

Davis chose SIU over Western Illinois because of how the coaches made him feel, throughout the whole recruiting process.

“The love I got from the coaches, like Coach Griff and Coach Hill,” Davis said. “I trusted them throughout the whole process, they’re a man of their words.”

In his freshman campaign in 2016 Davis managed to lead the team in all purpose yards, even though he did not start in any of the 11 games.

“Taking advantage of every opportunity, seizing the moment,” Davis said. “However I could help the team out, that was the mindset I had.”

The success he had on the field his freshman year earned him Honorable Mention MVFC as a return specialist, and a place on the all MVFC Newcomer team.

“It was kind of surreal, I wasn’t surprised,” Davis said. “I knew all the hard work I put into this game was going to pay off in this game.”

In his sophomore campaign Davis was once again named Honorable Mention MVFC as a return specialist as he also led the conference running backs in receptions with 35.

“I went at it ten times harder, I didn’t change up much,” Davis said. “I just focused on a couple things that I needed to improve in my game.”

As far as how he looked to make an impact this year, Davis looked to show the league that he was much more than a return specialist.

“I kind of had a chip on my shoulder, because I was being labeled as a return specialist,” Davis said. “So once I got the opportunity to start at running back, I wanted to show the league I can be a true running back.”

During his time here at Southern, Davis looked back to his freshman year when he returned a kickoff for a touchdown as a one of his best memories.

“My freshman year, opening kickoff, Murray State,” Davis said. “When I took it to the house.”

Davis has fit in well with the running backs even since his freshman year and has gotten faster, and stronger.

“When he came in he fit right in,” Mixon said. ”He has definitely grown a lot in the weight room, and is more explosive.”

Davis has grown mentally to the game as well, and taken steps to be that leader on the field and to be vocal.

“Mentally, he is always up in my room watching film, taking notes,” Griffin said. “He knows what is going on, this year he’s starting to take steps to becoming a leader, he’s not a young kid anymore.”

Even from the beginning of the year the running backs coach challenged Davis to step into that leadership role and to be vocal.

“I think the biggest thing was being a leader, being vocal,” Griffin said. “Taking people under his wing and being the voice of the coaches and what we’re trying to do.”

Off the field Davis is known as a man full of character who truly cares about his teammates, and genuinely loves the game.

“His heart, his personality, he is a funny kid,” Griffin said. “He’s very passionate about the game, he loves all of his teammates and he’s a funny guy.”

After the South Dakota State game on Saturday, Davis eclipsed 1,097 rushing yards for the season, making him the first running back at Southern to do so since 2011.

Even after the accomplishment in the post game press conference Davis gave credit to the offensive line.

“All glory goes to God,” Davis said in the postgame press conference. “I got to thank my coaches and my O-line, I got this for them, we are celebrating this together.”

Mixon has seen the progression of Davis since his freshman year and knows that he will make a mark here at SIU.

“He already came in as a good player,” Mixon said. “Now you’re starting to see him work his way up to one of those great players, he’ll definitely go down as a legend here.”

You can see Davis and Mixon in the final game of the year, Nov. 17 as the Salukis close out the season at North Dakota State with kickoff set for 2:30 p.m.