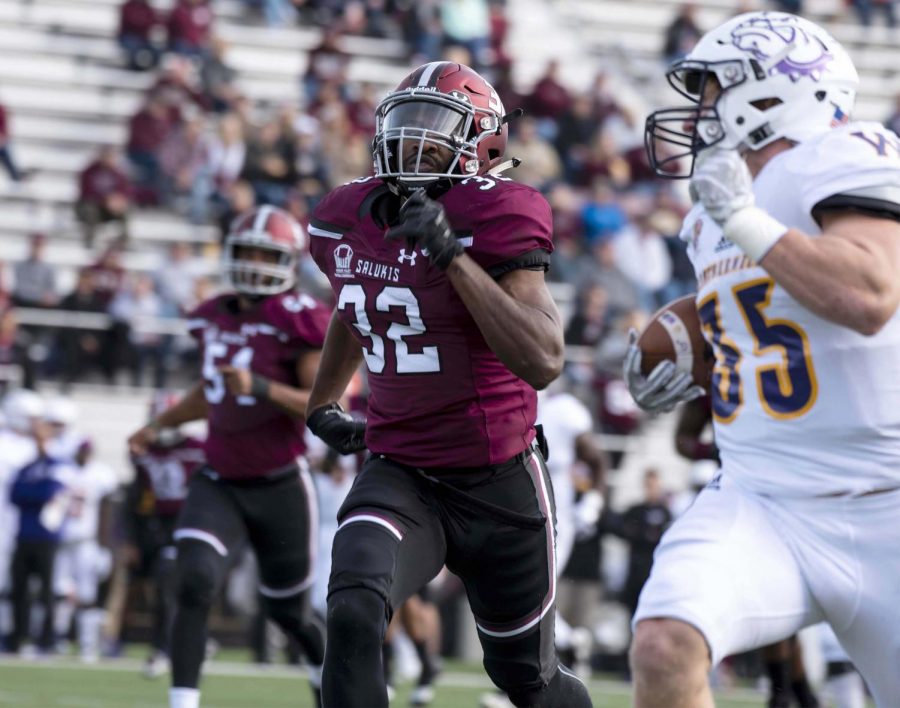 Senior safety, Joe Patterson, of Chicago, runs along side Leatherneck's running back, Larry Harleston, of Racine, Wis.,Saturday, Nov. 3, 2018, during the Salukis' 34-31 loss against Western Illinois University at the Saluki Stadium. (Allie Tiller | @allietiller_de)

“That’s a good football team,” Head coach Nick Hill said. “I think that they’ll be in the playoffs.”

Southern has won eight straight games against the Leathernecks dating back to 2002..

An interception by junior safety Jeremy Chinn, who started at cornerback this game, gave the ball back to the Salukis after a fumble by junior running back DJ Davis with 12:36 remaining in the opening quarter.

Chinn later exited the game due to injury, finishing with eight tackles and one interception.

On a nine-play, 80-yard drive with a 32 yard pass to senior wide receiver Raphael Leonard, Davis ran it in to put the Dawgs on top 7-0 with 6:13 remaining in the first quarter.

Leonard finished with six receptions for 97 yards and one touchdown.

“I ran a fade route, when DeSomer threw the ball,” Leonard said. “[The defender] bumped into me and he failed and I happened to stay in bounds.”

After a 40-yard rush by junior running back Max Norris, the Leathernecks punched it in from the one-yard line tying the score up at 7-7.

With a fumble recovery by the Leathernecks in the second quarter, a 14-yard pass resulted in a touchdown giving them their first lead 14-7.

Southern answered right back with a field goal, only to follow up with a 20-yard touchdown pass from Desomer to freshman wide receiver Je’Quan Brown, jumping ahead 17-14.

After a 47-yard pass by senior quarterback Sean McGuire of the Leathernecks, the SIU defense kept them from scoring to maintain their lead 17-14.

Southern extended their lead on a 12-play, 98-yard drive including a 26-yard pass to sophomore wide receiver Landon Lenoir making it 24-14 with 5:42 left in the third quarter.

McGuire turned it over for an interception to sophomore defensive end Anthony Knighton, marking his first career interception.

After intentional grounding on DeSomer setting up a 3rd and 14, he connected with Leonard for a 30-yard, touchdown pass, pushing the Dawgs lead out to 31-14.

DeSomer finished with a career high 208 passing yards with 14 completions.

WIU ended the third quarter on the SIU 22-yard line with Southern leading 31-14.

“They didn’t have too many big plays,” Chinn said. “But the ones they did have were crucial late in the game when it matters.”

After converting on a 4th and five the Leathernecks ran it in for a touchdown slimming the SIU lead to 31-24 with 10:50 left.

In Southern’s next possession, they gave up 60 yards in penalties in the same drive, allowing Western to score another touchdown leveling the score at 31 each.

The Leathernecks were able to convert a 33-yard field goal to complete a 20-point swing and win the game 34-31.

The Salukis (2-7, MVFC 1-5) will be back in action next Saturday, at Saluki Stadium for senior night against South Dakota State with kickoff set for 1 p.m.

“We’ve got two more down the stretch,” Hill said  “I feel just as confident with our guys going out there to compete next week.”