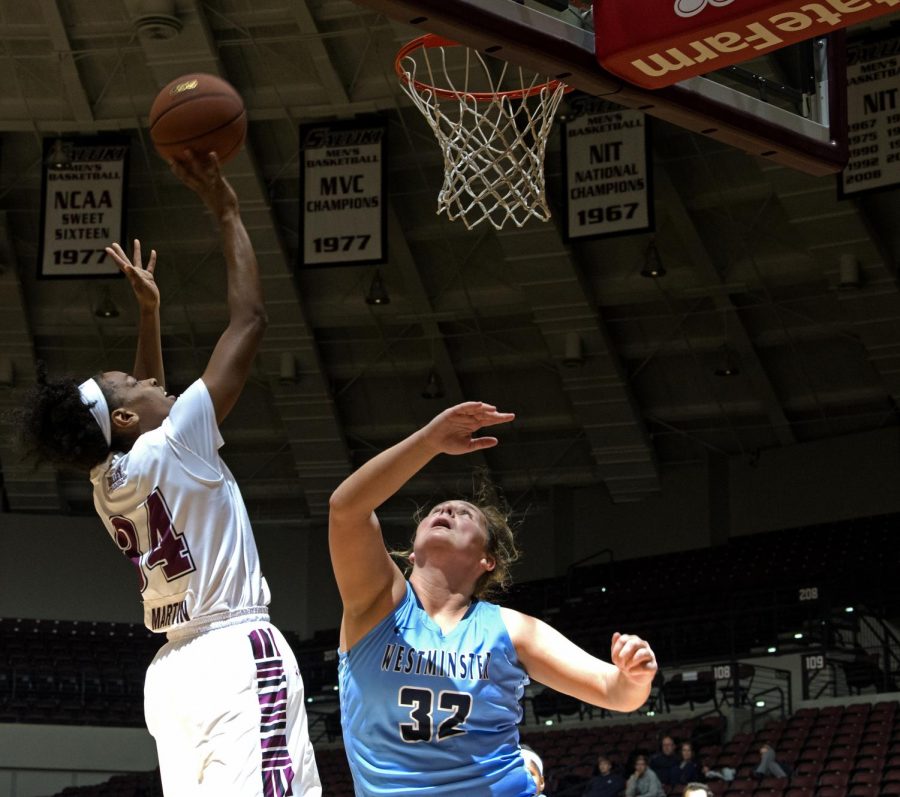 SIU women’s basketball defeated Westminster 118-38 in their final exhibition game of the year.

“We wanted to set the tone defensively and stay after it,” head coach Cindy Stein said. “We wanted to run the floor.”

The Saluki women are returning four of their five starters from last year, including All-MVC selection junior forward Nicole Martin.

The Dawgs were picked to finish fourth in the Missouri Valley Conference in the preseason poll.

Westminster took a small lead with just over seven minutes remaining in the first quarter making it 4-2.

Sophomore guard Mackenzie Silvey answered the lead by Westminster with a three-pointer putting the Dawgs ahead 5-4.

McCallister converted her second field goal of the game putting Southern ahead 11-4.

With 4:22 remaining in the first quarter Martin recorded her second block of the game which led to a three-pointer by Silvey pushing the Saluki lead to 17-4.

Westminster scored their sixth point of the game after SIU went on a 15-0 run making the score 19-6 with 2:39 left in the first quarter.

After Westminster went out to an early 4-2 lead in the first quarter the Saluki defense forced 10 turnovers to end the quarter with a 32-8 lead.

After a block by senior center Ashley Hummel, junior guard Kristen Nelson made a three point shot early in the second quarter extending the lead to 38-8.

On an assist from junior guard Brittney Patrick, Martin scored on a layup and made the free throw after the foul extending the Southern lead to 45-13.

Martin finished with three blocks, three steals and ten points in the game.

After a free throw by sophomore forward Rachel Pudlowski, SIU led 50-15 with 2:39 remaining in the half.

The Southern defense forced seven more turnovers in the second quarter as they went into the locker room with a 56-20 lead.

At halftime Silvey lead all of the Salukis in points with ten and Martin led in blocks with three.

After Martin missed both of her free throws sophomore forward Abby Brockmeyer got the offensive rebound and scored  to put SIU ahead 63-20.

At the media timeout in the third quarter the Dawgs lead 73-28 with 4:51 left in the quarter.

After a steal by Nelson she made the layup putting Southern ahead 79-28 with 2:39 left in the third quarter.

Hummel recorded her first points of the game on an assist by Pudlowski making the lead 83-28 with less than two minutes remaining in the third quarter.

The Saluki defense held the Blue Jays to nine points in the third quarter after nine more turnovers from Westminster and lead 86-29 after three.

A three pointer and a layup by Pudlowski put SIU up 97-31 with 7:05 remaining in the fourth quarter.

With a layup by freshman guard Caitlin Link, the Dawgs pushed ahead 101-33 with 5:27 left in the game.

Link finished with the team lead in points with 19.

“Compared to last week, I guess I was more comfortable,” Link said. “That was my first game last week, knowing what I did wrong, that I needed to be more aggressive with the ball.”

The Saluki defense forced 35 turnovers on the Blue Jays and had 25 steals.

“Defense is really important,” Link said. “That’s why we came out tonight with the idea that defense is first.”

Nelson dribbled out the rest of the clock as the Dawgs finished the preseason with a win over Westminster 118-38.

“We focused on staying locked in this year,our whole motto is grit and grind,” Silvey said.

The Salukis will be in action Friday, Nov. 9 for their first regular season game at the University of Tennessee Martin with tip off set for 6 p.m.

“UT Martin is always good and they’ve always had a great shooting team,” Stein said. “They’ll throw different wrinkles at you defensively, usually a team that can score in a lot of different ways.”