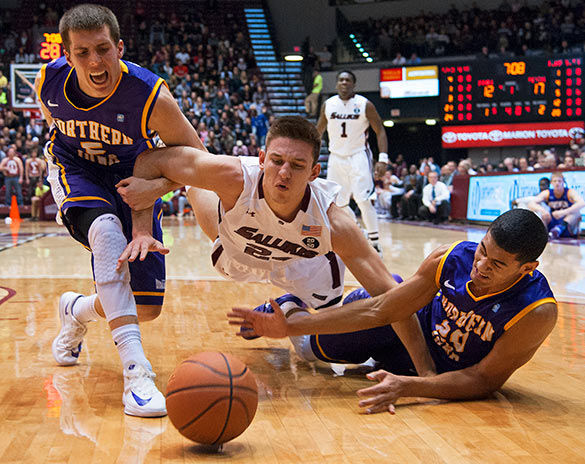 The Salukis pulled together a strong start and an even better finish to earn their first home win of the season.

The University of Northern Iowa (9-8, 3-2) came into SIU Arena third in the Missouri Valley Conference looking to grab a crucial road win over SIU (6-12, 2-3) but fell short because of a late-game shot by the Salukis to go down 68-66.

Senior guard Desmar Jackson was the key factor in why the Panthers fell short. Jackson had the game-winning floater with six seconds left and a block on the defensive end. He finished with 19 points and 11 rebounds for another double-double. He added four assists, three blocks and a steal as well.

Jackson said after his shot went in, he could not give up on the play. He said he wanted to get back to help his teammates.

“The game wasn’t over, I knew I had to sprint back,” Jackson said.

“He can play defense, he just doesn’t want anybody to know that he can,” Hinson said.

Jackson walked into the press conference with two butterfly stitches on the edge of his right eye.

Jackson said every conference game is going to be a war.

“Playing in the Valley, it’s always going to be physical,” Jackson said.

The Salukis started and ended the first half on 6-0 runs. Everything in between those runs was not how SIU wanted to play.

The Salukis were 9-of-28 from the field and only had one 3-pointer. UNI hit four 3-pointers with two coming from sophomore guard Matt Bohannon who added two more in the second half to finish with 12 points in the game.

Panther junior forward Seth Tuttle had 13 points in the first-half to lead both teams.

SIU fell behind late in the first half. The Panthers went on a 13-3 run until two minutes remained in the half. The Salukis scored the last six points of the half to cut the UNI lead to 36-25 at halftime.

The second half was a different story for the Salukis.

SIU ended the game on a 16-2 and held the Panthers without a basket for the final 4:49 of the game.

Sophomore guard Anthony Beane said the team’s communication was better and everyone did what they needed to do to pull out the win.

“I thought it was really good how we stuck together, we were talking” Beane said. “Everybody was alert on defense.”

The shooting of the Salukis in the second half was vital to their comeback. SIU hit four of five 3-pointers and converted 9 of 10 free throws in the final half.

Hinson said his team was able to keep the Panthers from scoring late in the game as well as put points on the board.

“We got to a point where we were able to get two or three stops in a row and we were converting on the other end,” Hinson said. “Which made a huge difference.”

Two freshmen played quality minutes for the Salukis in the win. Tyler Smithpeters and Sean O’Brien made contributions on both sides of the court.

Hinson said O’Brien could grow into a special player.

“I’ve said this all along and I’ll stick with it,” Hinson said. “I think Sean O’Brien has a chance to be an all-league type player before he graduates from SIU.”

The Salukis will leave the comfort of SIU Arena for a battle with the Bradley University Braves Friday.

Beane said this win is great but they cannot get to hung-up on it.

“It gives us more confidence. We just have to stay humble and got to keep working hard and listening to the coaches,” Beane said. “We can’t get too high or too low, we just got to stay ready and stay prepared.”