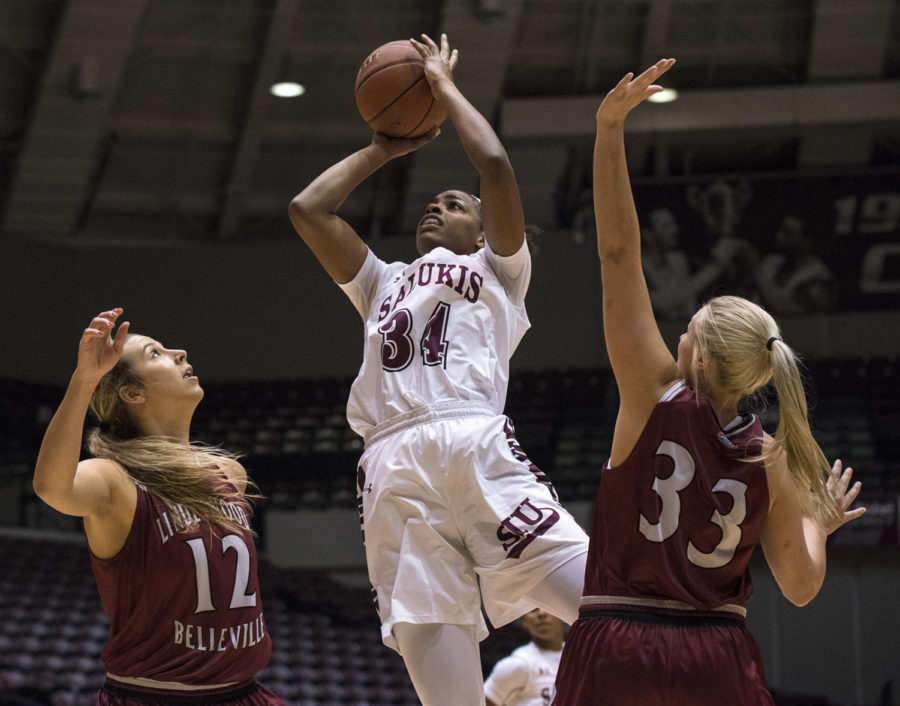 SIU Women’s Basketball star Nicole Martin will be taking the court this season with another Saluki star who happens to share her last name.

Last year, both sisters dominated in their individual sports, but this year they will share the same court.

The Martin sisters, who hail from Jefferson City, Missouri, come from a large, close knit family.

“There’s nine of us,” Kezia said. “We have five sisters and two brothers.”

The Martin parents were both collegiate athletes at Lincoln University.

Kezia, who majors in behavior analysis, is a graduate student at SIU and will be playing as a fifth year senior.

While Kezia is new to the basketball team, she is not a stranger to Saluki athletics.

Last year, the grad student wrapped up her three-year run with the SIU track and field team as a jumper.

During her three years on the track team, Kezia was a three-time MVC champion, a two-time All-MVC athlete and an MVC Field Athlete of the Week.

She started track and field when she was younger, but also played basketball throughout high school as well.

During high school, she won the state championship in triple jump, was voted onto the all-district team in basketball and received the Athlete of the Year Award her senior year.

While she eventually went to college for track, Kezia said her love and enjoyment of basketball far outweighed that of track and field.

“I ran track and played basketball throughout high school,” Kezia said. “I was better at track, but I enjoyed playing basketball more. I got more offers in track so I decided to stay with it.”

Despite not having played the game of basketball in four years, Kezia feels that her track background has helped her to adapt rather quickly to her new workouts and teammates.

“Basketball is a different type of conditioning, but I think track helped me to adjust quickly,” Kezia said. “Track exposed me to a lot of people, so I knew how to connect with my new team.”

She later said the acceptance and kindness of her new coaches and teammates were a helpful factor in her transition.

“It has been the smoothest transition for me,” Kezia said. “The coaches and the entire team have been really helpful, accepting, and friendly ever since my arrival.”

Although she could not bring her cleats, Kezia has brought her competitive spirit  and positive attitude into her new sport.

“My main goal is just to be the best cheerleader I can be,” Kezia said. “I also want to come in competitive and knowing that I am going to try my hardest every time I play.”

Kezia’s positive and bubbly personality was also noted by head coach Cindy Stein as a factor that made her the perfect fit for her team.

“She’s just such a good person,” Stein said. “That’s just something we look for. Kezia is a great fit because of her wonderful personality. She is very funny and very good natured.”

Besides her positivity, Nicole feels her sister’s presence on the team this year has pushed her to go harder in practice and become a better player.

“I think that she brings a lot of hard work to the team,” Nicole said. “She is fast and she jumps very high. She makes us all play harder to score because of her good defense.”

In addition to hard work, Stein also sees Kezia as adding championship experience to her roster this year.

“Kezia brings really good championship level experience,” Stein said. “She’s an elite athlete who is the best in her field. The things she did well in track, we can utilize in basketball.”

Nicole, who is a junior studying exercise science, will be playing for her third year in a Saluki basketball uniform.

She has been deemed one of the stars of SIU women’s basketball and has improved her game, winning more awards each year.

In her freshman year, she started in 16 games, averaged 7.1 points and was voted onto the MVC All-Freshman team.

She went on to average 12.0 points, start 23 games, win MVC Player of the Week and become an All-MVC First Team member in just her second year in uniform.

The now junior, said her sophomore honors helped her come into her junior year confident, but also pressured her.

“I was happy because it showed that my hard work had paid off,” Nicole said. “I was nervous about the expectations for this year, but I realized that the game is the same.”

The accolades Nicole has earned have not come without a fair share of hard work.

Both Stein and Kezia described her as someone who puts in the extra time to improve.

“She’s a young lady that is always in the gym working on her game,” Stein said. “She works very hard. When you have that type of work ethic, you are going to be successful.”

Kezia said her sister works hard off and on the court.

“She works hard,” Kezia said. “She does a lot off the court to better her game. She expects the best of herself and that drives her. She wants to be the best and puts in the work to do it.”

While others credited Nicole’s hard work for the success she’s had, the junior said her family and faith are the keys to her success.

“I would not have had this success without my family giving me advice, love and support,” Nicole said. “I also would credit God. I couldn’t have gotten this far without him.”

Before her career as a Saluki, Nicole grew up playing various sports including basketball.

She said her mother, who played basketball collegiately, was one of her first coaches in the sport and her siblings were her first competitors.

“Our whole family would go to the YMCA and play,” Nicole said. “My mom coached me a lot when we went. When we played no one ever went easy and it was always competitive.”

While Nicole has had an immense amount of success in the sport, basketball was not her first choice in sports growing up.

“I didn’t like basketball at first,” Nicole said. “I wanted to go to school for soccer, but I had really bad allergies so I wasn’t able to keep playing.”

Quitting soccer her freshman year of high school, the younger Martin sister committed herself fully to the game of basketball.

During her high school career, she averaged 16 points and seven rebounds per game, was a two-time All-Jefferson County Conference and All-Area honoree and was selected for the All-Central District team.

The sisters are happy to share the court and feel that Kezia being added to the roster has made them closer and given them a chance to spend more time with one another.

Nicole went on to say she is now able to tell her older sister what to do during practice since she has seniority on the court.

“It’s just great to see how the tables have turned,” Nicole said. “I get to show her how it is to be on the opposite end of the spectrum, but it’s nothing too serious.”

You can see the Martin sisters take the court next Friday in the SIU Arena for their second exhibition game of the season against Westminster College. Tip-off is set for 6 pm.