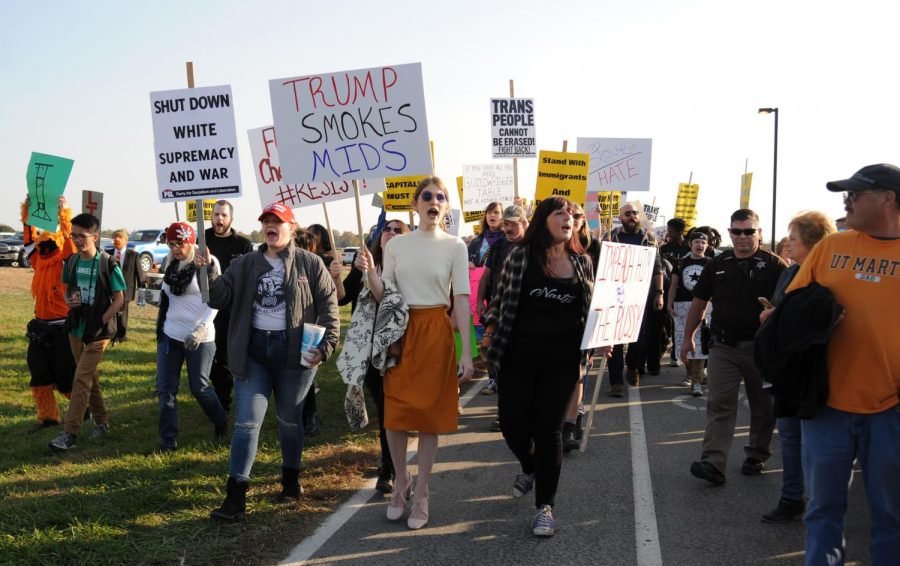 Protesters against President Donald Trump arrived at his campaign rally on Saturday at 1:30 p.m.

One of the first demonstrators to show up and begin protesting was Chip Loghry, a resident of Marion, Illinois.

“I disagree with what Trump stands for,” Loghry said. “I support marginalized communities and their rights within southern Illinois.”

Another protestor, Aimee Kolbeck, carried a transgender pride flag that said: “this is not a false flag.”

Kolbeck said the memo released earlier this week wanting to define gender explicitly by what genitals someone had at birth would change the lives of a lot of people dramatically.

“It’s a hateful memo,” Kolbeck said. “I don’t think it is something that should happen in our country.”

The designated free speech zone was located in a field away from the main rally. Protestors walked down a muddy slope to access it.

Katie Hinders, communication coordinator for the political chapter of the Democratic Socialists of America, said even though people are lined up for a mile to see Trump, there are people who don’t want him in southern Illinois.

Protesters arrived in groups carrying picket signs that read “stand with immigrants and refugees,” passing thousands of supporters in line to see the rally.

“I am here to be visible and let other people in the community know they are not alone in feeling fearful or isolated and just to show some solidarity,” Will Richards, a protester, said.

Richards said most transgender people are concerned with a Trump proposal to redefine gender.

“I am very concerned about what that means about our civil rights in terms about being able to go to our jobs or access medical care without being discriminated against,” Richards said.

“I also feel really encouraged by the response that we have gotten from the greater ally community, so yeah concerned but also encouraged,” Richards said.

The protest had an SIU presence with Saluki Rainbow Network, students, professors and other registered student organizations participating.

Tomas Cortez, a Latino student studying cinematography, was at the protest holding a Mexican flag.

“A lot of students have been affected by the White House administration and should be able to voice our concerns on his policies and rhetoric that he spreads,” Cortez said.

Emily Haymans, a woman wearing a handmaid costume at the demonstration, said she wore the costume to stand in solidarity with other feminists and women’s rights activists.

“Right now, more than any other time I have been alive, I feel women’s rights are being threatened,” Haymans said.

Haymans said she attended the demonstration to show Trump that many Americans do not approve of his character or what he is doing as president of the country.

After they had assembled, Nick Smaligo from the Flyover Social Center spoke.

Smaligo said voting cannot solve all of the problems in the country, and they need to be preparing themselves as a community.

To help the community, there were volunteers at the event that were there to teach individuals how to administer a life-saving drug after opioid overdose, Smaligo said.

Smaligo said anyone interested in these trainings should gather and they would walk down the line of Trump supporters and conduct trainings with them as well.

The protestors dispersed after Air Force One touched down in Southern Illinois Airport.

Staff reporter Farrah Blaydes can be reached at [email protected] or on Twitter at @Farrah_Blaydes.

Staff reporter Kallie Cox can be reached at [email protected] or on Twitter at @KallieC45439038.