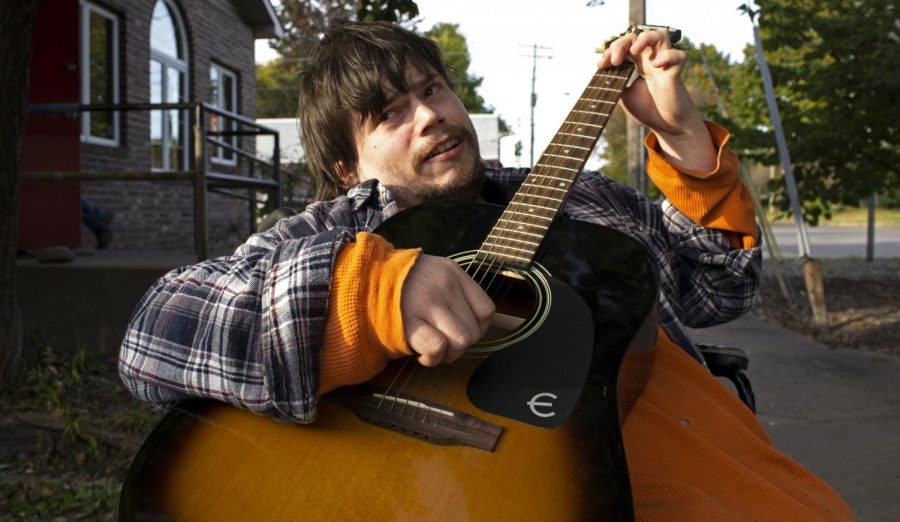 Joey Odum, 29, was born with cerebral palsy. He’s been playing the guitar for the past 26 years, starting at the age of three.

Odum said he’s been playing in the area, professionally, since he was 15.

“I’ve had a lot of different lineups, but the current band, started in 2013 as a recreation of what I really wanted to do because I was in the middle of a horrible record deal,” Odum said. “They put me with a band who wasn’t up to par with what I wanted to do.”

Odum said starting a new band was a way to get back to the roots of what he was doing.

“It was originally created by myself. The band included Kyle Yardley on drums and Dale Bruce on bass,” Odum said. “Over the years, a lot of people have filtered in and out of the lineup.”

Odum said the band doesn’t have a solidified cast.

“It’s just me and and the bass player Mike Alderfer that are the constants, and we get people to fill in, mainly,” Odum said.

Odum said the way the band started was to do his original music the way he wanted it to sound.

“That’s what we have tried to stick to, is doing music that people relate to and that they connect with,” Odum said. “I think we have done pretty well keeping with that statement.”

“Joey is a great guitarist and always surrounds himself with super talented musicians,” Graham said.

Odum said Martin “Big Larry” Albritton, southern Illinois blues legend, and his godfather, was the one who really gave him the courage to really want to pursue music.

Odum said the blues found him. It was the genre that spoke to him on a personal level.

“It’s after you go through so much it just kind of fits you,” Odum said. “So, I’ve just kept doing it.”

Odum said his favorite part about performing is seeing people smile, and being able to communicate to the audience through his music.

“I like to be the person to come in, and through the music, tell people if they’re having a bad day come and see our band, we’ll make you forget about it,” Odum said.

Odum said each show is a connection with the audience that he’s their motivator.

“I inspire them to be happy, and to not let their everyday problems bother them for the time they’re at the concert,” Odum said. “We’re there to have a good time, make friends and come together. I like to be a symbol of peace and happiness for everyone that I play for.”

“He can play a slow, sad song and then follow it up with something that will get you dancing,” Alderfer said.

Curtis Conley, manager of PK’s, said Odum’s band brings a lot of energy to every show they put on.

“Its blues, and PK’s sells,” Conley said. “They’re really professional to work with. At a standpoint as a manager, when there aren’t any problems, people are happy then and we’re making money then I’m alright with that.”

Odum said he doesn’t see cerebral palsy as something much different besides a few people who will question his ability.

“It’s really kind of funny to see the first impression of people when they see me in a wheelchair playing because they don’t really believe what they’re hearing,” Odum said. “I don’t let that get to me so much, but it can be challenging in some ways getting people to take you seriously.”

Odum said however, today it’s rare to get people to take him seriously because many people see him as any other musician.

“It’s really not much different from anything else. I’m a guy that loves to play the blues and I just happen to be in a wheelchair.” Odum said.