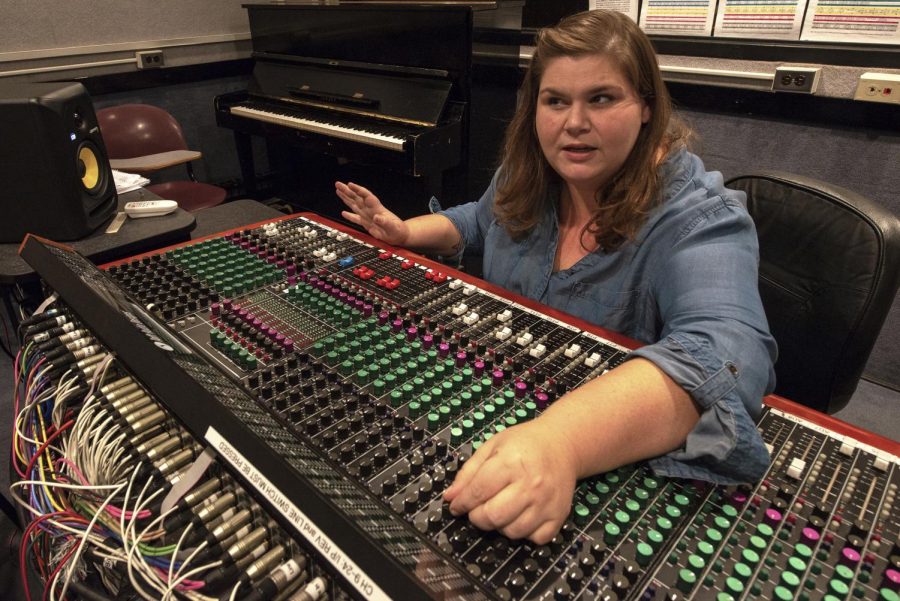 Jennifer Johnson is a former SIU student, a local musician, and a professor whose talent in music and audio production work well throughout her lifestyle.

Mark Stoffel, digital media system specialist, said Johnson is putting her own stamp on her career because she is extremely talented and creative.

Johnson said she came to the university in 2006 to receive her undergraduate degree in music, then returned for her masters in media arts and also her terminal degree, the highest degree awarded in a given field.

“This is where I was focusing more on my chosen media form, which was audio production and a little bit of photography,” Johnson said. “Now, I’m teaching. In between that time and teaching, I had a five year break where I worked, and I was freelance musician.”

Johnson said she was a freelance musician for years.

“I write music, and I have my own band,” Johnson said. “I’ve had several bands that I’ve worked with, and we play around the Midwest region.”

Johnson said teaching helps her learn as much as the students.

“If there’s ever a new thing I want to teach I get to learn it as well,” Johnson said. “We just ordered some new equipment, it’s this digital mixing iPad. I get to take a sound board, and walk around the room. I get to play and learn things like that.”

Dakota Holden, a junior studying Radio, Television and Digital Media, said the first time he and Johnson met was in an audio engineering class when she came in to help students record a cover of a Hall and Oates song.

“I wasn’t in the class at the time, but they asked me to come in and play guitar,” Holden said. “We hit it off. We had a blast recording songs with other students.”

Over the summer, Johnson had a concert at the Varsity Theater with her own original music, Holden said.

“That would’ve been ten songs or so, that were arranged on the spot,” Holden said. “So, she put together this large band, I played pedal steel for it. We as a group arranged these songs and performed them in less than eight minutes each. It was a wild experience.”

Holden said Johnson has made a strong impact on his life.

“Her coming here was an important factor of the opportunities that I have now, and the music that I continue to make,” Holden said.

Everything in music just informs how to work with a band or a group recording, Johnson said. Teaching is the same thing.

“Everybody has roles, and so when we come into the engineering studio we apply the same concept where students work in groups to record musicians,” Johnson said. “They know they’ll have different functions.”

Students will be setting up mics, running the board, working to get the musicians in and filling out documents making sure everything is done the right way, Johnson said.

“Everything works like a team, which is how music works in a lot of ways. It’s team-building,” Johnson said.

Holden said Johnson has proven herself to be one of the most advanced engineers.

“That I know, and it makes every piece of learning entertaining and fulfilling to us students,” Holden said. “She’s my favorite professor here, and there’s no doubt about it.”