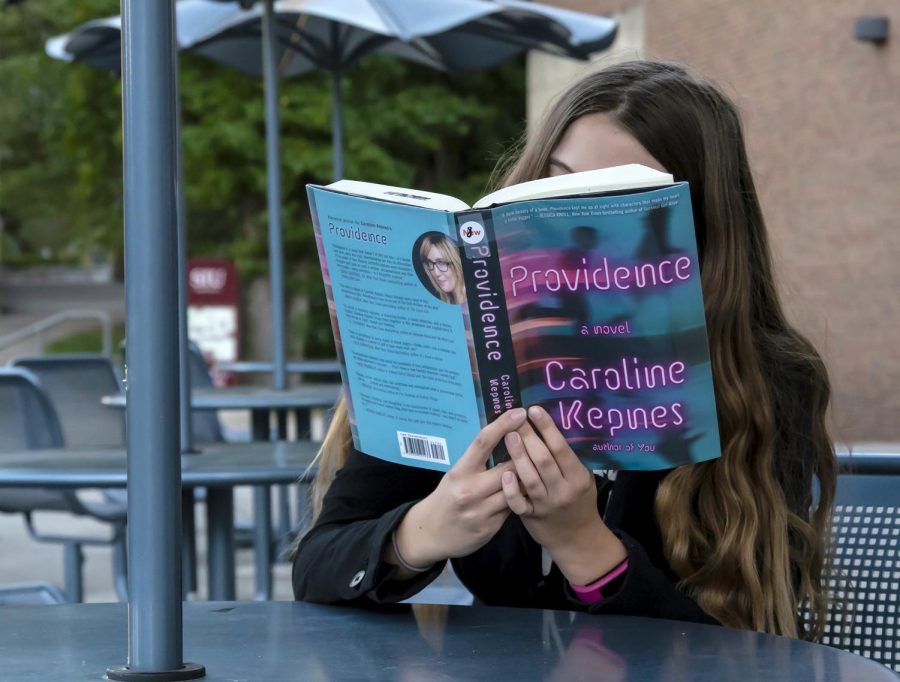 Middle schoolers Jon and Chloe are best friends, until Jon gets kidnapped. Four years later, near the end of senior year, he returns.

He’s different — bigger, stronger, and possessing strange powers that put those around him in danger. Afraid of hurting Chloe, he runs away, trying to find answers about what happened to him in the four years he doesn’t remember.

In Providence, Rhode Island, college students and residents are dropping dead for no apparent reason. Detective Charles “Eggs” DeBenedictus suspects a serial killer might be striking in his town, but everyone else believes the deaths are coincidences.

I picked this book up because of its eye-catching cover and brought it home with me because of the stellar blurbs coating the back cover.

This book was a strange one. While reading it, I didn’t feel like it fit into any particular genre.

I suppose the best way to read this book would be to read it without preconceptions about the genre because otherwise, it won’t live up to expectations.

One of the interesting things about the book was it started off in first-person with middle school-aged protagonists. Not what I expected from an adult thriller.

I found that a little off-putting, although I don’t mind reading books with middle school protagonists, I don’t think it really meshes with any of the potential genres it’s trying to fit into.

My biggest issue with this section is an over-abundance of Chloe.

It starts off with one Jon chapter, in which the author gives a perfect summary of Jon’s character, personality, and emotions and shows his kidnapping. Then four bland Chloe chapters in which nothing really happens besides Chloe missing Jon.

Yes, they were friends and they loved each other. We get it. I don’t understand how the author could so concisely sum up Jon’s character and then follow that up with four chapters in which Chloe shows next to no personality.

This book had so many interesting characters: Jon, being kidnapped and having mysterious powers; Eggs, the detective who will follow his gut at any cost; Lo, Eggs’ wife, a college writing professor who considers her students like family; Florie, cat lover and poet.

And then we have Chloe, who has a nearly nonexistent personality, and conflicting values in friendship. For example, she says she loves Jon but lusts after Jon’s bully in school who was the reason Jon was walking through the woods when he got kidnapped.

Chloe spent the beginning of the book pining after Jon while he’s missing, then pining after him later after he runs away.

We don’t see much of her character before Jon gets kidnapped since that happens in the first chapter, narrated by Jon. We only see her in the aftermath, when her whole world essentially revolves around the fact that Jon is gone.

Also, Jon is supposedly in love with her, which is a big part of the story and the reason he ran away after he got back, but the only thing he said that explains his love for her was she’s “nice.”

I would have liked to see something that gave perspective on why he’s attracted to her. Maybe a flashback to the day they became friends or times she stuck up for him when he was getting picked on.

Instead, we get Jon calling her nice and saying she smells like cookies, and meanwhile she’s obsessing over the kid who bullies him and doesn’t defend Jon at all, at least not that we see.

She’s attracted to a bully because she can “see his sweet side,” like that makes it okay to ignore everything else. It makes her relationship with Jon lose credibility since she supposedly loves him but can’t stand up for him because his bully is hot.

And not only is she attracted to the bully, but he’s also attracted to her. That makes two boys lusting over a girl without any clear reason.

How can someone be so alluring to two characters in the story but not have any personality whatsoever? And it’s not her looks, either, because neither character mentions those. In fact, neither character ever really verbalizes what makes her attractive to them.

The one thing I found interesting about Chloe was her use of art as a coping mechanism, but I also couldn’t stand her character, so when Jon’s mom went on about how Chloe was a terrible person and profiting on the family’s tragedy (Jon’s kidnapping), I didn’t completely disagree with her.

The section devoted to Eggs’ investigation of the mysterious epidemic of young people dying of heart attacks, I enjoyed significantly better.

I liked Eggs’ character. I thought he was written with realistic feelings and motivations, the conflicts he had to deal with were interesting and his dedication to the case was impressive.

Here’s a proposition: what if the whole first part of the book was removed and Eggs and Jon were the main characters? All of the same events and character interactions happen, but no Chloe chapters. Anything useful from Chloe could be incorporated into Jon’s chapters.

Normally, I would never advocate for cutting a female perspective from a book. Representation is something I feel strongly about, and I think all stories benefit from having well-crafted female characters present.

But I have no idea what went wrong with Chloe. The other female characters in the book are fine, like Lo. She’s very family-centered, which makes her easy to identify with.

Chloe feels like a partially-developed side character who somehow became a narrator.

Despite the negative things I’ve said in this review, I did mildly enjoy the book. I would have rated it at least a B if it hadn’t been for my ongoing confusion on why Chloe was a guy magnet when she had nothing that made her particularly likable.

Lesson I learned after reading this: Don’t judge a book by its blurbs.