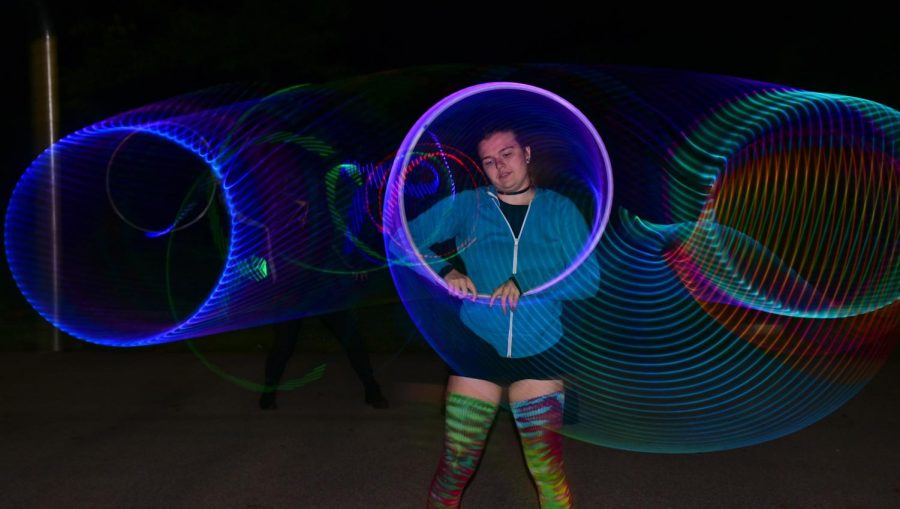 Flow arts is a free-flowing movement with no rules involved, according to Eleanor Lercel, a junior studying automotive technology.

“Everyone has their own flow, per se, so everyone sort of puts their own twist on different moves or tricks,” Lercel said.

With flow arts, you just listen to the music and do whatever you feel like doing, Alyssa Weimer, a junior studying art education, said.

Flow artists often use props when flowing. Different props can include hula hoops, poi, contact staffs, and fans, among other things.

Flow props can be purchased from various sources, and some, like hoops, can be handmade, according to the flow arts group.

“There [are] big companies [that sell props], too, but honestly, I like to get most of mine from small shops,” Lercel said. “You’ll make friends with the shop owners; it’s really personal.”

The group said beginners interested in hooping can purchase inexpensive hoops from Walmart or Dollar Tree to start with.

“I wanted to start and I went and bought a Walmart hoop,” Weimer said. “[I] probably bought two or three of them.”

The combination of movement and manipulation of props makes up flow.

“There’s something called the flow state, and it’s kind of like when you’re dancing or flowing and you really get in the groove,” Lercel said. “For me it’s like I forget about everything, and then I’ll start doing stuff that I didn’t even know I could do, and making up new things.”

“I feel like you just let go of a bunch of insecurities when you’re doing it,” Weimer said.

Lercel said flow arts are a great activity for adults since there aren’t a lot of new things for adults to pick up and learn.

“Flow arts is really fun [because] you’re always growing and always progressing,” Lercel said. “In the beginning it might be really frustrating, but it’s so satisfying to get to the point where you can flow for a long period of time or getting that new trick.”

Weimer said she enjoys flow arts because of the noncompetitive attitudes of flow artists.

“When I was in dance, […] it felt like it was so competitive, and everybody kept trying to get above each other,” Weimer said. “I feel like most hoopers aren’t like that, or just anybody that does flow arts isn’t really like that. We’re all uplifting towards each other.”

The flow group said flow arts are a good way to meet people, whether through attending festivals and meeting other flow artists or talking to people who walk up and ask what they’re doing.

“It’s nice getting people who are just genuinely interested as opposed to guys just coming up like, ‘Oh my god, do a trick for me,’” Mia Lopez-Negrete, a junior studying psychology, said. “When [people ask about] it in a respectful way, it’s really nice, and maybe that’s a person who has just some untapped flow ability.”

Lopez-Negrete said flow props can act as a conversation starter, or flow artists can flow at events if they’d rather not talk to people.

“I’m always really kind of awkward when I go to concerts, [because] I don’t dance, […] it gets me moving and I like that,” Lercel said. “It lets you be by yourself, but not in an awkward way.”

The group said when they become an RSO, they would like to organize field trips to events like concerts, festivals, and flow jams.

“They have flow festivals where you can go and have different workshops for all different kinds of props,” Lercel said. “They have beginner and advanced levels, and you can go and learn different tricks from [flow artists] you’ve seen on Instagram.”

“There’s not really a structure [to them]; you can go up to people if you see them flowing [and ask about tricks],” Lercel said. “It’s like flow artists’ version of a party.”

Weimer said the group is also interested in putting on performances for the public.

Currently, the group is looking for a sponsor so they can get official RSO status. They have been working on a constitution detailing membership and funding.

“We’re not trying to do where you need to pay a fee up front,” Lopez-Negrete said. “It’s not something that [is] expensive to join, it’s supposed to be something more community-based and [the only expense would be] for stuff that we would collectively want to do.”

Lopez-Negrete said the group wants to create a community for flow artists at SIU, and to help incoming freshmen come out of their shells.

“I don’t want them to feel like [the group is] something so strict, like if you’re doing a sports team or doing Greek life,” Lopez-Negrete said. “Those are great things for some people that are really heavily into it, but having something that’s more free and a group of friends, it’s more relaxed.”