Salukis go down in dog fight 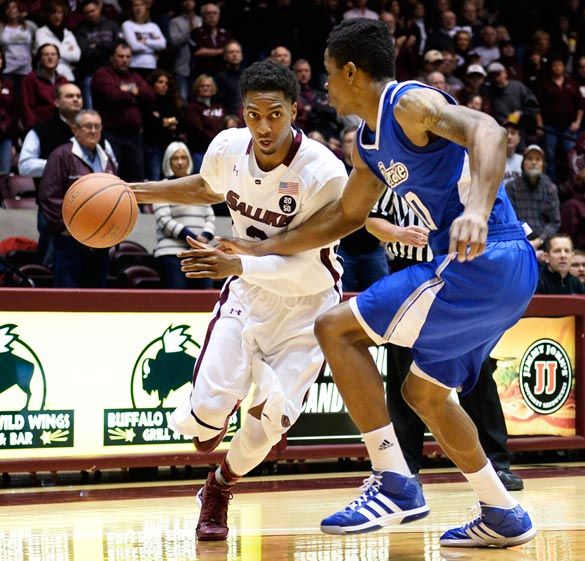 After shooting less than 43 percent from the free-throw line, the Salukis have nowhere to place the blame except on themselves.

SIU struggled from the free-throw line as well as the field the entire game. The Salukis were 7-22 from the line before hitting five of their last six attempts.

The Salukis had the ball with 9.5 seconds left and were down 57-54. Hinson said the plan was to dribble-drive and dish the ball to the 3-point line. Junior guard Dawson Verhines found the ball in his hands and put up a shot, but the ball rimmed out to give SIU its second loss in row.

“When you’re ready to play in a basketball game, when you have a sense of urgency, when you’re aggressive, an aggressive mindset, you make free throws,” Hinson said. “I just believe that.”

Senior guard Desmar Jackson finished with 15 points on 4-15 shooting from the field but he was 7-9 from the free-throw line.

Drake senior Aaron Hawley had 19 points with five coming from behind the 3-point line, but none of them were as crucial as his final attempt of the night. SIU held Drake scoreless for almost eight minutes but Hawley hit a 3-pointer with 40 seconds left to put the Bulldogs in the passengers seat.

Hinson said freshman big man Bola Olaniyan would get the start against the Bears of Missouri State University on Saturday. Olaniyan grabbed seven rebounds in 18 minutes of work in the second half.

Olaniyan said the team has to keep looking forward in order to get better.

“We just got to regroup and think about the next game and how we’re going to win the game,” he said.

Sitting in last place in the Valley is not the best place to be come March. Freshman Sean O’Brien said his team does not want to play on the opening night of the MVC Tournament.

“I think we’re, what, tied for last, right? We really gotta get it going,” O’Brien said. “We don’t want to play on Thursday night.”

The Salukis play Saturday on the road at Missouri State. The Bears will be without sophomore stud Marcus Marshall, who tore his meniscus earlier this month.