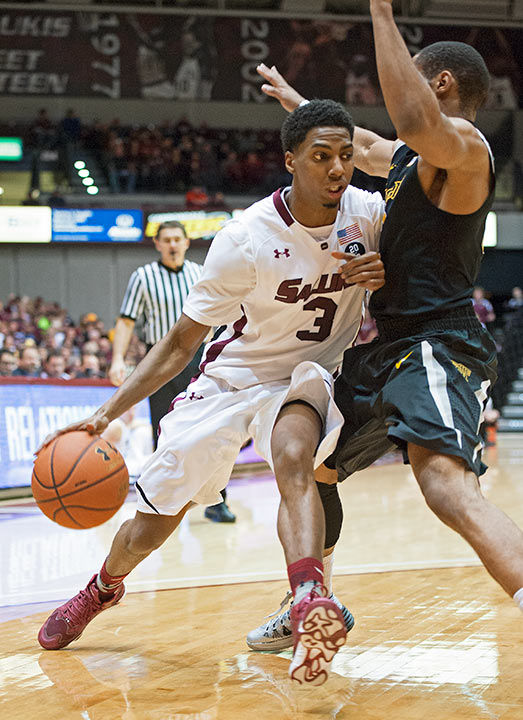 The Shockers played as advertised in tonight’s 82-67 win over the Salukis and despite having three players in double figures, SIU couldn’t dig its way out in the second-half.

Wichita State University (14-0) entered Carbondale as the number seven team in the AP Top 25 poll and with the Shockers having several future NBA prospects, the Salukis (4-10) couldn’t string together enough baskets for the upset.

In the opening minutes of the first half, SIU looked poised and ready for the task at hand.

Freshman forward Sean O’Brien put the Salukis in the scoring column with an early 3-pointer and freshman guard Marcus Fillyaw added another just one minute later.

SIU was able to maintain momentum but just after the midway point of the first half, the Shockers grabbed their first double-digit lead and never looked back.

Shocker Coach Gregg Marshall said he was concerned for his team to come out of SIU with a win after the way the Salukis rallied around Coach Barry Hinson.

“We were honestly afraid that this team would pull out something special and a great effort,” Marshall said. “I think they did, especially in the second half.”

The Salukis pulled the upset last season against the Shockers and Wichita State’s Cleanthony Early said last season’s game did cross his mind.

“That’s all I thought about the entire time, just what happened after the game,” Early said. “That’s just motivation.”

O’Brien along with senior guard Desmar Jackson led the Salukis in scoring with 19 while sophomore guard Jalen Pendleton added 16 off of the bench.

O’Brien said his hot shooting helped him get to the basket later in the game.

“Making the first one always helps, then after that they had to close out a little bit harder,” O’Brien said. “It was a little bit easier to get to the rim.”

MVC Pre-season Player of the Year Cleanthony Early scored 23 points and hauled in five rebounds for the Shockers in the win. Aside from Early, sophomore guard Fred VanVleet had 17 points, seven assists and no turnovers.

The Salukis were led in scoring by senior guard Desmar Jackson and freshman forward Sean O’Brien who each tallied 19 in the loss. Sophomore guard Jalen Pendleton continued his solid play scoring 16 points in 26 minutes.

Jackson was perfect from the free-throw line hitting all seven attempts, and said it was normal for him to drive the basket against the post players.

“I was just playing my game out there, that’s it,” Jackson said.

O’Brien said the tough play in the post is something his team will be seeing all season.

An emotional Hinson was the final person to enter the press conference after the game.

“I got on these guys pretty hard after the Murray State game and I literally pointed the finger at those guys,” Hinson said. “Tonight, I don’t mind telling you I’m going to point the finger at me.”

It’s been a difficult week for the Hinson family after the death of Coach Hinson’s son-in-law, Niles Thomason, on Christmas morning.

Hinson said he spoke with his daughter and grandson last night which jarred him for whatever reason. Hinson said there is one thing that bothers him the most.

“I’m a basketball coach and I’m a father, and we fix things,” Hinson said. “I can’t fix this and I want to.”

Hinson said he wanted to thank the Carbondale community for their outpouring of love and support for his family during this past week. Hinson told his wife this morning one thing about the Carbondale area.

“There’s a reason I moved to this place,” Hinson said. “Every time I go to the mailbox, it just confirms what I thought all along about this community.”

Tyler Dixon can be reached at [email protected] or tdixon_de on Twitter.