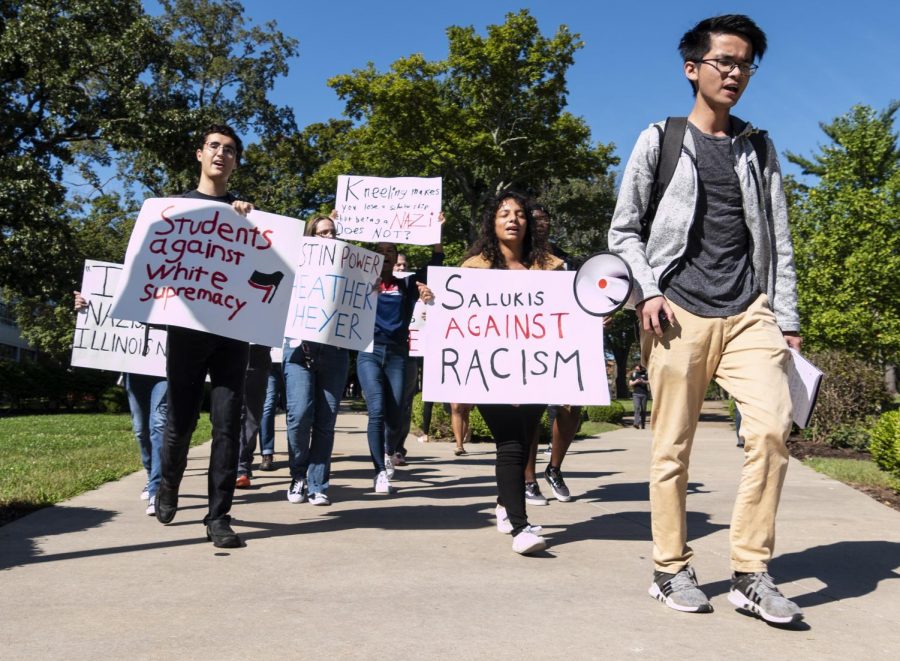 Students and community members gathered to rally against administration handling of neo-Nazi student accusations. The rally against racism took place outside of Faner Hall on Friday.

The flier about the event that was passed around by the campus Young Democratic Socialists of America, said the rally would be to send the administration a message that accepting neo-Nazis on campus while threatening kneeling cheerleaders, is unacceptable.

Three SIU cheerleaders knelt during the national anthem of various SIU athletic events in protest of racial injustices in 2017.

In September 2018, a flier circulated around social media saying an SIU student was a neo-Nazi.

While some on social media called on SIU to revoke the student’s financial aid, Lori Stettler, vice chancellor of student affairs, said the university would not do so.

“As a public institution, we cannot and do not ask about political or social views when admitting students or awarding any type of financial aid. Doing so could lead to perceptions of bias and illegal discrimination,” Stettler said.

Emily Caminiti, graduate student and president of the YDSA, said she helped plan the event to stand in solidarity with minority students.

“We did this in response to the fact that there was a Nazi on campus and we thought that it would threaten and make the students of color and LGBTQ students feel unsafe,” Caminiti said. “So we decided to show them solidarity and that we support them.”

Caminiti said she wanted to understand why the university threatened the scholarship of the cheerleaders who knelt, but defended the free speech rights for an accused Nazi.

Rae Goldsmith, spokesperson for the university issued the following statement to the Daily Egyptian after the rally:

“While the kneeling and white supremacist instances are very different in multiple ways, especially in terms of the messages students were conveying, the university has been very consistent in its protections of free speech for all students.”

(See more: Chancellor Montemagno responds to complaints about SIU student accused of being a nazi)

Goldsmith said the proposed addition to the athletics student code regarding activism was not implemented because many perceived it to violate free speech rights, although that was not the intent.

“Again, the university has been very consistent in protecting the free speech rights of students,” Goldsmith said.

Alaysia Brandy, a junior studying biological sciences at the university, and one of the cheerleaders who knelt during football games in 2017, attended and spoke at the event.

“The reason why we are here is the way they treated the young man who was outed as a neo-Nazi,” Brandy said.

“That is all I am asking is for us to stop being murdered and for there to be punishment, when such activities are done by the police officers,” Brandy said. “But the neo-Nazis say ‘get ready for combat’ and target people of color and people of certain religions.”

Brandy and others during the rally said they were upset the university administration only sent out the email explaining their actions to some of the students.

Cheyenne Martinez, a freshman with an exploratory major, said she was at the rally because SIU went about handling a situation that involved all students, but only a few were notified about it.

“I feel like I go here and I am part of USG as an undergraduate student and I am not being notified about the issues and problems that are going on at this school.” Martinez said.

Bianca Hazen, a community member, said she was at the rally to voice her displeasure of how the university handled the situation on the campus she grew up around.

Hazen said she did not see anyone from the administration at the rally.

Another community member, Trisha Morelli, brought her daughter with her to the rally because she said it is her daughter’s future world.

“Hate does not belong on a college campus, and we all need to strive to be better than that,” Morelli said. “This is not a world for white-privileged males anymore and everyone else should be allowed to have a say in the things that they believe in.”

“Eric” Zhi Hao Tsang, was the first to speak at the rally. He said he was at the rally to express his displeasure with the way the administration handled the kneeling protest, compared to the neo-Nazi organizer on campus.

“The rules are made by humans and it is time for us to start thinking about what can we change in order to create a safe space for all students,” Tsang said.