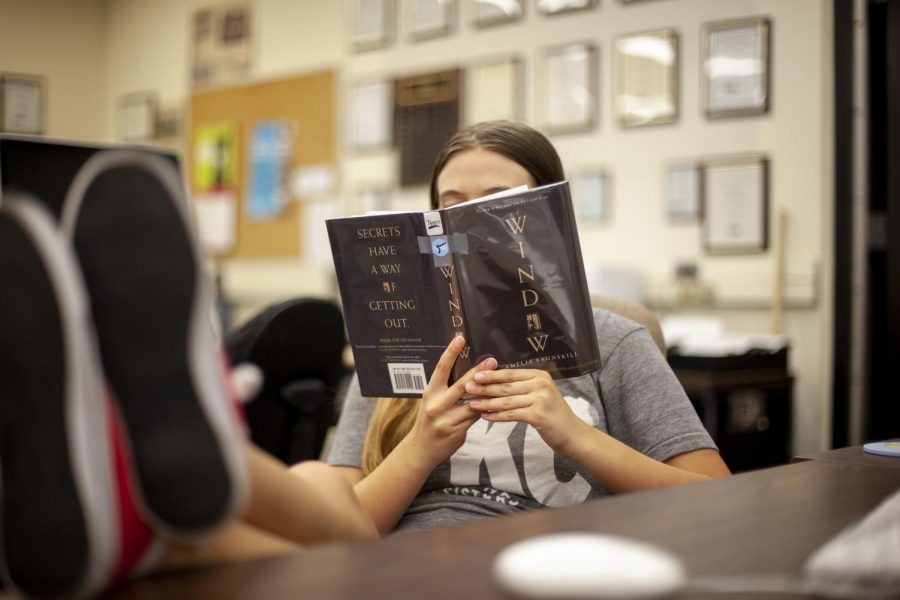 Jess’s twin sister Anna died after falling from her window. Everyone thinks Anna’s death was accidental except Jess.

Jess knows Anna was going to meet a boy.

Can be found at Carbondale Public Library and at Barnes and Noble.

This is Brunskill’s debut novel, a compelling book that drew me in from the start.

Jess learns of her sister’s death in the first chapter; the author doesn’t waste time with a lengthy prologue or character introduction.

I appreciate that because a lot of authors feel the need to load a bunch of backstory in the first couple of chapters, which is often unnecessary, particularly when it’s done in suspense novels.

The chapters are all six pages or less, so it doesn’t get monotonous.

This book is definitely Jess’s story. It’s interesting to watch her character develop throughout the book. She steps out of her comfort zone to find out what happened to Anna, going to places like a bar or a basketball game.

Jess also exhibited signs of potentially being on the autism spectrum; she doesn’t like being physically touched and often struggles with interactions and reading people, but it’s never explicitly stated whether she is or isn’t.

The author left that up to the reader to determine; it makes it easier for more readers to identify with Jess and see themselves in her.

One of the things I loved about the book was although Brunskill didn’t go into much depth about Anna as a character, she did preface many of the chapters with snippets of Anna’s thoughts before she died.

Even though she’s dead, Anna still “has input” in the telling of her story, and I enjoyed that. In most of the mysteries I read, the victim is essentially a body with a backstory, not a character.

That makes sense since they’re dead, but having Anna’s thoughts presented makes her as much of a character as Jess and gives a different perspective on Jess’s investigation.

The reader is figuring out what happened to Anna piece by piece along with Jess, but Anna’s thoughts give a little hint of the next part of the puzzle that readers get to know but Jess doesn’t.

Sometimes I got a little bored with the pace, but then Anna’s thoughts would add something new and I’d be drawn back in immediately.

I also liked how the thoughts weren’t explained (i.e., they came from a diary or a letter), but instead left up to the reader to interpret. In the very last one, Anna says she knows the listener is probably asleep and she’ll tell them everything in the morning.

Many of the thoughts, however, sound like things Anna wouldn’t be saying aloud, so I believe they’re things she wanted to tell Jess but never got to say.

Jess spends a lot of time focusing on one suspect, who she heard had a “special relationship” with Anna.

The idea of a romantic relationship between Anna and her teacher needed something else; either he needed to be suspected of murdering her (more suspenseful) or the relationship should have actually existed (more interesting).

Instead, we have a bunch of chapters where Jess watches him through his window and debates the ethics of his relationship with Anna, which probably would have had more meaning had it actually been based in fact.

These chapters are interspersed with ones where Jess actually does find more information (intriguing!) and has a romantic interest in a guy who used to like her sister (less intriguing and a little creepy!)

Romantic subplots tend to annoy me if I’m not expecting them, and this one was no exception. It did get more interesting when Jess got closer to figuring out what happened, though, since the guy did have a connection to Anna’s death.

The ending of the book was not terribly surprising, mostly because the middle dragged out enough that I had time to think about it more, and also because, as in most mysteries, it isn’t the first person you expect.

The Window was definitely an interesting read; I wouldn’t call it a thriller per se since it wasn’t action-packed or incredibly suspenseful. It reminds me a bit of old film noir from the 1940s; a lone investigator uncovering a mystery, even if that means the pace slows down.