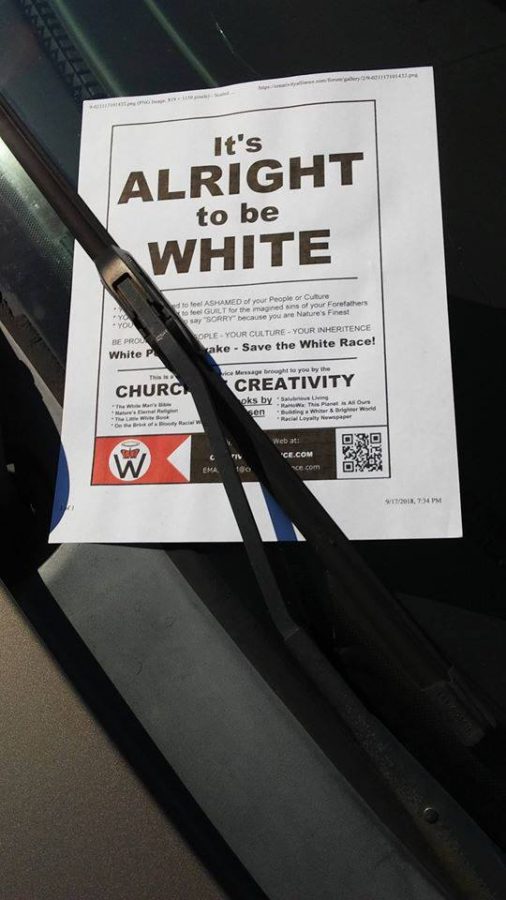 A racist propaganda flier on the windshield of a car at John A. Logan Community College on Tuesday.

On Tuesday, fliers with the heading “It’s alright to be white” were placed on the windshields of vehicles at John A. Logan Community College.

The flier is recruitment propaganda for a white supremacist group known as the Church of Creativity, and has a website address to the Creativity Alliance at the bottom of the poster.

In response to the fliers Steve O’Keefe, the director of college relations for John A. Logan, released a statement in regards to the recruitment propaganda that showed up on campus Tuesday morning on students car windshields.

“John A. Logan College prohibits the dissemination of fliers of any kind on automobile windshields,” O’Keefe said. “Fliers that were placed on a limited number of cars on Tuesday, Sept. 18 were promptly removed by campus police. The fliers from an outside group have no connection to the College.”

The Daily Egyptian asked the Church of Creativity if the fliers were theirs and if they ordered someone to place the fliers.

“Why would the person who put the flier out need to be taking orders?” The Church of Creativity said. “Perhaps the person did it because he (or she) wanted to? It is good to see somebody at least trying to spread pro-white thinking. Have any laws been broken?”

Numerous social media accounts identified the person that placed the fliers as an SIU student, however the Daily Egyptian has not been able to confirm that.

In response to the accusations on Twitter, Lori Stettler, vice chancellor for student affairs, released a statement saying all students share the right to free speech, even speech that expresses views most would condemn.

“All students share the right to free speech, even speech with which we strongly disagree,” Stettler said.

While some on social media called on SIU to revoke the student’s financial aid, Stettler said the university would not do so.

“As a public institution, we cannot and do not ask about political or social views when admitting students or awarding any type of financial aid. Doing so could lead to perceptions of bias and illegal discrimination,” Stettler said.

Stettler said the university encourages all students to comply with the Saluki Creed:

“As a Saluki, I pledge to forward these ideas and ideals: I discourage bigotry and celebrate diversity by striving to learn from differences in people’s ideas and opinions. I will embrace the ideals of freedom of civilized expressions, intellectual inquiry and respect for others.”

In response to the fliers the Carbondale Racial Justice Coalition released the following statement:

“The Racial Justice Coalition wants everyone to know that the days of ignoring hate groups like the neo-Nazi Creativity movement, in order to deprive them of the attention they crave, are over.”

The Church of Creativity, or the Creativity Movement, have been around for decades. One of its leaders, Matthew Hale, graduated from the SIU School of Law, before being refused a law license by the State of Illinois due to his poor character.

In 2005, Hale went to federal prison for encouraging an undercover FBI informant to murder a federal judge.

After the fliers were placed at John A. Logan appeared, new fliers from a group known as the Knights of the Flaming Circle, an anti-fascist group, were found around Carbondale and circulated on social media.

The Knights of the Flaming Circle released a poster containing photos of the accused student and provides contact information for the group, encouraging anyone who has information on the student to contact them.

“We plan on using that information to obstruct [the student’s] ability to engage in white supremacist organizing,” Knights of the Flaming Circle said.

Staff reporter Farrah Blaydes can be reached at fblaydes@dailyegyptian.com or on Twitter at @Farrah_Blaydes.