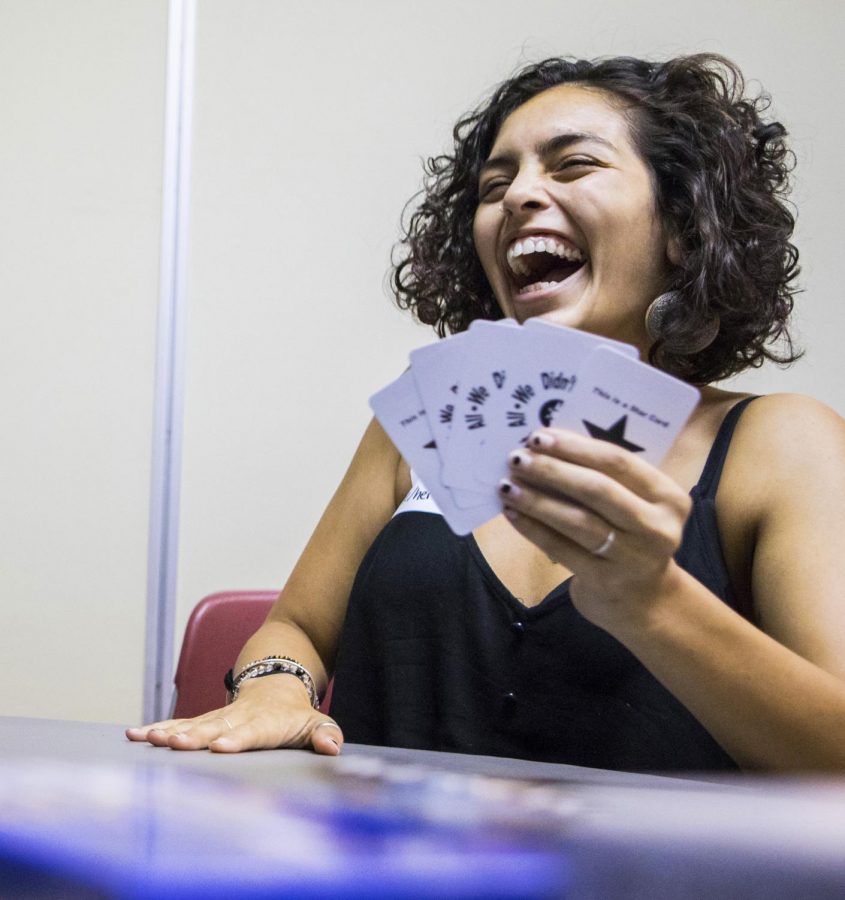 Shayla, a graduate student at SIU, plays a card game Friday, Sept. 14, 2018, after the A.L.I.A.S. RSO meeting at the Student Center. Shayla said she joined the group because it fits in with her lifestyle and sexual identity. (Corrin Hunt | @CorrinlHunt)

“ALIAS is an experience-based and positive reinforcement education support group for those who are interested in risk-aware consensual sexual practices,” Nakkiah Stampfli, a senior studying university studies and president of ALIAS, said.

The group also does presentations on safety, including internet safety, Blackfell said.

“A safe call is a friend that knows that you’re going somewhere to meet someone,” Blackfell said. “You’ll give them details like where you’re going, who you’re meeting… you can snap a picture of [the person’s] driver’s license and […] text it to [your friend].”

Blackfell also said a safe call is a way to check in and make sure everything is okay — if the friend doesn’t hear from you at a certain time, that means they should call you. If you don’t respond, they should send help immediately.

Safe calls are important when meeting someone found on the internet since you don’t actually know the person, Blackfell said.

“Anybody can be anybody on the internet,” Blackfell said. “And unfortunately one of the few resources for people in alternative lifestyles is often the internet.”

ALIAS hopes to provide an in-person resource to people interested in alternative lifestyles in the area, Stampfli said.

“[We want to make] sure that anybody who’s interested has [a] community, community is really your best resource,” SIU student and ALIAS member M said. “It provides safety, in that it teaches you how to do things safely and not hurt yourself or somebody else.”

M said they looked for resources online and found the group that way. This will be their fifth year in ALIAS.

“[I] decided to go to a couple of the meetings and honestly, it was the best thing I could have done,” M said. “I made so many great friends, met so many great people in this community.”

Stampfli said the first couple meetings this semester will focus on icebreakers and team-building to foster community amongst members.

“We are all very unique individuals with very unique academic interests and social interests,” Stampfli said. “Getting to know each other outside of this community and what we have to offer to the rest of the world outside of that is important.”

One of ALIAS’s goals this year is to gain members, Stampfli said.

“We haven’t been able to promote our events thoroughly as I would have liked to and as other officers would have liked to in previous years,” Stampfli said. “Now that we have the opportunity and the platforms [as an RSO], I think membership expansion is a big [goal of ours].”

One of the setbacks for the organization’s attempts to become an RSO was that many members did not want to put down their information to be listed as members of the group, according to Stampfli.

Because of this, ALIAS has special precautions in place to protect members’ privacy.

Members are allowed to go by whatever name they want at meetings, and at the beginning of their Friday meeting, ALIAS officers read the organization’s discretion and membership clauses aloud to attendees.

In order to become members, people must agree to not speak about other members’ affiliation with the group and to not approach them outside of meetings unless the other person specifically states that they are okay with being approached, among other things, Stampfli said.

Members who violate the clauses will be removed from the group, Stampfli said.

Understandably, some members would prefer not to be publicly affiliated with the group, Stampfli said.

“A lot of our members want to keep things more private,” M said. “They may use an alias at ALIAS, but they’re no less members than the ones who are publicly associated with us.”

Membership is open to SIU students, as with all RSOs, but also to members of the greater community, Blackfell said.

Non-students do not get a vote in matters of how the organization is run, but can still attend and participate in meetings and events, Stampfli said.

“Whether [interested people] have no experience in the community at all or they’ve been in the scene for thirty years, they are more than welcome to attend our meetings and get the education and support that they deserve,” Stampfli said.