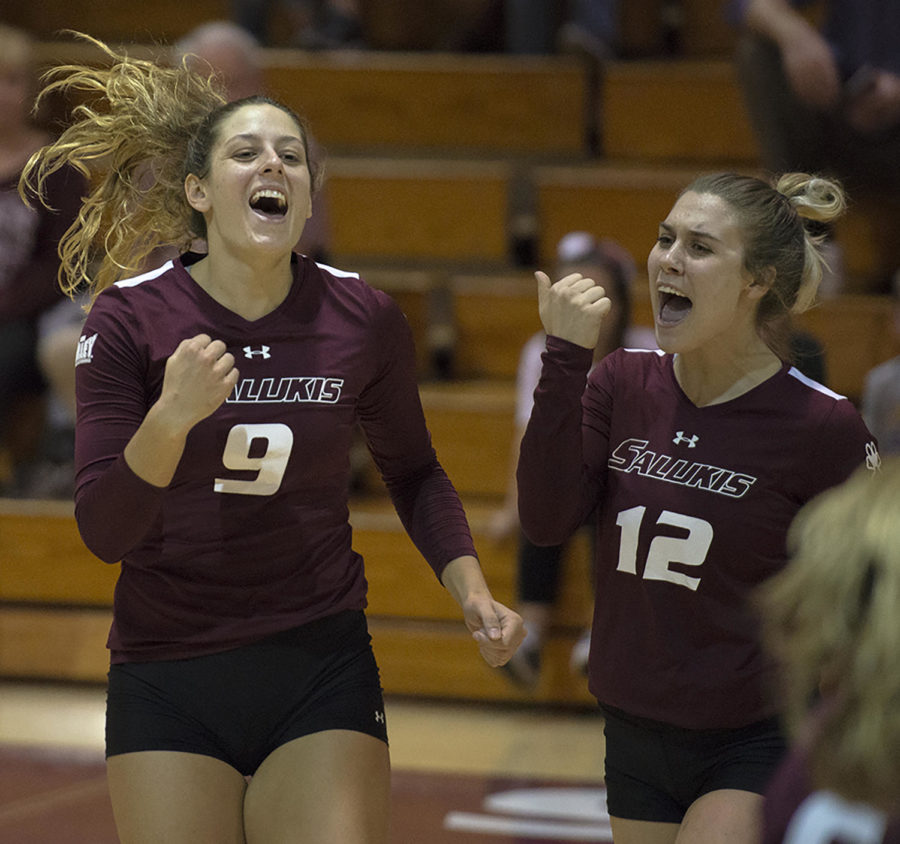 The Saluki volleyball team split a double-header on the opening day of the Arkansas State Invitational.

The Salukis opened the Arkansas State Invitational with a sweep against the Jackson State University Tigers (1-9) winning the sets 25-14, 25-13, and 25-17.

Southern started the first set with a 4-0 scoring run on the opposing Tigers.

However, Jackson State answered this with a 4-0 scoring run of their own tying the set 5-5.

This set remained close until the Salukis reached a 15-11 lead.

The Tigers would only score three more points in this set to 25.

Jackson State began the second set leading SIU, until a pivotal kill by junior outside hitter, Alysa Sutton, tied the set at 7-7.

The Salukis then rang off a 10-0 run, with two service aces from junior setter Alayna Martin, to top the opposers 17-7.

The Tigers were unable to regain full momentum only scoring five more points for the remainder, while Southern went on to win the set 25-13.

Jackson State came out in the third set looking for redemption as they jumped to a 9-4 lead.

The Salukis responded with seven unanswered points placing them two ahead of the Tigers.

The set progressed with both teams trading points until the score reached 18-15, with Southern in the lead.

SIU won the set only giving up three more points to the Tigers to complete the sweep.

Southern Illinois fell to tournament host, the Arkansas State University Red Wolves (7-5) in a five-set thriller on their second game of the day.

Arkansas State began the first set with a quick 4-0 scoring run on SIU.

Southern was unable to gain a scoring advantage against the Red Wolves and trailed for the remainder of the set, losing it 17-25.

The Salukis kicked off the second set with three consecutive kills from Nedoma who was assisted Martin.

They used this momentum and led Arkansas State throughout the course of this set.

However, the Red Wolves developed a momentum of their own and eventually tied the set 24-24.

SIU gained another point from a service error, but Arkansas State responded and tied the set once again at 25-25.

A kill by Brown pushed the Salukis ahead and they won the set 27-25.

In set three, the Red Wolves immediately took the lead due to some attack and service errors by SIU.

The Salukis rallied and fought their way back, but came up short losing the set 22-25.

The fourth set proved to be successful for SIU as they started it establishing a 4-0 run against Arkansas State with two kills from Nedoma and one kill from freshman outside hitter Jill Kavalauskas.

Southern led the set until the score reached a tie of 19-19, which they fought past to win the fourth set 25-22 on a kill from freshman outside hitter Kat Wagner forcing a fifth.

The Red Wolves began the fifth set going on a massive 7-0 scoring run against the Salukis.

SIU was unable to fight their way back from the deficit and lost the set 4-15.

Nedoma led the Salukis in kills with a total of 19.

Brown led in blocks with four and was second in kills with 13.

SIU (4-8) will close the tournament tomorrow morning at 10:30 am with a game against the University of Central Arkansas.