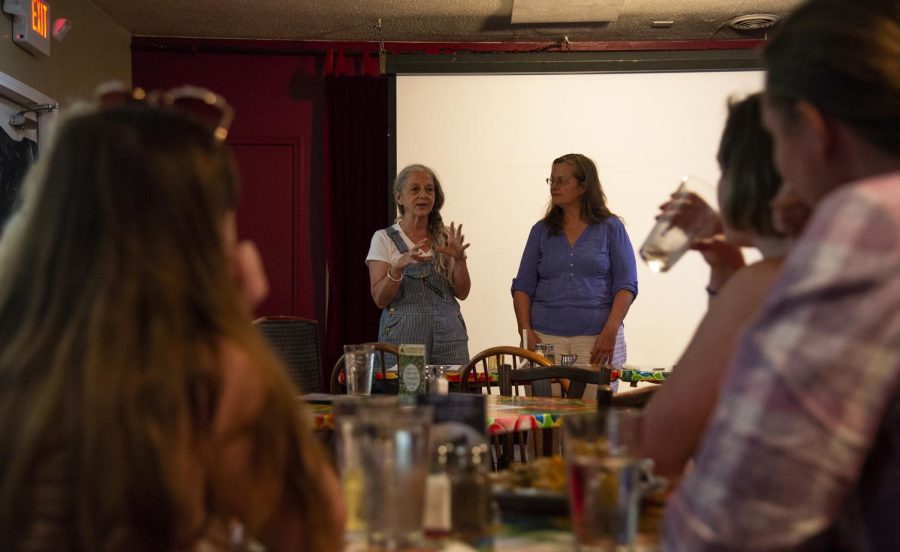 The Sustainable Living Film Series holds discussions based off of documentaries on the first Wednesday of each month, from April until October at Longbranch Cafe and Bakery.

Lynn Waters, coordinator of Sustainable Film Series, said since 2010, it showcases a film relating to the specific topic followed by a discussion after.

The discussion hosts are a different person every time, Waters said. Sometimes it’s an organization, a business person, or a person with a real passion for a topic.

The reason for these conversations after the film is partly because the Longbranch Cafe and Bakery values public forums where people can be educated and debate important issues, Waters said.

“The other part of it is because there are so many frustrating problems: social, environmental and economical,” Waters said. “We also wanted a forum where people could not only be educated and have awareness about the issue right now but also have discussion hosts that would provide action-based discussions.”

Waters said discussions raise awareness, not just about an issue, but the depth of an issue, so people can have a much better understanding.

“Hopefully, the effect that we would like to have is that people maybe look at themselves and say ‘oh, how can I feel empowered to participate in solving this problem,’” Waters said.

September’s film, Not Business as Usual, is a documentary about entrepreneurs that have decided to go into business for more than the bottom line, Waters said. They want to make a positive social impact, a positive environmental impact or both.

“Not Business as Usual represents conscious capitalism.” Waters said. “We know that [with] the post-Industrial Revolution era, any one of us can look around and see what that has created. It has created social inequities, environmental degradation, poverty, and globalization.”

Ramseyer said business owners should lead with what they believe in and their business will grow.

“But once we start looking at capitalism from a loving, caring, cooperative perspective then we can see that this system isn’t really evil,” Waters said. “It’s just the way we’re using it that can be damaging.”

“Since I’m also the publisher of the Sustainable Living Guide, this is something that I’ve personally been practicing for a good portion of my life,” Waters said. “I think seeing this film, it reinforced and encouraged me to continue.”

Waters said this film gave her ideas of other products and companies to put in the next edition of the Sustainable Living Guide for southern Illinois.

“The truth is, in general, when people come to these films they meet people, network and develop new relationships,” Waters said. “That helps everyone work cooperatively.”

Staff reporter Emily Cooper can be reached at ecooper@dailyegyptian.com.