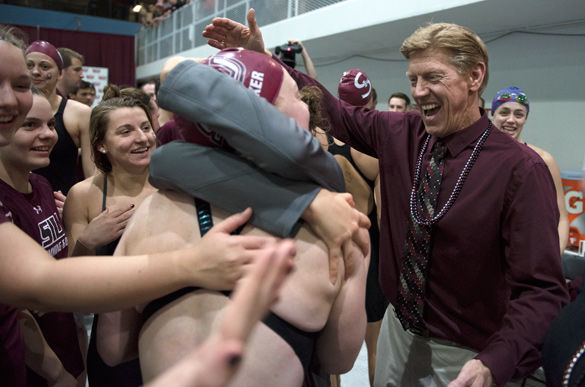 Coach Rick Walker leans in to hug his daughter, Kelsie Walker, a member of the final 400-yard freestyle relay Saturday at the Missouri Valley Conference Championships.

The SIU Women’s Swimming and Diving team has been placed on a three-year probation, given a $5000 fine and has had scholarships reduced after “standard” and “aggravated” rule infractions, the NCAA announced Friday.

Diving coach Chunhua “Joy” Zhao was found to be arranging “impermissible tryouts and lessons for prospects and two international student-athletes before and after they enrolled at the university,” according to the NCAA report.

Zhao agreed that she violated NCAA rules when, over the course of two years, she gave “fee-for-lesson” diving lessons for two student athletes on a regular basis along with other “impermissible lessons on a more limited basis.”

Rick Walker, head swimming and diving coach, was aware Zhao provided the lessons to the two student athletes but did not consult with compliance to determine whether the instruction was allowed under NCAA rules, according to the NCAA.

Zhao arranged for the then-volunteer diving coach to provide each of the student athletes each approximately “45 impermissible reduced-cost diving lessons,” according to the report.

The report did not name the two individual student athletes involved, but the swimming and diving team had two divers who fit the description of the report — Beibei and Baobao Ji.

Beibei and Baobao — originally known as Jiarong and Jiaxin respectively — came to Carbondale in 2014, but it was not until last season that they were considered eligible by the NCAA.

“I could not coach them when they arrived because they were ineligible; but since they became eligible I have seen a lot of improvement,” Zhao said during a November 2017 interview with the Daily Egyptian.

The violation was classified as a Level II-Standard for the university and Level II-Aggravated against Walker and  Zhao.

“The lessons began when the two athletes first arrived on campus as prospective students and continued after they enrolled at SIU as non-qualifiers,” according to the report. “The parties agree that the impermissible diving lessons resulted in recruiting and eligibility violations.”

The student athletes also completed and received travel expenses while ineligible and the NCAA and SIU both agreed that the violations “reflected that the head men’s and women’s swimming and diving coach did not demonstrate that he promoted an atmosphere of compliance and that he failed to monitor his staff.”

This is the university’s second major Level I or Level II infractions case — the only prior case occurred in 1985 and involved the men’s basketball program.

Zhao will be placed on a 5-competition-date for each season from 2018-2021. Walker will be suspended for six days during the 2018-2019 season — meaning no communication with student athletes or staff members.

SIU Women’s Swimming and Diving will also vacate any team results earned with ineligible athletes — individual results and awards for other team members can be kept.

The head coach and the diving coach will also attend the NCAA Regional Rules Seminars in 2019 — both attended the seminars in 2018.

The team must also inform swimming and diving prospects, in writing, that SIU is on probation for three years and detail the violations committed. If a prospect takes an official paid visit, the information regarding the violations, penalties and terms of probation must be provided in advanced.

The university has sent two letters to Recreation Center staff that clarified that student athletes are not permitted to teach lessons in SIU’s facilities.

The use of this system would have helped SIU identify that prospects were in the community prior to enrollment, according to the NCAA report.

In an emailed statement SIU Athletics said that they take full responsibility for the actions in the report and said that the sanctions are an appropriate response to the violations.

“At the same time, we remain supportive of head coach Rick Walker, whose mistakes in this matter were unintentional,” according to an emailed statement by SIU Athletics. “As soon as the errors were discovered, the University self-reported them and took steps to ensure our program operates within the guidelines established by the NCAA.”

Walker said he takes his compliance responsibilities seriously and regrets the mistakes that led to the NCAA sanctions.

“Although the errors were unintentional in nature… we must rededicate ourselves to the compliance education process to prevent such mistakes from happening again,” Walker said. “I have dedicated my entire coaching career to building a highly respected Swimming and Diving program at SIU and I will do everything in my power to make sure we do things the right way in our program.”

This article has been updated on Monday, Sept. 10, 2018 to include statements from SIU Swimming and Diving head coach Rick Walker and SIU Athletics.  The SIU Women’s Swimming and Diving violations were originally reported on swimming news-source “Swim Swam.”