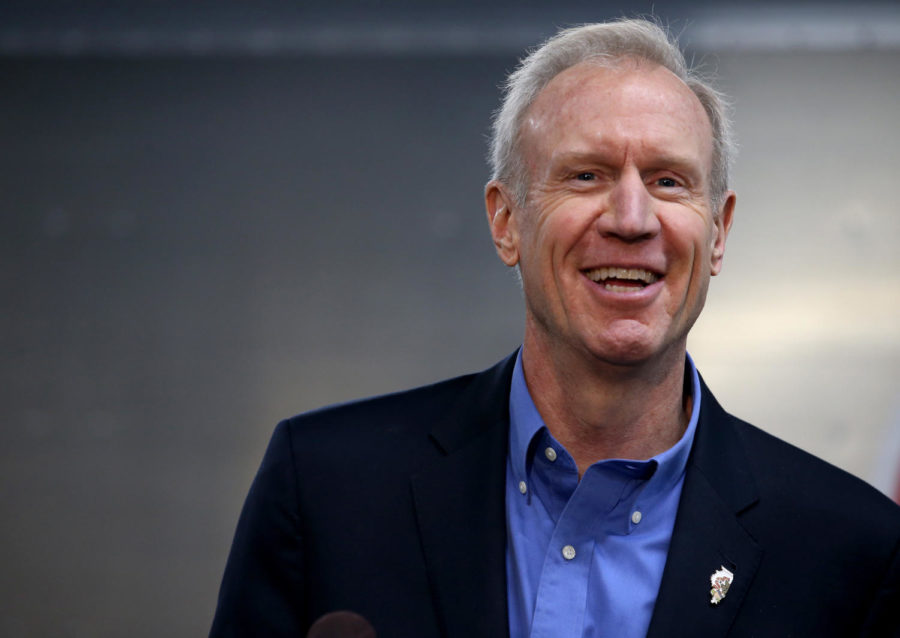 Governor Bruce Rauner speaks out during a press conference for an announcement of a donation from AptarGroup and Adapt Pharma, Thursday, Feb. 8,2018. The donation will go to help prevent opioid deaths. (Antonio Perez/ Chicago Tribune)

“I was pleasantly surprised that [Rauner] was able to see them as important enough to put funds back in the budget for that,” Hood said.

Hood said she thinks it would help SIU because it causes greater collaboration for the campus because the area needs function at a higher rate because there are fewer referral sources.

“We absorb all of our students, but with more funds being channeled that way we could really collaborate or find ways to strengthen programs that would allow us to function better, more efficiently, and more effectively,” Hood said.

Having health insurance to cover substance abuse is an excellent thing, Hood said. If you are getting counseling at the Gateway Foundation Alcohol and Drug Treatment Center of Carbondale, then it could be a needed addition and some clients won’t have a problem with that because they probably couldn’t get that previously at all.

“Even though they may have to pay, it’ll probably be a lot cheaper then if they would have to pay for it out of pocket,” Hood said.

Hood said on the other hand when it comes to addiction when someone is going in and out of rehab this bill would be helpful.

“How helpful would that be if they were able to get services, get sober and then have ongoing service so that they can stay sober,” Hood said.

Anna Jurich, executive director of Gateway Foundation Alcohol and Drug Treatment Center of Carbondale, said she thinks there are a lot of people with substance use and mental health issues that need treatment, support and funding.

“The more funding that’s available for those individuals, the more likely they are able to get treatment,” Jurich said.

“Their inability to get treatment causes them to show up at the emergency room more often or show up unemployed or needing other services, such as homeless shelters or food services,” Jurich said.

Jurich also said if they’re able to get treatment it absolutely gives them a better chance of being sober, being healthier and productive.

“A task force was developed to look at the goals and objectives of our program and so we created Salukis on Your Side, it’s housed in health and promotion services,” Morrison said.

Morrison also said Salukis on Your Side is heading into the third and final year of the grant and the grant’s goals were to help develop workshops and programs related to suicide prevention and awareness.

In regards to substance abuse, Salukis on Your Side do know the role it plays in mental health, Morrison said.

Morrison also said half of those deaths are due to alcohol.

“However, mental health is an area that I feel should be supported and additional funding would allow for an increase in needed services,” Morrison said.

Staff reporter Claire Cowley can be reached at [email protected].