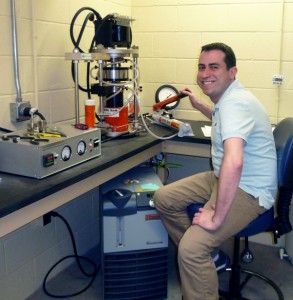 One university professor looks to the stars in search of water inside the planet Venus.

Justin Filiberto, an assistant professor in geology, had new research on reanalyzing data and creating models for future missions to Venus. His work is published in the March edition of Elsevier’s Icarus Journal – a publication dedicated to solar system studies.

His paper titled, “Magmatic diversity on Venus: Constraints from terrestrial analog crystallization experiments,” consists of five models concerning rocks. An article on his work was published in the Jan. 17 issue of Inside Science.

“There’s always been this thought that Venus is very similar to the Earth in chemistry,” he said. “But that was sort of broad chemistry. This was the first time that we could really pinpoint some amount of water in the interior of Venus.”

For his research, Filiberto studied igneous rocks, or rocks that come from magma, and form crystalized lava on different planets.

He used analysis from probe rovers to observe how these rocks formed 30 years ago.

This is Filiberto’s first research about Venus.

Most of his efforts have been focused on Mars, which include looking into Martian meteorites and studying information from rovers.

Filiberto said he used data from 30 years ago to study Venus. The information that he used is from a series of Russian landers created and used from 1961 to 1984 called Venera and Vega.

“The Russians landed and they had an instrument that measured the chemistry of the rocks,” he said, “and over the past 30 years people have rehashed what these rocks mean, what they can tell us about Venus geochemistry and things like that.”

Laurie Achenbach, interim dean of the college of science, said Filiberto is one of a handful of geologists to get money from NASA on a consistent basis.

“It’s a statement about the strength of his work that he gets external grants, especially of significant sums,” she said.

Filiberto is now working with Daniel Nunes at the Jet Propulsion Lab in Pasadena, Calif., to improve current models.

“We’re going to take this to the next level and look at the surface and go back to the original landers,” he said. “So using geophysics as well as geochemistry to tell something about the interior of Venus.”

Filiberto said he thinks there is no life on Venus, but Mars previously may have been suitable to sustain life.

“Where there’s habitats doesn’t mean there’s life,” he said. “But at least there’s potential for life, it was definitely habitable at some point.”

Sally Potter-McIntyre, associate professor who studies sedimentology on Mars, said in 2005 NASA landed two rovers on the surface of the planet and discovered sedimentary rocks.

“That actually turns out to be a very interesting deposit in that these were very likely deposited in a lake,” she said. “They’re very similar to some rocks that I study on the Colorado Plateau.”

Potter-McIntyre said there is a possibility microscopic life is living on Mars.

“Life almost certainly does not exist at the surface of Mars because there is too much UV, it’s too dry,” she said. “In the subsurface there’s evidence there’s liquid water, so there may be extant life living on Mars right now.”

Potter-McIntyre said while this is a possibility, it is more likely there was life in the past, when Mars had bodies of standing water.

Filiberto said the Russians are pushing to launch another Venus probe mission in 2023, called Venera-D.

Luke Nozicka can be reached at [email protected]