Column: In the Dawg Pound with Dillon 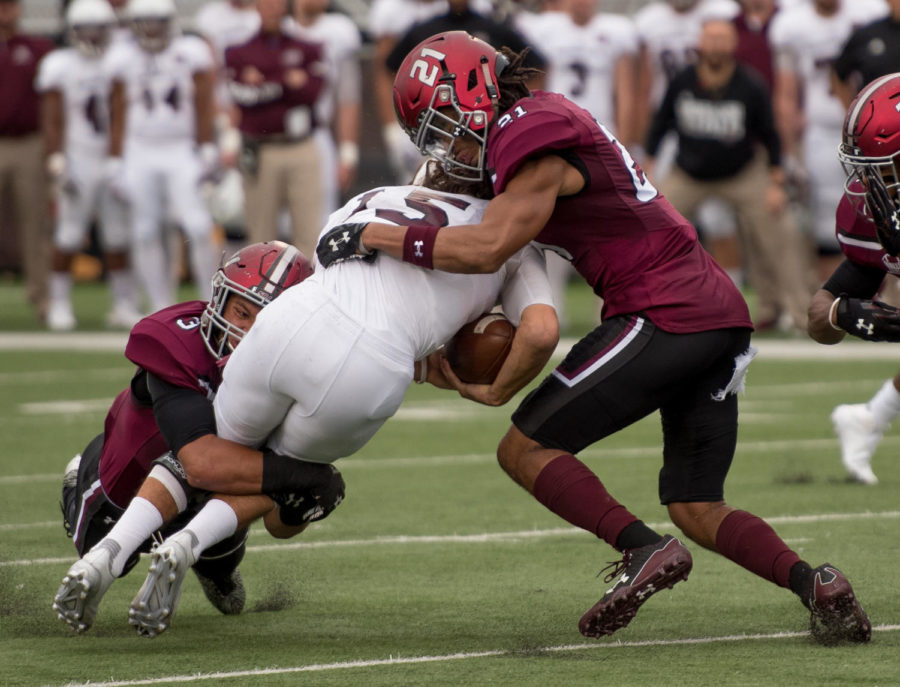 Just one game into the season and the SIU football team has already given us so much to talk about.

On Thursday the Salukis took on the Murray State Racers and took them down pretty convincingly.

After giving up an early field goal in the opening quarter, Southern put together four touchdowns in the first half to the Racers’ one giving them the 28-10 advantage.

The Salukis put up three more touchdowns across the final two quarters to secure the 49-10 victory and 1-0 record to start the season.

SIU went into the contest only 2-8 when playing Murray on the road.

Statistics show they struggle on the road, but the Salukis did not play like they were struggling.

The second thing to take into account is SIU never attempted one field goal. For the most part, each drive either ended in a touchdown or a punt.

Now that can be both good and bad for the team.

On the plus side, this can mean SIU never settles for less and they can clutch in the red zone.

On the downside, this can also mean the Salukis struggle to move the ball and they are an all-or-nothing team.

It’s preferable to think they are never going to settle for less considering the special teams in the 2017 season was not the greatest aspect of the team.

Junior running back D.J. Davis stood out offensively for the team.

Davis netted 132 rushing yards on 19 attempts but couldn’t find his a team a touchdown.

The junior’s ability to move the ball is going to be a key aspect of SIU’s game this year.

If Davis can continue to put up these numbers every game, the opposition is going to have to keep an eye on him at all times, which opens up a lot of wiggle room for senior quarterback Sam Straub.

Straub did not show off what he can truly do in the Salukis’ opening game as he completed 16 passes out of 29 totaling 107 yards with one touchdown and one interception.

The fans should have expected a rocky start from the senior as he spent most of the 2017 season on the bench due to an injury.

The main point is Straub is going to have to find himself again and Davis is going to be a big help in that because if he can continue to take pressure off of the quarterback he will have more opportunities to complete some big passes.

On the other side of things, the defense really shined in the opening game for Southern.

Just looking at the score, SIU only allowed ten points. Obviously, they had to have been doing something right.

The defense allowed only 17 pass completions out of 30 attempts for 138 yards from Murray’s first-string quarterback, which is not the greatest, but it is a start.

SIU forced several turnovers starting with two interceptions, one by junior linebacker Airan Reed that was returned for a touchdown.

Then there was the two fumbles the Salukis forced, both of which were returned for touchdowns with a total of 100 yards.

The defensive highlights can spark a fire underneath the team and lead to some big runs, which is what happened Thursday evening.

Besides all of this, SIU is going to be truly tested on Saturday when the team takes on Ole Miss.

While Ole Miss is not the toughest team, they certainly are not a joke.

One of two things can happen on Saturday.

On one hand, SIU can just roll over and take their beating like they did against both South Dakota and South Dakota State last season and be done with it.

On the other, they can put up a serious fight like they did against Memphis in 2017 and prove they are not a team to look past.

If they put everything they have into Saturday and at least make the score close, this could set the tone for the next week when Southern takes on the SEMO Redhawks.

All in all, SIU has shown a lot already, but they need to keep the good work up if they want to make a name for themselves.

SIU (1-0) will be taking on Ole Miss on Saturday. Kickoff is scheduled for 3 p.m.