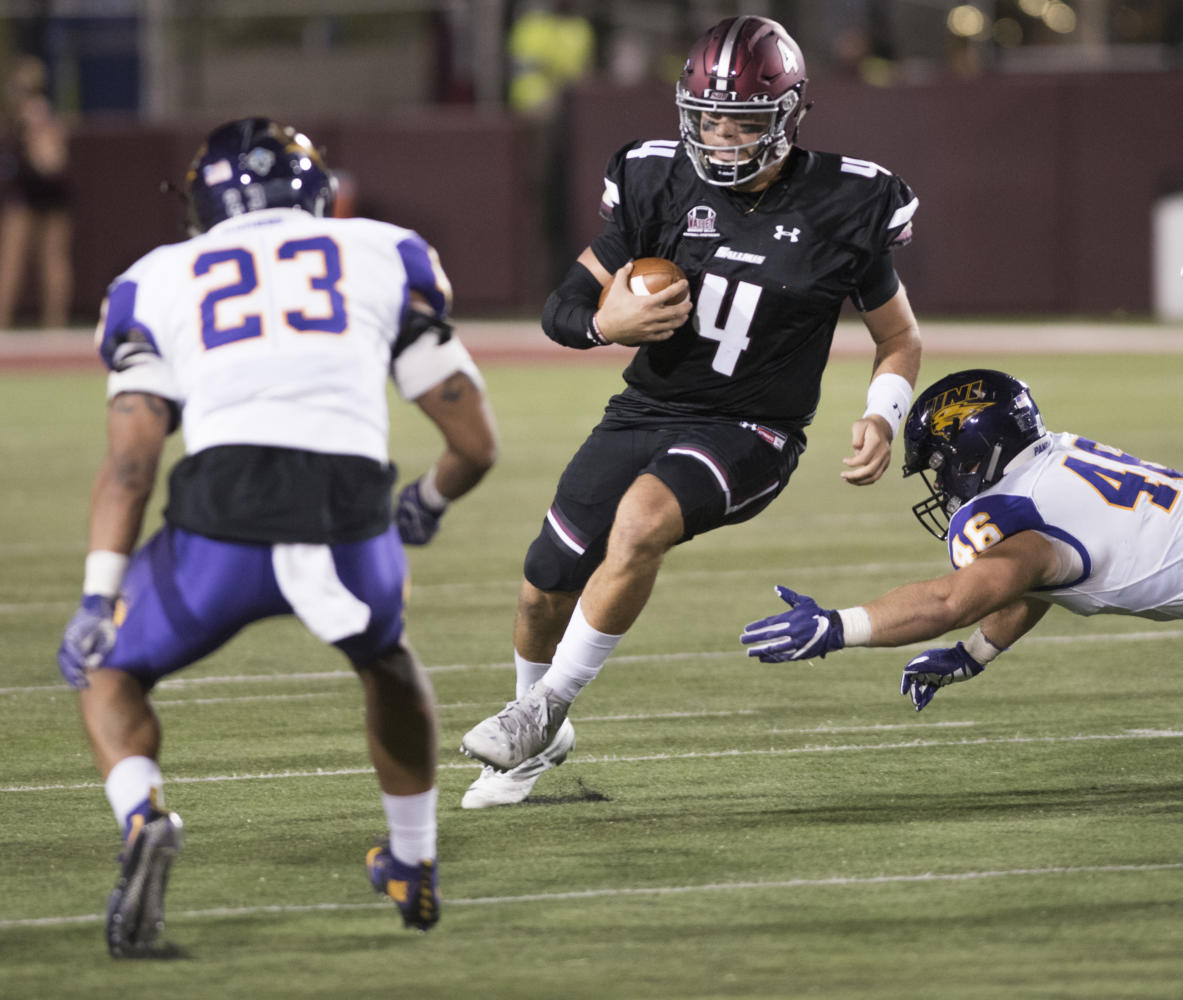 The Saluki football team fired on all cylinders Thursday night, rolling past Murray State on the road in Murray, Kentucky 49-10 in their regular season opener.

The game started with both teams electing to punt after short drives.

Murray State turned the play into three points, kicking a field goal after being stopped by the Southern defense at the goal line.

On the next possession, Straub led SIU on an 11 play, 75-yard touchdown drive finished by an eight-yard touchdown toss from Straub to senior wide receiver Darrell James.

James finished with three catches for 29 yards and a touchdown.

The second quarter saw SIU take over. The Salukis stopped Murray State on their first possession of the quarter after two consecutive first down runs and didn’t look back.

Southern marched down to the Murray State 18-yard line where they found themselves in a fourth and short situation.

They failed to convert, junior runningback D.J. Davis was stopped in the backfield.

The Saluki defense stepped up once again, with junior cornerback Madre Harper forcing a fumble which was scooped and scored by sophomore safety Qua Brown to make the score 14-3.

On the very first play from scrimmage after the touchdown, Harper forced another fumble which was recovered by Brown again, giving SIU possession at midfield.

The Salukis were unable to score, but pinned Murray State deep in their own territory.

From there, junior linebacker Airan Reed intercepted the pass and took it to the end zone for another Saluki defensive touchdown to extend their lead to 21-3.

Murray State scored a touchdown late in the half with just over a minute left to make the score 21-10 heading into halftime.

All Straub needed was a minute to march Southern downfield, with the help of his running back Davis who ran for 55 yards during the drive.

Davis finished with 19 carries for 128 yards while also grabbing three passes for 16 yards.

The drive was capped off by a three-yard rush by senior quarterback Matt Desomer, bringing the SIU lead to 28-10 just before the end of the half.

The Salukis continued pushing down the field in the start of the second half, scoring first after a three-yard touchdown run by senior running back Jonathan Mixon capped off a 42-yard drive led by Straub and made the score 35-10.

Murray State began driving downfield on the next possession but was stopped when junior defensive back Jeremy Chinn forced a fumble which was recovered and scored by freshman safety Michael Eibert to stretch SIU’s lead to 42-10.

The SIU defense recorded six turnovers during the game, with four recovered fumbles and two interceptions. The Saluki offense was efficient, posting only two turnovers in the contest.

The Salukis will now turn their attention towards Ole Miss, where they will travel to Oxford, Mississippi next Saturday to face the Rebels. Kick-off is scheduled for 3 p.m.