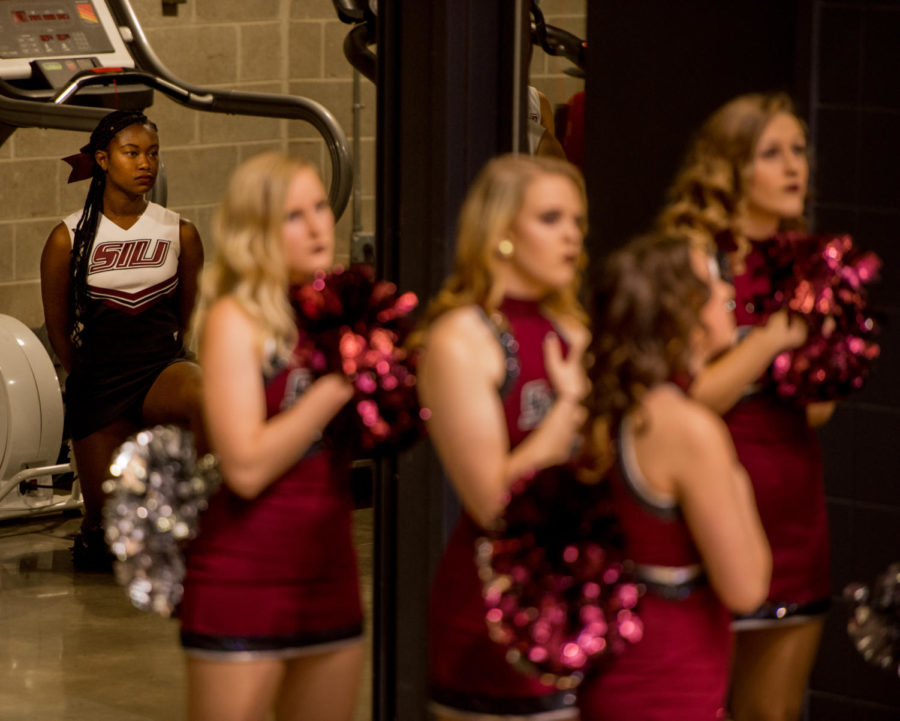 SIU Athletics has rescinded new language in the Student Athlete Code of Conduct that said any displays of activism will not be tolerated and could lead to the individual’s removal from their respective program.

“It is a privilege and not a right to be a student-athlete, cheerleader or spirit member at Southern Illinois University,” according to the rescinded addition originally provided by Liz Jarnigan, SIU Athletics senior woman administrator.

“Members of the department including student athletes cheerleaders and spirit members must remain neutral on any issue political in nature when wearing SIU official uniforms and when competing/performing in official department of athletics events and activities,” according to the addition. “Any display (verbal or non-verbal) of activism (either for or against) a political issue will not be tolerated and may result in dismissal from the program.”

Tom Weber, associate athletic director over communications, said that the purpose of the addition was to display unity and to provide a positive experience for student-athletes and Saluki fans.

“However, some have interpreted the language to suggest that our aim was to restrict the free speech rights of our students – that was never our intent,” Weber said. “We fully support the free expression of ideas and opinions among our students and the entire Saluki family.”

Weber said given the community feedback it appeared that athletics “somewhat missed the mark” and do not plan to use it as currently written but would revisit the addition at a later date.

Praise and criticism for SIU Athletics has been voiced on social media after the Daily Egyptian released the story on the addition Tuesday. Questions and concerns over the language used arose from national organizations, such as the American Civil Liberties Union.

“Southern Illinois University’s new policy suggesting that players or cheerleaders could be removed from their respective program for peaceful ‘displays of activism’ falls short of the critical responsibility of a public university to honor and protect free speech rights for their students,” said Ed Yohnka, Director of Communications and Public Policy at the ACLU of Illinois.

William Freivogel, a media law professor at SIU, said the addition to the Code of Conduct does not make sense.

“The government can make neutral rules for students to follow and universities can set higher standards of conduct for athletes, cheerleaders and other student leaders,” Freivogel said. “But in the process, the government can’t discriminate based on the content or viewpoint of speech.”

Freivogel said the university cannot punish a student leader for taking a knee during the anthem if the school is also not prepared to “punish pro-flag, pro-military or Tim Tebow-style religious gestures.”

Magarian said he does not believe either of those situations are viable on their own terms.

Yohnka said it is more troubling that the policy specifically suggests such displays will not be tolerated on a political issue.

“A central purpose for any public university is to engage students and the community in the issues of our time,” Yohnka said. “Schools should not threaten students – or hide them away – because they engage in protests that some in the community may not agree with.”

Freivogel questioned the university’s stance on the addition and asked “how can the university say activism is bad for student leaders while non-involvement is good?”

“Rules favoring apathy over activism discriminate on the content of the speech – and they don’t make sense,” Freivogel said. “Don’t we want our student leaders to be activists in shaping society, not people who stand mutely on the sidelines?”

Magarian said the university picking and choosing what speech to ban creates an issue.

“What the university really seems to be saying is ‘We don’t want people making political noise because we’re trying to sell college athletics and politics are off-putting,’” Magarian said. “If the school is really treating political speech worse than other kinds of speech because political speech is more damaging to the brand – that’s not okay.”

Magarian said the claim that this is about sports, not about politics, is incoherent.

“I think that everything that we do or don’t do has political significance especially and obviously in environments where political ideas have manifestly been introduced into the environment,” Magarian said. “When [the cheerleaders] took a knee… they revealed, in a very straightforward and unmistakable way, the political content of that space.”

Weber said the department will be working with student-athletes to turn the language into a positive values statement related to the focus and purpose of athletics.