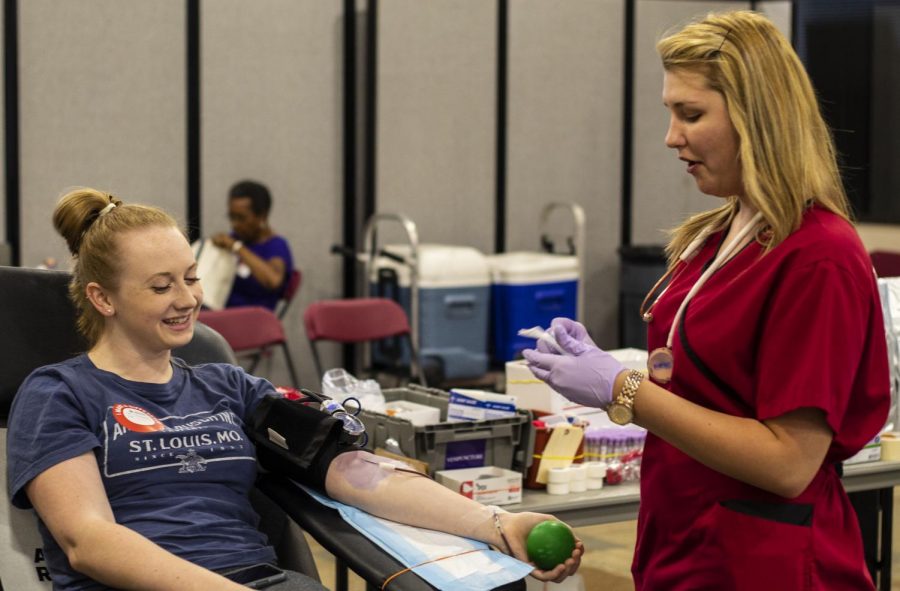 The American Red Cross of Central and Southern Illinois is taking donations to combat the millions of Americans who need blood.

First time donors and returning donors were encouraged to visit the lower level of Lentz hall on Aug. 30 from 1-6 p.m.

Health aids want to remove the stigma about donation procedures by offering details at emergency need blood drives on many campus locations.

Only three percent of the population donates and a donor only donates one and half times a year, Michelle Johnson, American Red Cross account manager and donor recruiter, said.

Johnson said within the last four years, each year the Red Cross has had 80,000 fewer first-time donors than expected.

“So that little three percent is dwindling more,” Johnson said.

Johnson said she thinks some people just assume when they go to the hospital the blood will always be there for them, but there’s no substitute. If people do not donate, they do not have blood.

“One in six people in the hospital will need blood, the average transfusion is two units, and 97 percent of us at some point will need a blood or blood product in this country,” she said.

When the Red Cross asks people to donate blood, many of them say they don’t like needles, Johnson said.

“You know what, nobody never really likes needles, but to have a needle in your arm for ten minutes, you save up to three people’s lives,” Johnson said.

She said the insertion has discomfort, it’s like a pinch.

“It’s a little discomfort, for life-saving,” she said.

The iron levels test they do by pricking your finger is the worst part, Johnson said. Your finger has more nerve endings than your arm.

Johnson said bringing your phone, music, or game as a distraction and think about the purpose for why you’re donating helps take your mind off it.

“The blood donation process from the time you arrive until the time you leave takes about an hour,” Johnson said. “The donation itself is only about eight to ten minutes on average.”

“They were very efficient in the check-in process,” Park said. “The volunteers asked me some questions, checked me in, sat me down in a chair and stuck me with the needle and then it was done.”

Park said she had a greater fear of the pain than it actually was.

“Today it was fine,” Park said. “They asked me about my medicial history, it was easy yes or no questions on the computer and they took my body temperature, blood pressure and iron levels.”

She said she thinks the biggest impact is the reward you get out of it.

“There’s 24 hours in a day and it takes 20 minutes to donate and that 20 minutes can save someone’s life,” Park said.

Johnson said when someone gives blood, their donation can be divided into three sources of help for patients.

“We can divide that into platelets, plasma and red blood cells. So that one donation can help three different people,” Johnson said.

Johnson said your platelets replenish in about a week and your red blood cells could take up to four to five weeks to replenish.

“When you give it, your body just makes more,” she said.

Johnson said whole blood can only withstand for 45 days. You can only donate blood every 46 days, so they are constantly in need of blood.

To put it into perspective, Johnson said one accident victim can take up to 100 units of blood. So, that’s 100 donors donating to that one person.

She said cancer patients, children or babies require donors that have what they call CMV negative blood type. That means there are certain antibodies that aren’t in your blood, so it can go to people with a more immune compromised system.

“There are so many people that need sickle cell transfusions and to match those people,” Johnson said. “It’s not just a blood type match, there are so many other markers to match that are based on your geographical history and heritage.”

Amber Daly, a sophomore studying physical therapy assistance, said she was also nervous because the last time she donated blood, she passed out.

“I knew it would help this time if I helped somebody if I can because it takes no time at all to make a difference like that,” Daly said.

Blood donations are pretty steady with acceptions two times a year, that being the summer months that concurs with the end of the school year, through the summer until probably about the end of August around Labor Day, according to Joseph Zydloe, American Red Cross communications manager.

“The reason we do that is because we do 20 percent of our blood drives at schools, so when schools are out toward the end of May [or] early June, […] that’s 20 percent that we have to make up over the span of almost three months,” Zydloe said.

He said this becomes a challenge. When the year gets closer to the holidays like Thanksgiving, people don’t donate.

“And the need for blood is constant, every two seconds someone in this country needs blood and that doesn’t change,” Zydloe said.

Zydloe said blood is a perishable product, it only has a 42 day shelf life.

He said they really start to taper off toward the end of June when school is out. Within a month later, during the Fourth of July, they put out an appeal for blood donations for emergency need.

During the week, the Red Cross blood drive on campus is expecting 25 donors. Presenting donors will receive a five dollar Amazon gift card by email.