SIUC, Carbondale community give testimony on funding and future of university system 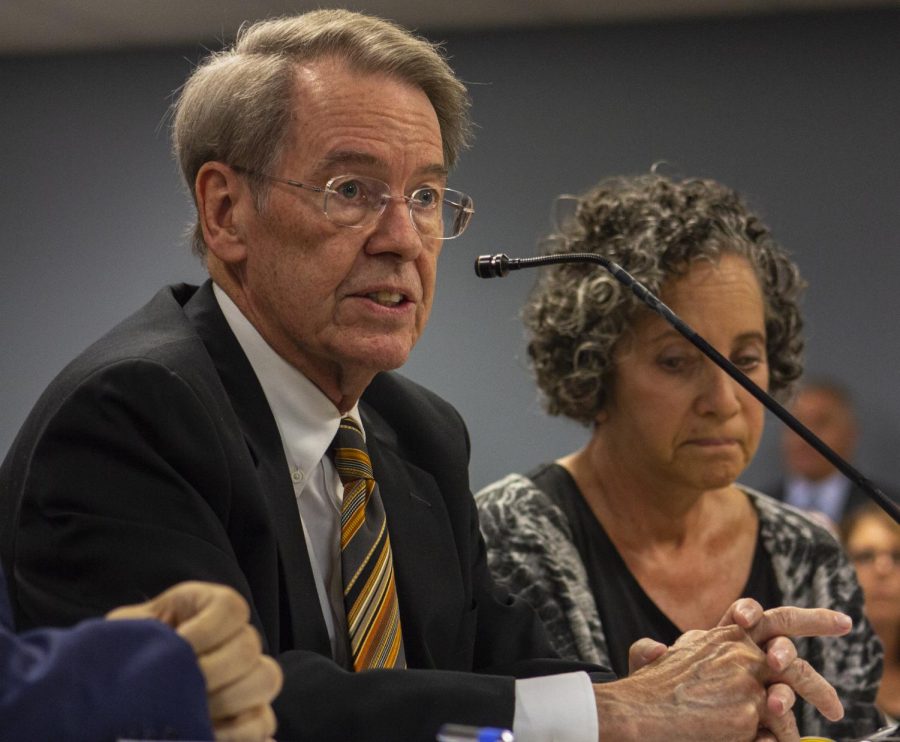 Stakeholders were brought to address the panel based on their affiliations with the campus and community.

J. Kevin Dorsey, Interim SIU President, said he “has been asked to lead the SIU System at a time when the university is suffering” and that his first goal as president is to help the system heal.

“Hopefully [we can] walk in each other’s shoes and expand our efforts to collaborate and cooperate between all the campuses and sites,” Dorsey said. “Part of that healing is for each of us to recognize the value that every one of [us] brings in making central and southern Illinois a great place to live and work.”

During an August special meeting, the SIU Board of Trustees approved the request-for-proposal process for the selection of an independent consultant that will be chosen during the September meeting, Dorsey said.

There will also be a management audit to review the effectiveness of SIU remaining a system and another study to determine to determine if any campus functions could be moved to the system level, Dorsey said.

Dorsey said he is against legislation that would separate the system, an item that was presented last April by Rep. Jay Hoffman (D-Swansea.)

See more: SIUE chancellor pushes back on SIU Board of Trustees vote

“I certainly didn’t bring that request forward — I think that was made by your fellow legislators,” Dorsey said to Ammons. “I’m not supportive of it.”

“[I] encourage our campuses to bring their unique talents and attributes together to collaborate with each other to build up programs not only to our students but also to the people of this region so that we may fulfill our mission to improve the lives of everyone that lives here,” Dorsey said.

SIU Chancellor Carlo Montemagno said he shared similar sentiments with Dorsey and said he hopes to see the universities become closer together.

“There are great things happening on both campuses across the system and our hope is that moving forward we’re going to be able to bring ourselves closer together and not be driven apart,” Montemagno said.

As the Carbondale campus prepares to celebrate its 150th anniversary in 2019, Montemagno said he is looking at ways to prepare the university for the next 150 years.

Regarding talks on the university’s enrollment decline, Montemagno said the administration is in the process of “turning that ship around.”

“We’re doing this through reorganizing our campus to make sure we fit the needs of the future,” Montemagno said.

Alumni interaction and fundraisings have been another goal for Montemagno.

On state funding, Montemagno said the university started seeing a negative impact around 2001 due to the lack of funding but a source of stable money from the state would make a difference.

“Stable money helps — having a multi-year budget for two or three years so you can do some real planning,” Montemagno said. “When you’re hiring a faculty member, you’re making a permanent multi-year commitment to an individual.”

Montemagno said it would be great to have multiple-year outlooks in order to plan for recruiting and faculty members.

The chancellor also said that negative press has had an impact on the university.

“We need to understand that words matter and almost all of the publicity that I’ve seen since I’ve been here in Illinois education has not been as shiny and bright as we would like,” Montemagno said. “I think that we need to spend a lot of energy talking about what we’re doing that is right.”

Montemagno said a recently passed MAP grant bill was not covered by the media outlets.

“It’s nowhere. You don’t see it in the press, you don’t see it being advertised, you don’t talk about the impact that it’s going to have on the lives of all of these individuals,” Montemagno said. “We need to do a better job promoting how Illinois is behind higher education and how Illinois understands that education is the passport for prosperity in Illinois.”

See more: Editorial – The Daily Egyptian is not a public relations firm for SIU

Montemagno said the upward swing at the university is part of the school’s re-emphasizing four attributes associated with getting an education at SIU — communication, creativity, collaboration and critical thinking.

“We are revamping the academic programming — we’re making core curriculum extend through all four years,” Montemagno said. “I want to have a place where anybody can come learn about anything they want to learn about and to do it at a world-class level.”

Montemagno said there has been work done on improving the student experience.

Montemagno said they “created a community where the dormitories are 97-98 percent full versus 68 percent full.”

There have also been changes in the way meal cards work, Montemagno said.

“Now they can use part of their meal plan to go to Chick-fil-A in the Student Center and buy a meal there,” Montemagno said.

As part of the plan to improve the student experience, Montemagno said a new intramural esports arena is to be placed in the Student Center within the next two months.

“The whole idea is having a collegiate experience where [students] are having fun… and growing as individuals to be successful,” Montemagno said.

The focus moving forward is accessibility, the university and rigorous scholarship, Montemagno said.

“By doing that we will reassert ourselves as the maroon ruby in the crown of higher education in Illinois,” Montemagno said.

Marsha Ryan, SIU Board of Trustees member, said a funding study needs to factor in enrollment, the cost of educating and deferred maintenance costs.

Ryan said Duane Stucky, Vice President for Financial and Administrative Affairs, sent out seven request-for-proposals for a system funding study. Six are expected to be submitted.

“It is the full board’s solemn pledge to discover the facts with the evidence and follow the evidence wherever it leads,” Ryan said. “We will do this work and fairly apply the evidence-based formula to our unique campuses.”

Ryan said the system is valuable and that the board will treat each campus with respect and without bias, but Sean Cooney, a graduate student in the Educational Administration and Higher Education does not believe that can happen without holding officials accountable.

Cooney called for the removal of board chair Amy Sholar, whose correspondence showed she worked with former SIU President Randy J. Dunn in an attempt to shift over $5 million from Carbondale to Edwardsville.

“I don’t know how we can justify removing a president for the things he did… and then not remove other people who also did the exact same thing,” Cooney said. “I don’t understand how we can sit here and justify moving forward if we can’t clean up the past.”

Cooney said integrity and respect for higher education as a whole are more important instead of campus affiliations.

“We should be doing the best for everyone,” Cooney said. “We need to make sure the funding is available for everyone — that means supporting all of our campuses.”

Ammons said the Higher Education Committee does not want to be involved in the micromanagement of higher education.

“I have not participated one day as a member of Higher Education in determining how allocations work between these institutions — that’s not our job,” Ammons said. “What we do is fund higher education as a state and the universities decide where that money goes.”

Ammons said she would not be in favor of a bill that would change that.

For Mitchell, SIU may not have been his first choice but it was his “best choice.”

“I believe that [SIU] has helped me grow into the individual that I am now,” Mitchell said.

Mitchell said there is something wrong when the budget is being stretched so far that the two sibling schools “are at each other’s throats.”

“I have slowly watched this campus deteriorate over three years and often feeling neglected by the state,” Mitchell said.

Mitchell said there is a conversation being held by the undergraduate students that most people in the room aren’t hearing and probably won’t hear.

“A lot of the students don’t feel supported at the university,” Mitchell said.

Mitchell said he entered the university on academic probation but he’s been able to persevere with the assistance of student programs, specifically the Center for Academic Success, which has since been eliminated.

“The university lacks a lot but it also [builds] character,” Mitchell said. “It forces the students to work with what we have.”

A panel made up of local business owners spoke on the economic impact that the university made.

Sheffer also said he was opposed to a split of the university system.

“It is so important that all three campuses work together to stay together,” Sheffer said. “We are the strongest when we are together.”

James Karayiannis, owner of Pinch Penny Pub, spoke on the roots that his family has put in southern Illinois through their business.

Karayiannis said going as long as Illinois did without a budget creates uncertainty for families looking at sending their children to Illinois universities.

“Uncertainty is like cancer — it never goes away, it weighs on you every day and it drains hope,” Karayiannis said.

Karayiannis said when you have children and one is struggling “you don’t just cast [them] off to the side, you invest in that child — [they] need the help the most.”

Mike Henry, Carbondale mayor and Gary Williams, Carbondale city manager, were slated to speak but did not attend the hearing. John Pollitz, Dean of Library Affairs, did not publicly speak on the matter but filed a record of appearance only.

Leading up to the meeting, eight individuals filed witness slips with no position on the SIU System Appropriation, one filed a witness slip in favor and one filed a slip against.

Welch said he thought the hearing was engaging, productive and informative.

“I was happy to see we had a packed house of people that were willing to come out and share their concerns with us,” Welch said. “We’re here to listen and take in that information and go back and make some important decisions.”

Montemagno said moving forward, compromises would have to be made but the “institution’s best days are ahead of us.”

“The way we move forward is by working together and understanding that we have to make compromises on things that we do to be sure that we position ourselves to meet the needs of the future,” Montemagno said.

Montemagno said those needs come not only from students, but the community as a whole.

“Once we embrace that and go forward like that, we can’t help but win.”

The hearings will continue today at Edwardsville.