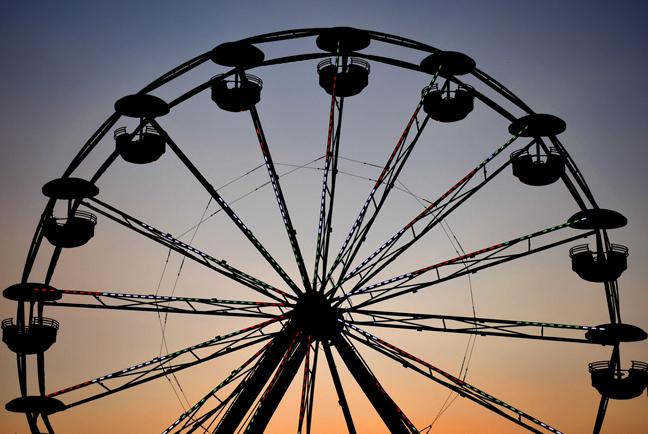 The sun sets behind the Ferris Wheel on Sunday, Aug. 28, 2016, at the Du Quoin State Fair. (Athena Chrysanthou | Chrysant1Athena)

The DuQuoin State Fair will be hosting a series of concerts at the Grandstand stage from Saturday, Aug. 25 to Saturday, Sept. 1.

Country artists Phil Vassar and Love and Theft, will close the concert series on Sept. 1.

Acts throughout the week include Brothers Osborne, Cheap Trick, Blackberry Smoke, and more.

Tickets for the concert series can be purchased through Ticketmaster or at the fairground box office. The box office is open Monday through Friday 9 a.m. to 9 p.m. Concert tickets do not include parking or admission to the Fair.

No outside coolers are permitted in the Grandstand. Gates open 1 hour prior to all shows.

Twilight Harness Racing, the United States Auto Club Silver Crown and the Automobile Racing Club of America Racing Series events will also take place at the Grandstand during the fair on Aug. 29 and Sept. 2 and 3 respectively.

The carnival opens weekdays from 4 p.m. to 10 p.m. Weekends the carnival will be open from noon to 11 p.m.

More information can be found at https://bit.ly/2v7VplT.

Staff writer Brandi Courtois can be reached at [email protected]