Column: In the Dawg pound with Dillon

A look into fall sports 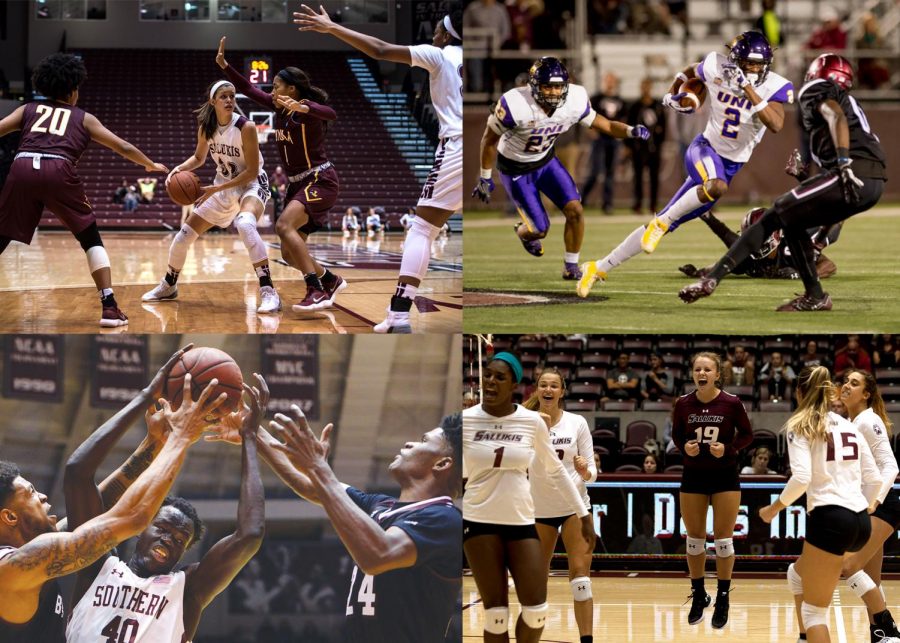 Summer break is coming to a close and the Salukis are winding up for a new year of sports. It’s time to take a look at what’s to come in the 2018-19 seasons.

The volleyball team will jump-start their season first with their home opening game set for August 18 against the Eastern Illinois University Panthers.

While the Saluki volleyball team did not have the most ideal 2017 season, finishing with a 6-23 overall record; they still showed promise with their youth.

A rocky season was to be expected as the team kicked off the season with a new coach along with several freshman players.

With one season now under the new additions’ belt, you can expect to see more chemistry amongst the team which will produce better results than in the previous season.

However we saw a few players show that they are more than capable of filling their predecessors’ shoes, most notably sophomore outside hitter Maggie Nedoma and sophomore libero Alison Thomas.

Nedoma has shown that she can really put some heat on the ball and Thomas has improved her serve to establish herself as a viable option.

With the young team now coming together for their second year, you can expect to see a drastic improvement from their previous season and a possible top-three finish in the conference.

The football team will begin their season on August 3o when they take on the Murray State Racers.

The football team has struggled for three straight seasons with a combined record of 11-22.

There are several factors that contributed to three sub-par seasons, to note a few are the injury of quarterback Sam Straub, the poor defense and overall execution on offense.

One positive thing to take out is this will be the third straight year where the team will have the same coaching staff.

With a consistent coaching staff, the team chemistry will only build and strengthen the team overall.

With Straub going into his final year, it’s likely to think he will go all out in his senior campaign and possibly turn things around for the Salukis.

The women’s basketball team has not yet released their schedule but more than likely will start their season in late October with a couple of exhibition games.

While the team only finished fourth in the conference in the previous season, they gave their fans plenty of reasons to believe in a top-three finish in the 2018-19 season.

They came into last season with plenty of freshman and only a handful of upperclassmen which meant that they were going to have some bumps in the road.

Their defense struggled from time-to-time and they gave up plenty of turnovers, but that is expected when you have a young team working together for the first time.

Brockmeyer showed off her power and skill in the paint while Silvey liked to flash her shooting abilities from beyond the arc.

The main problem SIU will face this season is the lack of a leader.

With senior guard Kylie Giebelhausen now gone, Southern does not have a true leader of the team and has few upperclassmen to guide the squad.

However I think junior forward Nicole Martin will take charge of the team as she is one of the older ones on the team and she is a vocal leader.

If the team can clean up the turnovers and learn to talk on defense I see no reason why they cannot finish top two in the conference.

The men’s basketball team who will likely begin their season in early November.

The Saluki basketball team has proven me wrong time and time again whether it is good or bad, so I can honestly say I do not know what to expect for the upcoming season.

What I do know is that Southern took unfavorable circumstances and turned it into a second place finish in the conference.

The theme of last season was injuries. SIU suffered injury after injury including a season-ending injury to forward Thik Bol wasn’t able to play a single game in the previous season.

This left them with a six-man rotation, forcing them to play conservative on defense and play at a slower pace on offense.

The main issue that the Salukis will face is the Loyola Ramblers.

After a Final Four finish in the big dance, it’s only logical to think that they will be getting better prospects out of high school and possibly establish themselves as the conference powerhouse.

I do believe that fans will be treated well this year as a majority of the starters will be seniors and will want to go all out in their final season.

With forward Kavion Pippen and Bol controlling the paint, SIU will surely be a credible threat.

With his job possibly being in jeopardy, Hinson will more than likely give everything he has to help finish top in the MVC and keep his position secure.

The common thread that ties all of the teams together is youth.

Even if SIU does not bring home a conference championship this year, I can easily see them winning the conference in any sport the next year or two.

Sports editor Dillon Gilliland can be reached at [email protected] or on twitter @DillonGilliland.