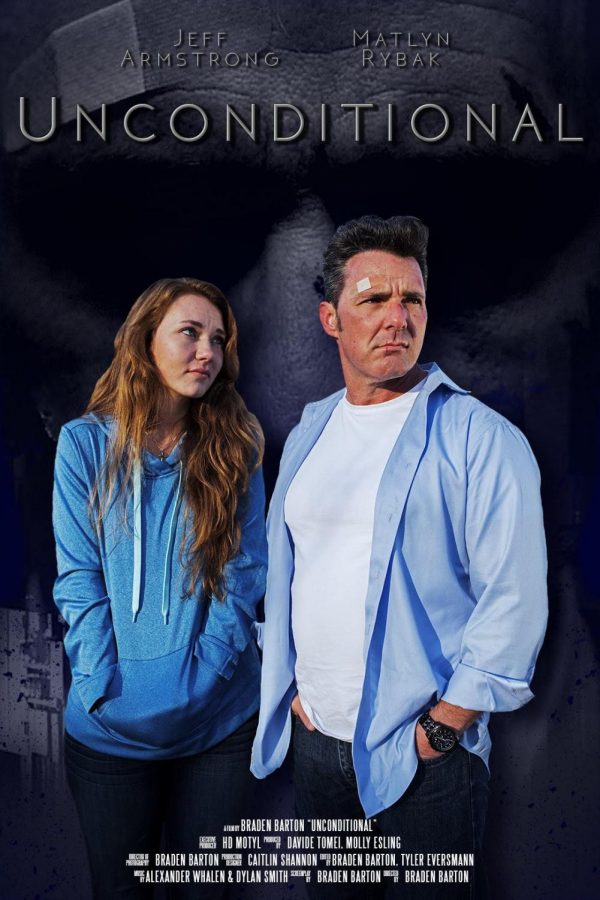 Update: Due to technical issues on Amazon’s end, the film “Unconditional” is releasing Saturday, July 7 on Amazon.

The Southern Illinois University student-made film, “Unconditional”, will be released June 28 on Amazon for world-wide viewing.

The mystery film will be available to rent for $2.99, purchase for $9.99 and is free for Amazon prime customers.

The story follows a seemingly perfect family; Adam Ward, played by Jeff Armstrong, and Evelyn Ward, played by Rae Hunt, are celebrating 15 years of marriage and have a 16-year-old daughter, played by Matlyn Rybak, who was an SIU student. Things begin to change when Evelyn turns up dead and Adam, frustrated with the fruitless police investigation, decides to take matters into his own hands.

2016 SIU graduate and the film’s writer, director and cinematographer, Braden Barton, started the project for his senior thesis, planning for it to be a short film.

“It was thought that due to the fact we were college students, we would be too limited on time, resources, and experience for anything more [than a short film],” Barton said.

Barton began writing the plot from the breaking point of the story, then says he worked himself backwards, asking himself  “What exactly would it take to make a person break like this?”

From that one scene of an emotional breakdown, comes the story of secrets, love and lust.

Barton’s 40 pages of script soon became 124 and, with the support of professor H.D. Motyl as his faculty advisor, sought out more students to help with various other parts of the film, like costumes, production and equipment handling.

“In late October of 2015, Braden had come to me and said that he had this idea for a feature and he wanted to bring me on to produce it with fellow carbondale native, Molly Esling,” said Davide Tomei, SIU alumni and one of the film’s producers. “It was about 30 seconds into his pitch when I was like ‘Yeah! I’m in’, because it was an offer I just couldn’t refuse.”

According to Barton, professor Motyl played a large role throughout the entire project, from working on the script, to giving advice at meetings and even letting the crew shoot a teaser video at his home.

“[Motyl] loved to tell us how crazy we were for trying to attempt such a feat, but he never once told us not to,” Barton said.

Though only the six department heads of the film received class credit, over 50 students, some of whom were involved in the RSO Movie Camera Movement, donated their time to the creation of the film.

“We were all so excited — Braden’s enthusiasm is infectious — so, despite every obstacle, we were all in it for the long haul,” said Molly Esling, SIU alumni and a producer for the film.

The crew shot a majority of the movie in just 20 days, averaging about 6 pages of script per day and sometimes working 18-hours straight.

“We were very fortunate that over that spring break period, even though no one was getting paid, everyone was donating their time and energy to some pretty long work days,” Tomei said.

Actors were found through casting calls and fliers at SIU, in Kentucky and the St. Louis area.

To gain funding for the production fees, the group used the crowdfunding platform Indiegogo, where they raised over $5,000. For lighting and camera equipment, they were granted free packages, courtesy of camera companies, like Canon.

“They believed in the story and in all of us that were attached to it enough to grant us these opportunities, and for that I will be forever grateful,” said Barton. “Without the unbelievably gracious support of these amazing companies and individuals this movie never would have been possible.”

In September of 2016, a rough cut of the film was shown at the Liberty Theater in Murphysboro. It also won an award for the screenplay at the Filmmatic Screenplay Awards and was screened as a selection at the Transylvania Cinema Awards.

Since then the film has undergone numerous changes.

“We re-edited it so it flows much more organically, hired a professional to do the sound design as well as to mix and master the project and had a composer come in who wrote absolutely beautiful music to accompany the film.” said Barton. “Lastly, we went back and color graded the entirety of the film. So in short, it’s an entirely different movie from before.”

Once the film was complete, they pitched it to Amazon with the goal of reaching as many eyes as possible.

“All I want to achieve with ‘Unconditional’ is to make people feel something as they watch it,” said Barton. “I don’t care if they laugh, cry or even if they hate it, in the end they have still felt an emotion as a result of this film, and just to have that opportunity to me is what makes me love making films.”

The full trailer for Unconditional and more can be found on their website.