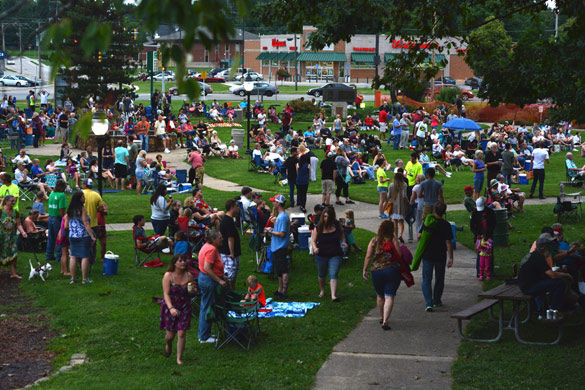 A crowd gathers as the Chris Canas Band begins playing Thursday, July 2, 2015 at Turley Park for the 37th annual Sunset Concert series organized by the Student Programming Council. Tim Porter, 30, attended the concert and said the series is important to Carbondale. "It’s more than just the music that’s coming out being able to socialize with people that are there," he said. "The music is almost secondary for what’s going on." Porter said he was born and raised in Carbondale, and is a longtime attendee of the annual concert series. "The amount of people that changes from year to year when you come out is just amazing to me," he said.

The Sunset Concert Series will be celebrating its 40th anniversary this year throughout June and July.

This year’s events have been dedicated to John W. Corker and Don Castle, both of whom passed away in the last six months.

Corker was the SIU Student Center Director from 1976 to 1995, and helped create the Sunset Concert Series.

Castle was first a Student Center assistant director and then associate director from 1987 until 2017 when he retired.

The concerts, which are free and open to the public, will be every Thursday evening at 7 p.m. starting June 14 and ending July 26.

On June 16, Celebrate 618, a collaborative effort from the City of Carbondale Tourism and several nonprofits, will help kick off the summer.

The events include live street performances, a farm-fresh dinner, art and restaurant pop-ups, and a junior jamboree. For specific event information visit  http://www.celebrate618.com/events/.

Because the concert series typically has a large turn out the event organizers have set in place a few rules for public safety.

Glass bottles, pets, smoking, and solicitation will not be allowed at the events. Underage drinking laws will be enforced and only single-serve containers will be allowed.

For more information on the Sunset Concert Series, visit the Student Center’s website at https://bit.ly/2LLy4w1.

Staff writer Brandi Courtois can be reached at [email protected]