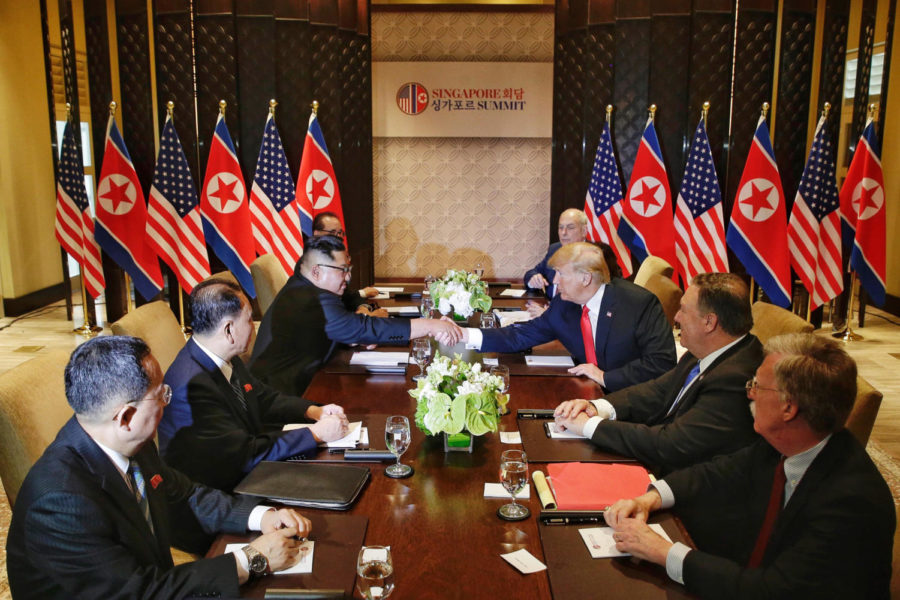 President Donald Trump vowed Tuesday to “start a new history” with North Korea after a summit with Kim Jong Un that produced an agreement only to keep talking  and a promise by the U.S. to stop “war games” with its longtime ally, South Korea.

The Pentagon’s joint military exercises with South Korea have long irritated North Korea, which has denounced them as a pretext for invasion.

Trump said stopping the exercises would save “a lot of money” and described them as “provocative,” a description the North Koreans have often used. He also said he hopes eventually to withdraw U.S. troops from South Korea, although not as part of the current agreement with Kim.

In only the second full news conference of his presidency, after a day when he had lavished praise on the North’s young autocrat, Trump said Kim had “reaffirmed” his commitment to denuclearization of the Korean peninsula.

The two-page agreement they signed, however, only reiterated the same vague commitment Kim made after he met South Korea’s president in April, and offered no specifics of how or when any disarmament might take place.

“We will do it as fast as it can mechanically and physically be done,” Trump said in an hour-long news conference before he boarded Air Force One and headed back to Washington. It will “take a long time” to wind down the country’s nuclear weapons program, he said.

Trump’s willingness to concede a lengthy timetable for denuclearization contrasted with some of his earlier statements in which he demanded that the North Koreans immediately abandon their nuclear arsenal.

A person familiar with the working-level talks between U.S. and North Korean diplomats that set the stage for the summit said the U.S. team had pushed for a commitment from Kim to denuclearize by 2020, when the U.S. presidential election is underway.

North Korea’s representatives balked at the demand for a deadline, the person said.

The document signed by Trump and Kim, and released by the White House, says North Korea will “work toward complete denuclearization of the Korean Peninsula.” It does not offer the pledge of “complete, verifiable, irreversible” denuclearization that Secretary of State Mike Pompeo had insisted was the U.S. objective.

A verifiable agreement would require sending international inspectors to collect information and ensure North Korea lives up to any arms control deal. The country expelled United Nations nuclear inspectors nearly a decade ago.

Trump gave scant attention to North Korea’s brutal treatment of its own population. Asked whether he had brought up Kim’s human rights violations, Trump said they had discussed the matter “relatively briefly” because the talks focused on denuclearization.

He suggested that North Korea did not differ greatly from other nations.

“I believe it’s a rough situation over there, there’s no question about it,” he said. “It’s rough in a lot of places by the way.”

The two leaders pledged to continue talks between their countries, and the agreement said Pompeo would take the lead from the U.S. side. It did not signal the start of a process to normalize U.S. relations with Pyongyang, however.

“Today is the beginning of an arduous process,” Trump said.

In Seoul, South Korean president Moon Jae-in heralded the agreement, saying “it will be recorded as a historic event that has helped break down the last remaining Cold War legacy on earth.”

Moon’s statement did not directly address Trump’s decision to cancel joint military exercises, a staple of the military alliance that emerged out of the 1950-1953 Korean War. Independent analysts argued that the agreement was far less than Trump previously had promised to deliver.

Olivia Enos, a policy analyst at the Heritage Foundation, a conservative Washington think tank, said the president’s decision to suspend military exercises was “concerning.” The exercises, which involve live-fire drills, bomber flyovers and computer simulations, projected U.S. strength and remain a critical part of the alliance between the United States, which has 28,000 troops on the peninsula, and South Korea, she said.

“The joint military exercises … is about more than just countering the North Korean threat,” she said. “I hope that the president will reconsider this move.”

Trump said he found Kim to be “very smart” and “very talented” and praised him for taking over the regime at a young age and being “able to run it, and run it tough.”

He denied that he was lending legitimacy to the oppressive leader of a long-marginalized regime by standing shoulder to shoulder with him. He said sitting at the table with Kim wasn’t a concession.

“I’ll do whatever it takes to make the world a safer place,” he said. “All I can say is they want to make a deal, that’s what I do, my whole life has been deals, I’m great at it.”