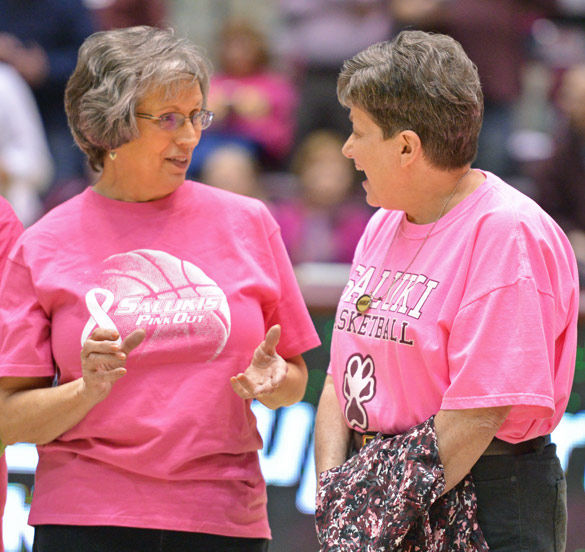 SIU Arena traded in its usual maroon for a more festive pink Tuesday night in honor of “Go Pink” night. The Salukis, in partnership with Southern Illinois Healthcare, worked to raise funds for a new southern Illinois cancer center and promote breast cancer awareness, a disease which affects one in eight women.

The team hit the floor decked out in pink from head to toe. Prior to the game, bids were placed on the game jerseys through an auction on Salukisgopink.com. The top-12 bidders got the opportunity to put the name of a loved one who battled cancer on the back of the jersey.

All proceeds from the auction, nearly $7,000 in total, go to “Hope is Home,” the SIH foundation building southern Illinois’s first cancer center. The Southern Illinois Cancer Center will be on Route 13 in Carterville and is scheduled for completion in 2015.

Part of the festivities was the unveiling of a 22-foot long, 800 pound white beam that will help support the entranceway to the cancer center. The beam has hundreds of colored signatures and messages written on it. The messages include notes to lost loved ones and words of encouragement from cancer survivors. Rosslind Rice, the Communications Coordinator for Southern Illinois Healthcare, said having the beam at the game was good timing.

“We used the game as the last public place people could sign the beam before it makes its final trek to the cancer center,” she said. “The beam, while it won’t be physically exposed once it goes into the infrastructure of the new cancer center, the many messages will remain inside the heart of the building as a symbol of encouragement and strength for all who come through its doors.”

The beam is set to be in the Southern Illinois Cancer Center next week.

At halftime, members of the SIU football team were scheduled to carry the beam down the stairs of SIU Arena and out onto the floor. However, the plan was scrapped because of the sheer weight of the nearly 800 pound beam. Instead, the beam was shown on the jumbo-tron while breast cancer survivors were honored at center court.

Two of the survivors honored at the end of the first half were Carolyn Middleton of Marion and Darlene Shannon from Carbondale. The two ladies met each other in 2010 at SIU Arena and have sat with each other ever since. Both survivors said they were honored by the gesture SIU’s “Go Pink” game showed.

“I think it’s a tremendous thing to be recognized as a survivor,” Shannon said. “To have both the women and the men Salukis and the football team all doing pink out activities is fantastic.”

SIU Basketball coach Barry Hinson also got into the festivities, wearing a pink shirt under his blazer, which as usual was off in the first minutes of the game. Hinson said “Go Pink” night hits close to home for him.

“I’ve got a friend right now that has terminal cancer,” he said. “The biggest thing I like about this is all the money that’s raised is staying local … when you have a need locally, I think it’s important you help that need.”

At the end of the night, there were two winners: the Salukis beat Bradley 75-64 and awareness for breast cancer was raised.

“Hopefully, this will encourage people to get tested,” Middleton said. “I hope this gets more ladies to go and get mammograms.”