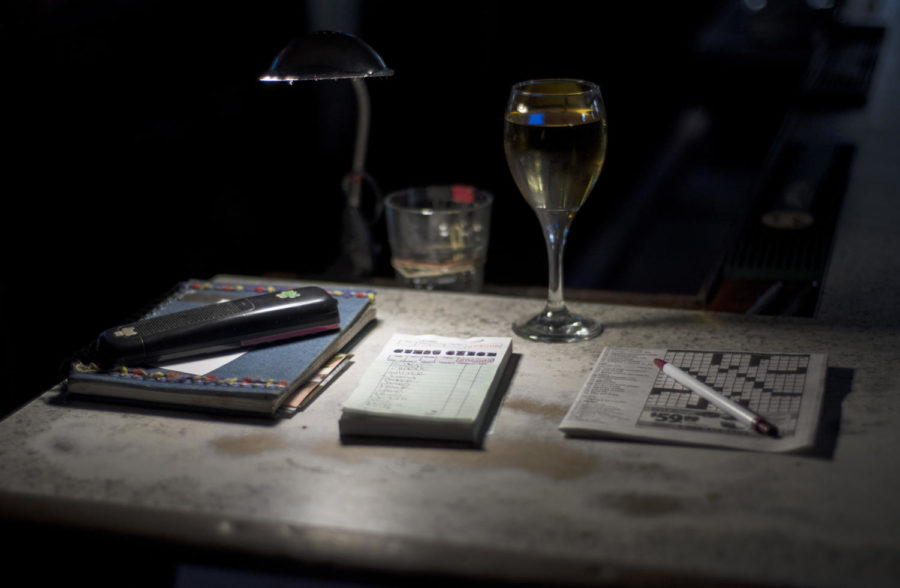 A glass of white wine, a crossword puzzle, a notebook, an order-taking pad, and a phone sit in “Gwen’s spot” after PK’s reopened, Monday, June 11, 2018. PK’s closed briefly after the death of beloved owner Attie Gwendolyn Hunt Saturday, June 9, 2018.

Attie Gwendolyn Hunt, better known to friends and patrons of her Carbondale bar, as Gwen, died on Saturday at the age of 84.

When Hunt and her husband opened Pizza King in 1955 it was the first pizza place in Carbondale. Over the years it became better known as PK’s, a bar that sold lunches to hungry patrons.

A seat was reserved on Monday evening for Hunt at the end of the bar. A glass of white wine sat next to a crossword puzzle, an order-taking pad, a notebook and a telephone. These were items used by Hunt on a daily basis and now serve as a tribute to her time at PK’s.

Patrons who gathered around the bar described Hunt as a second mother to them, and they talked about the times they would come to sit with her and share what was going on in their lives.

Danny Abbott, who worked at the bar in the late ‘90s, said that when he was in trouble she would call him “damn it,” because it almost sounded like his name.

“It was scary,” Danny Abbott said. “Like when your mom uses your full name.”

Danny Abbott said Hunt became like a second mother to him after his own mother passed away. He said that Hunt was a diamond in the rough and a very smart woman.

Robin Krummerics, better known in the bar as Robin Abbott, worked at PK’s from the mid-‘70s until 1983. She said everyone had known Hunt’s passing was coming but it was still a shock.

“We’d sit and talk,” Robin said. “She’d complain and I’d complain. Then we’d hug each other and everything was fine again.”

Curtis Conley, the manager at PK’s, said that Hunt took no vacations. Conley started working at the bar in 2006 and had only seen it closed twice before this week — once when the floors were redone and again when there was a sewage problem.

Conley said that Hunt was caring, stubborn, and tough. “She was her own person,” he said. “And everybody’s mother.”

Conley said he was “out of tears” but was sure they’d come again. “It feels a little colder without her,” he said.

Jim Eagelston, a long time patron, said that Hunt was a really good friend of his.

“She cannot be replaced,” Eagelston said. “There’s not a lot of people like her.”

Eagelston said he used to come into the bar at 8 a.m. to have a coffee and talk with Hunt. “She was very good to a lot of people,” he said.

Hunt rode a motorcycle when she was young and was described as having a tough exterior.

Aug. 11 will be the 63rd anniversary of the bar opening. A celebration of life will be held for Hunt during the event.