The Daily Egyptian • May 25, 2018 • https://dailyegyptian.com/83144/news/former-saluki-lineman-helped-stop-indiana-school-shooting/ 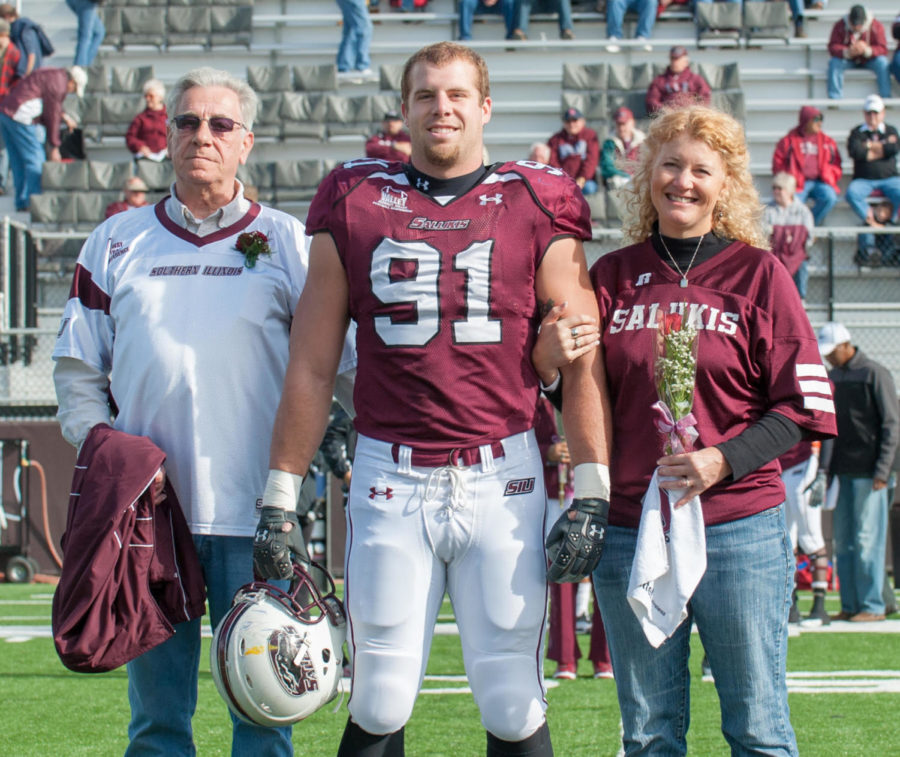 Jason Seaman along with his parents. Image courtesy of Saluki Athletics.

Jason Seaman, a former defensive lineman for the Salukis, was shot three times while intervening to help stop an active shooter at Noblesville West Middle School in Indiana on Friday, the Indianapolis Star reports.

Seaman graduated from Southern Illinois University in 2011 with a bachelor’s degree in elementary education.

He began working for the Noblesville School District in July of 2014. Previously, he’d worked as an instructional assistant at Harrison Parkway Elementary, according to his LinkedIn.

Jeremy Seaman, Jason’s brother, confirmed to the The Indianapolis Star that his younger brother had been the teacher who was shot.

Students and parents told multiple media outlets that Seaman helped stop the shooter, who pulled out a gun and opened fired while a seventh-grade class was taking a test.

“Our science teacher immediately ran at him, swatted a gun out of his hand and tackled him to the ground,” seventh-grader Ethan Stonebraker told the Associated Press. “If it weren’t for him, more of us would have been injured for sure.”

SIU football coach Nick Hill played with Jason Seaman for a year – during his collegiate years at Southern.

“He was a great teammate, one of the team’s hardest workers,” Hill said on Twitter. “You could always trust him to do the right thing.”

“Jason was one of those guys who was willing to go above and beyond and do whatever he could for the team,” Flyger said in a press release, “The reason you get into coaching is to work with guys like him.”

“Jason Seaman represents the best of Saluki values and character. Our hearts go out to his family, friends and students,” Montemagno said.  “We share their hope for his full and fast recovery as well the recovery of the student who was also injured.”

Vice President Mike Pence shared his thoughts for the victims on social media this morning.

“Karen and I are praying for the victims of the terrible shooting in Indiana,” Pence said on Twitter. “To everyone in the Noblesville community – you are on our hearts and in our prayers.”

Seaman is out of surgery and doing “well,” according to an updated post by his mother on Facebook.

The suspect has been taken into custody, according to police.

The shooting comes on the one-week anniversary of the Santa Fe High School shooting that left ten people dead and thirteen wounded.