The Daily Egyptian • May 7, 2018 • https://dailyegyptian.com/82797/sports/southern-loses-season-series-to-indiana-state/ 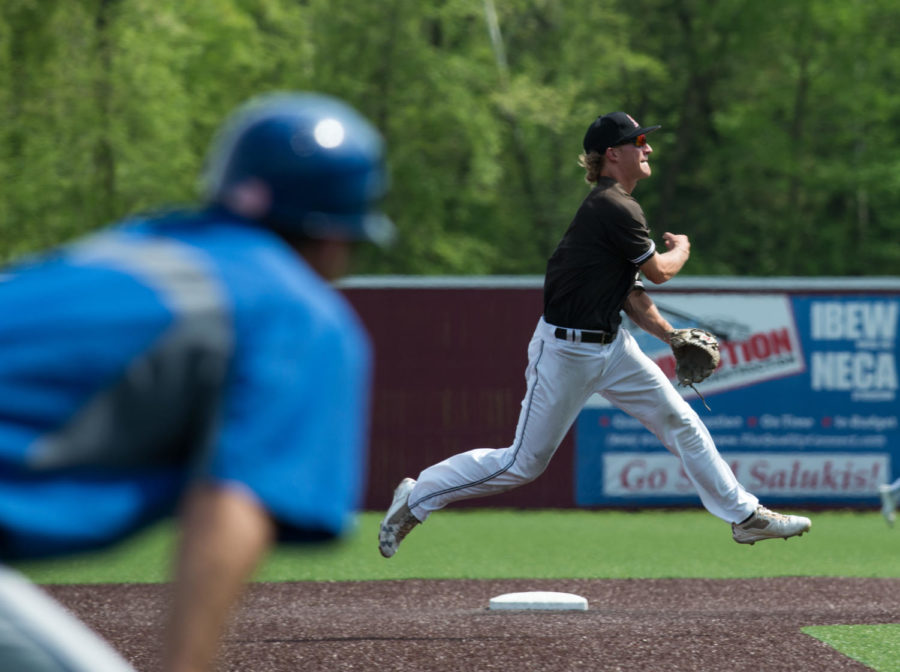 Senior infielder Connor Kopach makes a running throw to first base Sunday, May 6, 2018, during the Salukis' 11-3 loss against the Indiana State Sycamores at Itchy Jones Stadium. (Cameron Hupp | @CHupp04)

Saluki baseball took on the Indiana State Sycamores in the final of the three-game series. Southern could not out-slug Indiana State (24-20, 6-9 MVC) as it lost the game by a score of 11-1, suffering a series loss.

From early on, sophomore starting pitcher Brad Harrison struggled to get ahead in the count, leading to a solo home run from junior third baseman Jake Means that gave ISU a 1-0 lead after two.

The Sycamores kept things going in the third as they put up a single and another homer to left field from junior designated hitter Romero Harris that extended the lead to 3-0.

Indiana State kept the home run trend going in the fourth, but this time with a three-run shot ball from junior center fielder Luke Fegen that pushed the lead to six.

After three scoreless innings from the Salukis, they finally broke the scoring plane with a solo homer of their own from junior third baseman Alex Lyon, who finished the day 2-4 with two one RBI and two runs.

“I’m starting to see the ball a lot better,” Lyon said. “I’m just try to swing at something in the zone.”

Harrison’s outing was cut short after 4.1 innings, and the ball was handed over to senior reliever Allen Montgomery.

After a run by ISU in the fifth, the Sycamores put up two more in the seventh with a run on a passed ball and an RBI single that opened the lead to 9-1.

After two more runs by the Sycamores in the ninth, Southern plated two more of its own with a two-run single by junior left fielder Kenton Crawford.

“They outplayed us in every area,” head coach Ken Henderson said. “They played harder and better than us.”

Harrison (5-4) received the loss after he gave up seven earned runs on eight hits and two walks.

“We didn’t grind out at-bats like we should have,” Lyon said. “Things just aren’t going our way and we need to pick it up in every category.”

SIU (25-23, 8-7 MVC) will travel to Springfield, Missouri on Friday to take on conference leader Missouri State in a three-game series. First pitch is scheduled for 6:30 p.m. Senior pitcher Michael Baird will likely get the start.

“We’re not playing real well,” Henderson said. “We’re going to take a couple days off and get away from the game.”