The Daily Egyptian • May 5, 2018 • https://dailyegyptian.com/82776/sports/saluki-baseball-holds-off-indiana-state-on-rainy-day/ 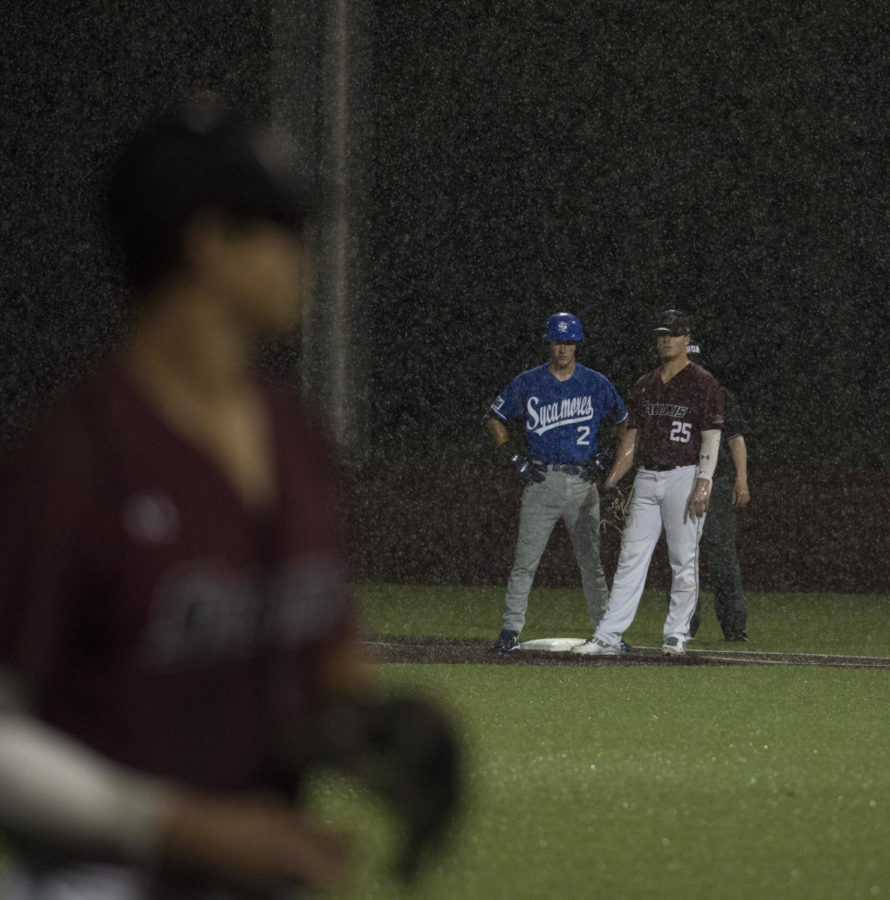 SIU infielder Logan Blackfan and Indiana State infielder Jarrod Watkins watch on as the rain starts to fall Friday, May 4, 2018, during the Salukis' 3-2 win against the Indiana State Sycamores at Itchy Jones Stadium. (Cameron Hupp | @CHupp04)

The SIU baseball team hosted the Indiana State Sycamores in the first of a three-game series on alumni weekend.

The Sycamores found the first run of the game in the third inning as they put men on first and second with single and a walk.

SIU bounced back in the bottom half of the inning as junior right fielder Kenton Crawford walked, followed by a wild pitch that advanced him to second.

With a single by Epps over the third baseman’s head, Crawford scored and leveled the game one run each.

After a walk and a hit by pitch loaded the bases, freshman designated hitter J.T. Weber singled and drove in two more for a 3-1 lead.

Indiana State put another run on the scoreboard later in the fifth with back-to-back singles, bringing them within one of the Salukis.

After seven solid innings of work from senior starting pitcher Michael Baird, he handed the ball over to freshman reliever Trey McDaniel.

McDaniel faced the minimum, setting up the save opportunity for senior closer Ryan Netemeyer.

Despite giving up a double, Netemeyer closed out the game and clinched the save and a 3-2 victory.

“The bullpen was great for us,” head coach Ken Henderson said. “It was the perfect scenario. We got seven from the starter, eighth from McDaniel and ninth from Netemeyer.”

Baird (5-3) netted another win despite a rain delay midway through the game. He allowed three hits, one earned run and seven strikeouts.

“He did a great job fighting through some adversity,” Henderson said.

Epps finished the day 2-4 with one run and one RBI. The freshman left midway into the game with an apparent injury during a diving play in foul territory.

“We need to get him back out there as soon as possible,” Henderson said. “He’s playing phenomenal right now.”

Southern, as a whole, struggled offensively as they collected five hits and struck out six times.

“Runs were hard to come by,” Henderson said. “We barreled up some balls, but the ball wasn’t carrying well.”

“It was a good ball game,” Henderson said. “We had to grind it out.”