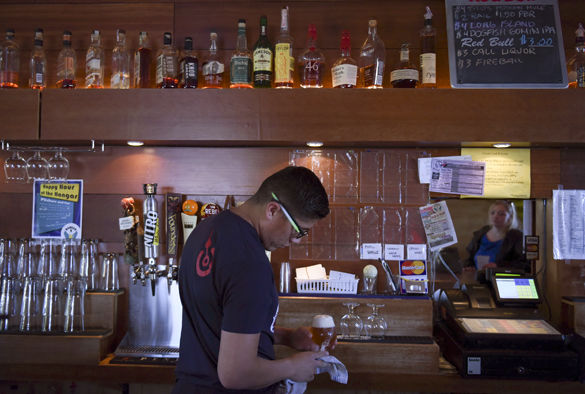 Kellen Lopez, of Long Beach, Calif., dries an overflowing glass of beer before serving it to a customer Thursday, May 5, 2016, at Hangar 9 in Carbondale. Lopez has worked at Hangar 9 for two years and said he enjoys the diversity in Carbondale’s beer culture with respect to types of beer and the age-groups of drinkers. “I enjoy gaining experience from the older generation about why they enjoy the craft expansion of beer as opposed to just drinking your regular Bud Light, Busch Light,” Lopez said. “Right now my favorite beer is the Founders Mosaic Promise. Founders Mosaic Promise is a single hop beer and it’s delicious.” Hangar 9 is hosting the CarbondALE Brew Fest afterparty Friday night and granting free entry to all Brew Fest attendees.

Carbondale’s Brew Fest may be a local event, but it showcases more than just Illinois beers.

Breweries from Alaska, Hawaii, California and New York, among others, will have brews available to sample, according to the Brew Fest website.

“We’ve even got one distributor that’s bringing some [beers] from a couple breweries in Germany,” Moses said.

The event will be at the Town Square Pavilion from 6 p.m. to 9 p.m. on May 4, according to the press release.

This event is put on by Carbondale Main Street in partnership with the SIU Fermentation Science Institute and Southern Illinois Brewers.

“50 percent of the proceeds of this event do go to the Southern Illinois University Fermentation Science Institute,” Moses said.

The SIU Fermentation Science program is one of the newest degree programs and welcomed its first class in 2016, according to the program’s informational page.

The Fermentation Science Institute will use the proceeds it receives from Brew Fest to continue organizing public seminars and workshops, according to the Brew Fest website. Remaining proceeds will be used by Carbondale Main Street to continue revitalization efforts in downtown Carbondale.

This year, Carbondale Main Street has added another aspect to the Brew Fest.

“We [have] a homebrew competition going on, so people will also get tickets to sample homebrews from some of the members of the Southern Illinois [Brewers],” Moses said.

The Southern Illinois Brewers are a local organization focused on creating a community for amateur and experienced homebrewers to connect with one another, according to their website.

The Brewers organized this year’s homebrew competition, according to the press release. Awards will be presented at a ceremony during Brew Fest.

“Usually other festivals like this will just have the breweries, whereas in this regard you’ll actually be able to sit and kind of talk to some of the guys about our brewing in the area and [be] a part of the culture,” Moses said. “I think that’s… what makes us unique.”

After Brew Fest is over, attendees can go to Hangar 9 for the official after party. Brew Fest attendees get free entry to that night’s live entertainment, according to the Brew Fest website.

The after party’s musical entertainment consists of the bands Lords of the Trident, Buzzzard, and 7Daze, according to Hangar 9’s website.

Tickets for Brew Fest can be purchased at the Brew Fest website and at Carbondale Main Street. They will also be available at the event.

Advance tickets are $25 for general admission and $45 for VIP; pricing at the door will be $30 and $50, respectively.

Designated Driver tickets can be purchased at the door for $5, and all attendees (including designated drivers) must be 21 or older.

Staff writer Rana Schenke can be reached at [email protected]