The Daily Egyptian • May 2, 2018 • https://dailyegyptian.com/82707/news/deconstructing-the-reconstruction/ 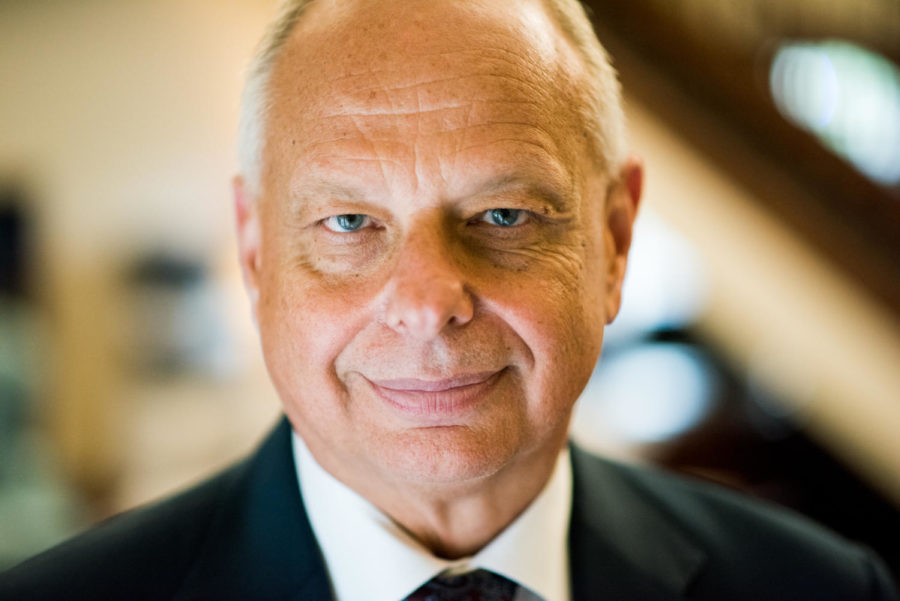 As Carlo Montemagno’s first year as chancellor of SIU’s Carbondale campus wraps up, his academic reorganization plan is anticipated to head well past the initial spring 2018 end goal.

Montemagno’s plan — now in its third draft — takes SIU from eight colleges with 42 departments to five colleges with 20 schools, including the proposed education school, which would be unique in that it would have its own dean and act as an independent entity.

The chancellor unveiled his plan in October with the goal of presenting a final plan to the Board of Trustees by February, with a budget based on the reorganization prepared by April. As the school year winds down, none of the proposed schools have been approved by all voting parties.

SIU President Randy Dunn said in many ways Montemagno bet his chancellorship on the success of this reorganization, calling the initial deadline bold and aggressive, but almost impossible.

“The driver for his selection was that he had proposed putting forward a plan that would address the challenges of the university and would implement shortly after arriving over the course of a year,” Dunn said.

As of Tuesday, 12 of the 20 school proposals had been released to be voted on by faculty. Of those 12, faculty voted on five with three approved to move forward and two rejected, according to data kept by the Faculty Association and Graduate and Professional Student Council.

The proposal for the school of biological sciences was found in need of revision by Graduate Council New Programs Committee and will be submitting a resolution opposing the formation of the school at Thursday’s Graduate Council Meeting. The New Programs Committee did not draft resolutions for the schools of computing and earth systems and sustainability, meaning the schools of earth systems and sustainability and computing will not be voted on Thursday.

Commenting specifically on the proposed school of computing, Flowers said the Graduate Council did not find sufficient rationale for elevating the current department to a school.

Once a proposal has been approved by affected faculty, it is voted on by the Graduate Council and Faculty Association. If approved, it will be considered by the Illinois Board of Higher Education and SIU’s Board of Trustees before being enacted, said Associate Provost for Academic Administration Dave DiLalla. No proposals have yet reached the IBHE or the board.

“This is fine and reflects the time required for thoughtful campus deliberation,” Montemagno said via an emailed statement in response to the slower than anticipated pace at which proposals are going forward. Montemagno declined an in-person interview. “It’s the movement and commitment to the process that are most important.”

A need for change

Montemagno in an October interview with the Chicago Tribune said enrollment continues to drop “because [SIU is] not offering programs that are distinctive and relevant to today’s students.”

This is one of many justifications the chancellor has given about his restructuring announced less than three months after taking over the chancellorship.

“The problem is we have a financial bureaucratic structure in place that prevents faculty from engaging in the innovation and entrepreneurship that they want to put into compelling programs,” Montemagno said of eliminating departments and chairs during the October forum during which the reorganization plan was announced.

Monetmagno’s “top-down” approach “provides rapid response where large change is needed,” Dunn said. The downside of this approach is that there was little work done to establish a support base for Montemagno’s plan early on, he said.

One of the initial selling points was a proposed $2.4 million in administrative costs by eliminating chair positions. That figure is no longer part of the chancellor’s recent public rhetoric.

During a recent  budget hearing in front of the state Senate Appropriations Committee, members of SIU’s administration defended an appropriation of $198.8 million in state funds be allocated to SIU for the next fiscal year compared to $179.9 million proposed by the state.

“I want to provide a private university experience at a public university price, where we know our students and our students get an opportunity that’s extraordinary,” Montemagno said in response to questions about his plan. “My intention is that as we evolve through this process we will then become the bright ruby in the crown of higher education of Illinois.”

In a recent blog post, Montemagno spoke about the SIU experience as a product to sell, saying “reorganization is all about reinforcing, expanding and distinguishing the Saluki experience by making it more visible and accessible to prospective students.”

But there is disagreement on what the SIU product should look like.

Despite numerous blog posts about the proposal’s potential success, the chancellor’s academic restructuring plan has undergone intense scrutiny since its conception.

Some arguments voiced include concerns that the chancellor’s focus on academic structure outweighs enrollment efforts, and that preservation of departments and chairs is crucial.

Montemagno said in a written statement that enrollment will not likely see growth in the immediate school year, but rather in the longer term because of his plan.

“If we combine academic reorganization with current efforts to build experiential learning, student services and campus life through concerts and other events, we will create a total SIU experience that will attract students,” Montemagno said.

Faculty Association President Dave Johnson said it seems like the chancellor is selling his plan as “Come to SIU: Our institution is broken, but we’re working to fix it.” This, Johnson said, makes it not only difficult to advertise but also hinders enrollment.

But Computer Science Chairman Shahram Rahimi said he’s happy the chancellor is addressing program structures.  Rahimi said in the past 17 years as a faculty member during a steady enrollment decline, he was expecting something to change and it never did until now.

“The past three years have been devastating for the university budget-wise, and yet zero things happened other than the regular cuts,” he said.

Rahimi said this reorganization will set the SIU community up for its new reality.

He said since 2014, between 40 and 60 students have been unable to enroll in computer science classes required to begin the major because the department hasn’t had the capacity to teach them. There are currently 13 faculty teaching about 330 students. For this reason, he said, across-the-board cuts have been harmful to his program’s ability to teach all interested students.

Rahimi said the chancellor’s plan has been changing constantly and though he doesn’t agree with every aspect of the plan, he generally is in favor of it and anticipates it can help  enrollment within computer science grow.

Montemagno said in an emailed statement in many departments, faculty are struggling to shoulder all departmental responsibilities.

“We are spending too much time and money on administration, and not enough time on teaching and research,” he said. “Adding to this challenge are outdated ways that our departments function, limiting innovation and collaboration, particularly around efforts to create multidisciplinary programs, team teach and co-mentor students.”

Management Chairman Peter Mykytyn said in proposing a reorganization, Montemagno is trying to break down some of the silos, or barriers, for students in order to make cross-disciplinary training and collaboration more accessible.

“We’ve been mired in tradition and bureaucracy for decades at most universities,” Mykytyn said, adding that though he has no guarantee that this reorganization is going to work, he recognized the chancellor is doing what the Board of Trustees hired him to do.

When it comes to graduate students, Flowers said reorganization shouldn’t be handled in a “one size fits all” manner.

Speaking on behalf of GPSC, Flowers said there is concern that losing departments would show an inability to provide resources and makes graduate programs at SIU seem less elite.

“We need to address these things, otherwise we’re just shuffling around furniture in a burning house,” he said.

Johnson, the Faculty Association president, said the possible loss of a middle man — or chair positions — is troubling. He said it will be more difficult to represent faculty up the food chain if school directors appointed by deans replace faculty-elected chairs.

“It’s a way of sort of mediating what could be a more confrontational relationship in some ways between faculty and administration,” he said.

Johnson said changes including mergers and program closures are necessary, but suggested this proposed rearrangement is “inflicting the maximum amount of disruption and chaos while delaying the hard decisions about where we prioritize our resources going forward.”

He added that if proposed schools are formed, faculty will be faced with mundane tasks such as forming new college committees, deciding on new school names and creating new letterhead.

Though he does not object to the faculty who do want schools, he said insisting everyone undergo a restructuring doesn’t make any sense.

Last month, two college counter-proposals created by various departments across campus in response to those outlined in the chancellor’s academic reorganization plan were introduced to Montemagno and the Board of Trustees during the public comments section of the board meeting.

A faculty proposal for a College of Social Sciences and Humanities is under review by the provost now, and a College of Communication, Design and the Arts is undergoing final draft phases, said Jennifer Smith, interim chair of languages, cultures and international trade.

DiLalla said the chancellor plans to take time to carefully review and discuss the faculty proposals in the hopes of finding common ground and a positive outcome for all parties involved.

Meanwhile, DiLalla said he’s hesitant to put a timeline on approval for the chancellor’s proposed schools, but he did say the administration won’t push out program change plans to be voted on over the summer because faculty will be on break, and therefore not under contract.

However, he said, it is conceivable that both the Faculty Senate and Graduate Council could choose to meet over the summer and vote on the proposals already approved by faculty.

But until any proposal is passed, departments and deans will maintain their status quo, DiLalla said.