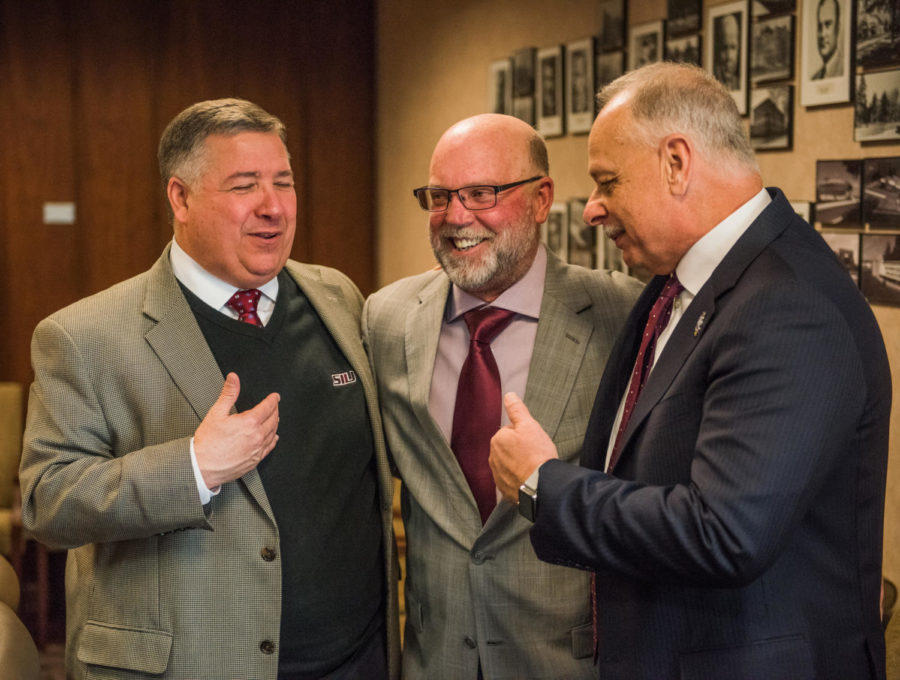 From left: Tommy Bell, SIU Director of Athletics, Jerry Kill, special assistant to the chancellor, and Carlo Montemagno, SIU Chancellor chat Tuesday, January. 30, 2018, after the public announcement of Kill's appointment to serve as an ambassador and fundraiser for the university in Anthony Hall. (Brian Munoz | @BrianMMunoz)

The chancellor announced Kill’s new role after deciding not to renew current Athletic Director Tommy Bell’s contract which expires May 31, 2018.

Bell has served as athletics director since May 2015.

“It’s time for us to make a change in leadership that will help the program fulfill its potential,” Montemagno said according to the release. “I am deeply grateful for Tommy’s service and wish him well for the future.”

Kill will not see a salary increase with his new duties, according to university spokeswoman Rae Goldsmith.

Kill will continue to receive $140,000 through his contract serving as a university ambassador and now head of the athletic program, according to Goldsmith.

Tommy Bell’s salary as current athletic director is $185,000 per year, according to salary data obtained by the Daily Egyptian.

Kill was head football coach at SIU from 2001 to 2007, leading the Salukis to five straight appearances in the Football Championship Subdivision and winning three straight Gateway Football Conference Championships.

Kill left SIU to serve as head coach at Northern Illinois University from 2008 to 2010, delivering three bowl eligible teams and went on to become head coach at the University of Minnesota from 2011 to 2015.

While there, he was named 2014 Big Ten Coach of the Year, sent three teams to bowl games and produced six NFL draft picks. He served as associate athletic director at Kansas State University in 2016 and offensive coordinator at Rutgers University in 2017, retiring from coaching in December, according to a press release.

Montemagno said he has not yet established a timeframe for Kill’s new role and anticipates that Kill will oversee the athletics program for the immediate future.

Photography and multimedia editor Brian Muñoz can be reached at [email protected] or on Twitter at @BrianMMunoz.