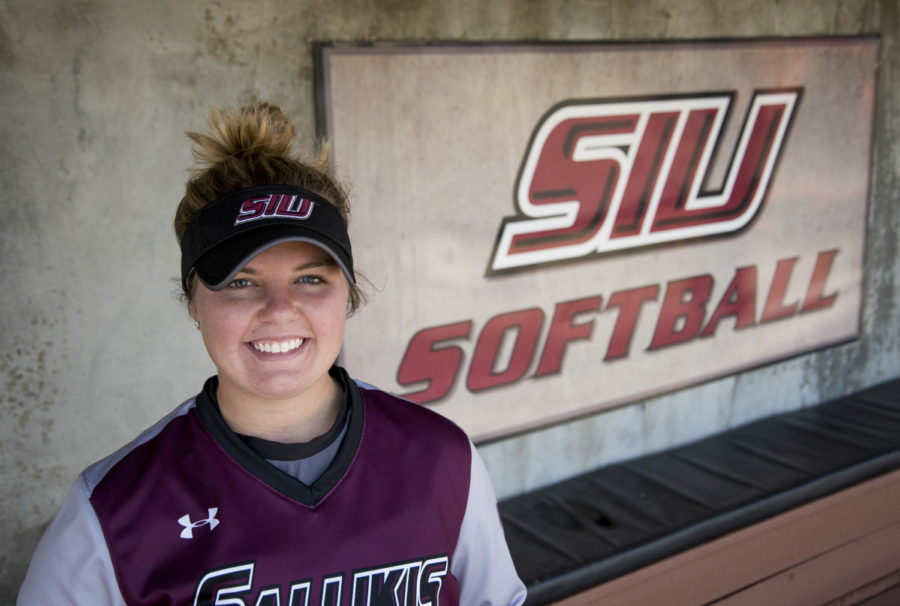 Junior pitcher Brianna Jones poses for a portrait on Thursday, April 12, 2018, at Charlotte West Stadium in Carbondale. Jones has taken the MVC by storm and has earned her spot near the top of starting pitchers in the conference. (Cameron Hupp | @CHupp04)

Junior pitcher Brianna Jones has proven to be a strikeout artist as she fools batters every game with great command in her pitches.

Jones has been playing softball the majority of her life, first picking up the ball and bat when she was eight. She credits her brother for sparking her interest in the sport.

“I watched him play baseball when we were younger,” Jones said. “Then I wanted to play baseball, but I couldn’t play that so I had to play softball.”

The junior started pitching when she was around the age of ten.

“I started off just throwing the ball in my yard,” she said. “I’ve just wanted to keep pitching every day since.”

Jones attended Coffee County Central High School where she played both basketball and baseball, but quit basketball her sophomore year under the advisement of Southern’s softball head coach Kerri Blaylock.

“When you have someone who can throw like she can, you want to do everything you can to keep her from getting hurt,” Blaylock said.

During her time in high school, Jones earned several awards including Pitcher of the Year three times, All-District three times and finished with a career ERA of 0.75. After her time in school came to an end, her jersey was retired.

Blaylock noted those championships are the reasons she began recruiting Jones.

“I figured if you were winning national championships at that age then you had to be pretty good,” Blaylock said. “The first time I actually saw her, she was throwing straight gasoline and that’s when it all started.”

After high school, the Jones visited both SIU and Middle Tennessee State University but decided to sign with Southern because of the relationship she had already formed with Blaylock.

Carbondale was also the ideal distance from home for the Saluki pitcher.

“It was far enough away that I could be on my own,” Jones said. “But it was close enough so that my family can come watch me play on the weekends.”

During the transition to college, Jones said that sports were not the biggest adjustment for her.

“Sport-wise the only thing I had to do was get better at hitting my spots,” she said. “Schooling was the biggest adjustment because in high school I liked to skip a lot, but here I can’t do that.”

In her freshman campaign, Jones hit the ground running with a 23-11 record in 42 appearances. She maintained a 1.92 ERA and struck out 158 batters with .228 opponent batting average. Her 23 wins and 10 shutouts led the MVC in both categories.

That stat line earned her First-team All-MVC, a top-10 finalist NFCA National Freshman of the Year and earned MVC Pitcher of the week and MVC Newcomer of the Week three times each.

“I don’t really think about that stuff,” the Saluki ace said. “It’s really just another thing for me.”

The Saluki pitcher credits senior pitcher Savanna Dover for mentoring her during her freshman campaign.

“We are around each other so much,” Jones said. “She guided me in the right direction.”

Jones did not slow down any her sophomore year as she finished with a 2.14 ERA and 128 strikeouts with an opponent batting average of .242.

So far in her junior campaign, the pitcher has averaged a 1.94 ERA with 149 strikeouts and a .248 opponent batting average at the time of writing.

However, Jones said she is not satisfied with where her numbers are at.

“I’m having issues right now,” Jones said. “I’m going to work through it and it’ll be fine.”

Despite her level of success, the Saluki pitcher has no interest in playing post-collegiately following next season.

“I’m done after this,” she said. “I’ll probably miss it though.”

Although her SIU career will end in 2019, her coaches and teammates will remember the type of player and leader that Jones was.

“I have only caught for one other person that can pitch like her,” sophomore catcher Katelyn Massa said. “Her mentality is the best of the best and she always wants to win.”